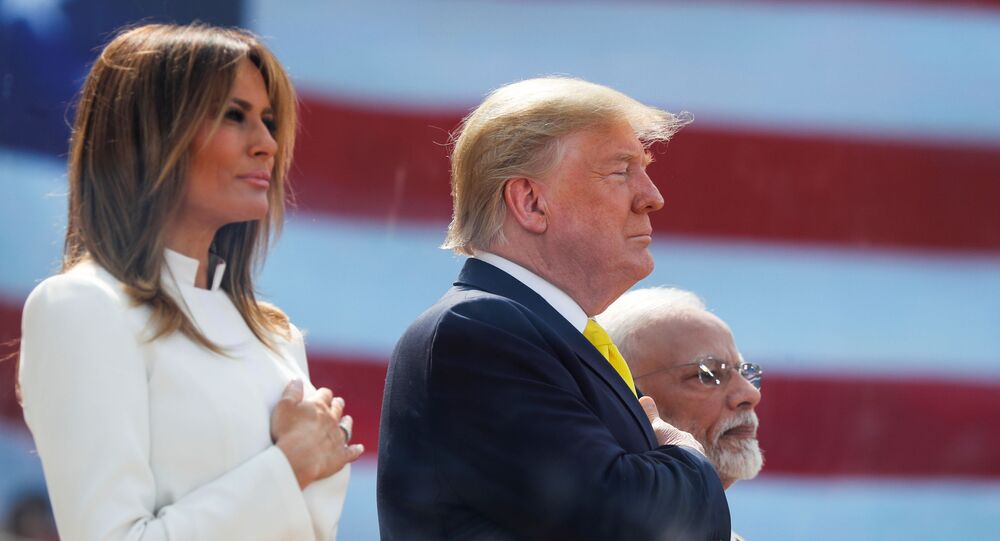 The US president's visit to India has ushered in a new era in relations between the two countries, opines Amrita Dhillon, an Indian foreign affairs analyst, praising Donald Trump for not meddling in the country's affairs over Kashmir and the Citizenship Amendment Act (CAA).

Donald Trump's official visit to India in February once again demonstrated that the US administration is determined to strengthen ties with the Asian giant amid Washington's cooling of relations with the People's Republic of China.

During his visit Trump evaded sensitive political issues such as the Kashmir legislation or the 2019 Citizenship Amendment Act (CAA) regardless of bipartisan calls from the US Congress to address the situation. The US president made it clear that it's up to India to solve its domestic problems. Previously, Trump's offer to mediate its dispute with Pakistan over Kashmir was rejected twice by New Delhi, in August 2019 and January 2020. The president's India strategy appears to be paying off as the two countries concluded $3 billion worth of defence deals with a further $8-10 billion-worth of accords in the offing, according to India Today.

Amrita Dhillon, a foreign affairs analyst and founding editor of a New Delhi-based magazine called The Kootneeti, believes that the US-India relationship has got on the right track under Trump.

Sputnik: What's your take on Donald Trump's visit to India? What do Indians think about the American president? Has the attitude towards the US changed for the worse or better under Trump? What are the reasons for that?

Amrita Dhillon: Donald Trump's visit indeed marks a new era in India-US relations. This is five years since an American president has visited India, which saw a huge change in its global position. Five years ago one cannot even imagine that an American president will visit India while keeping an eye on the potential of four million Indian-American voters.

Here is how @POTUS was welcomed in Ahmedabad.

Together, we will keep working towards deepening bilateral ties between India & USA. pic.twitter.com/18phrcHbx8

​People in India have an extremely positive view of President Trump's visit as this not only shows a bonhomie between the two world leaders but it also projects India as a rising figure in the global theatre. In fact, President Trump's speech instantly became the talk of the entire nation. It appears that a strong nation of more than a billion people was united to welcome President Trump.

​A big change in attitudes toward the US leadership is because of the personal bonhomie with Indian Prime Minister Modi and the other reason is a separate big fan-following of the president himself, which is bigger than any other US president has ever enjoyed.

Sputnik: Trump called Modi a "tough negotiator" and "tariff king" as the two countries continue to be engaged in a "mini trade war". An official 2019 US report said India's tariff rates on other members of the World Trade Organisation (WTO) remain "the highest of any major economy". What's behind India's tough position and under what conditions could the two countries reach a mutually beneficial trade deal?

Amrita Dhillon: That's right, PM Modi has a good record of working under sanctions and tough trade conditions. Modi was the chief minister of Gujarat when the US imposed sanctions on India, and his work under such conditions was remarkable. So a title of tough negotiator is reasonably suited.

Average tariffs in India are indeed much higher than in the world's major economies. But when we talk about specific products we will see that countries like Japan or the US levy much higher tariffs than India. For example, the US imposes a 350% tariff on certain types of tobacco; South Korea has been imposing a 513% tariff on imported rice since 2015; and Japan levies up to 736% tariff on certain products.

In fact, the US has imposed tariffs on more than $360 billion worth of Chinese goods in its trade war with Beijing.

However, this must be moved towards a smoother trade flow and the biggest barrier to it I believe is the Indian bureaucratic red-tape culture. Even though Modi has given the go-ahead to close a deal, the US understands this won't be easy under a slow inter-agency process plagued by many bureaucratic hurdles.

Here the first step should be a discussion on the political level, between US trade representative Robert Lighthizer and India's Commerce and Industry Minister Piyush Goyal. India is in need of a trade deal [with the US]. If the goal is to become a $5 trillion economy then a trade deal will be a boost to Indian exports which have been under pressure for a long time due to slowdown.

Sputnik: What do you think about Washington's attitude towards the Kashmir issue? It was reported previously that the White House was eager to broker an agreement between Islamabad and New Delhi but Modi rejected US assistance. What's the reason for that? Does India consider the US offers as interference in the country's internal affairs?

Amrita Dhillon: Kashmir has remained one of the very sensitive points in India's relations with the United States and it created a lot of displeasure among Indians when Trump earlier said that he wishes to mediate the Kashmir issue between India and Pakistan. Indians have fought three wars over Kashmir where several thousand soldiers and civilians have lost their lives. India rejects US assistance as Kashmir is the place where India is dealing with the cross border and proxy terrorism, unlike Afghanistan where the people are facing Taliban terror and more parties are required to mediate [the problem].

​It is a bilateral issue which has to be resolved by talks between India and Pakistan only. And this is what President Trump said, in his speech during this visit, that "India and Pakistan is working on it and they'll solve on their own". However, to reach the terms of bilateral talks New Delhi's policy is clear - "Talks and terrorism can't go together". Pakistan every time has betrayed [India], whenever it comes to talk over terrorism.

The Citizenship Amendment Act is also an internal issue. On which President Trump said, that "it is up to India and hopefully it is going to make the right decision for its people". This is what the government is ensuring; that it is not intended to target its own people, it is to give shelter to the persecuted minorities from the three neighbouring countries, i.e. Bangladesh, Pakistan, and Afghanistan. India would rather like to hear the world standing against the persecution of minorities in those countries than criticism of India’s policy aimed at giving shelter [to destitute people].

Amrita Dhillon is the founding editor of The Kootneeti, a New Delhi-based publication on International Relations & Diplomacy.