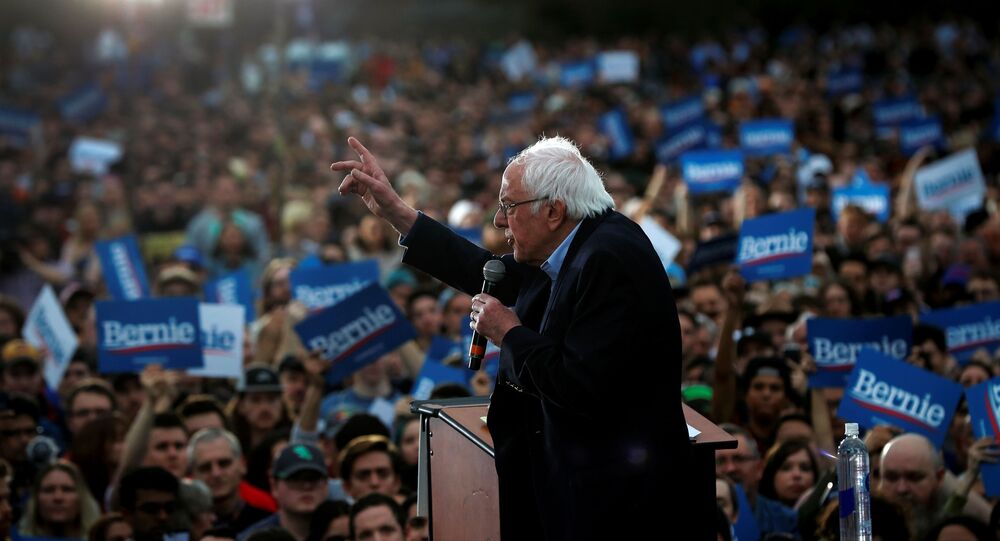 Democratic candidates will participate in the Tuesday debate in Charleston, South Carolina, ahead of the state’s primary on Saturday. With Sen. Bernie Sanders (I-VT) continuing to lead in national polls, moderate Democrats could soon see the end of their reign, Ted Rall, an award-winning editorial cartoonist and columnist, told Sputnik.

Rall told Loud & Clear hosts John Kiriakou and Brian Becker on Tuesday that Sen. Elizabeth Warren (D-MA) and former US Vice President Joe Biden “are the two candidates that I am looking at hardest now.”

“My prediction will be that Biden will probably carry South Carolina by about two to three points, which is effectively a loss, because he was supposed to win that by 20-plus points. Bernie Sanders is the first candidate in modern electoral history to have effectively won all three of the first primary contests, and he’s going to come into this effectively with a tie with Joe Biden,” Rall said, noting that “Super Tuesday” comes just three days later, when 13 US states will hold primary elections and the territory of American Samoa holds its caucuses.

Sanders most recently won the Democratic primary in Nevada on Saturday after tying with former South Bend, Indiana, Mayor Pete Buttigieg in the Iowa caucuses and beating him in the New Hampshire primary. Although South Carolina is Biden’s redoubt, the latest CBS poll shows that he is only slightly leading Sanders in the coastal state 28% to 23%.

“Joe Biden has embarrassed himself with this run. Someone should have called out the fact that he is just obviously not in a mental place to run for president, much less serve as president, and it’s an embarrassment for the moderate wing of the Democratic Party who basically hired him, recruited him in order to take out Bernie and instead ended up becoming a contributing factor to the rise of Bernie,” Rall explained.

“The short-term fear of the moderate and centrist Democrats who've been running the parties is they’ll no longer be running the parties. In terms of the establishment class, who are warning that the stock markets are going to tank if Bernie Sanders is elected … there’s deep rumbles that we’ve seen through strains of the Occupy Movement - and even Trump’s victory in 2016 over an establishment candidate in the form of Hillary Clinton - and now Bernie Sanders’ rise, which is surprising to people who have not been paying attention to what is going on in the Rust Belt and the hollowing out of the middle class and the working class in this country. And they just don’t want to see anything that approaches a working class movement emerge - a real left come out of electoral politics,” Rall added.

While Sanders has made his policy stances clear, other Democratic candidates in the race lack clear platforms, Rall noted.

“I also think there is something else going on. There's a deep yearning for a recognition that hard work should result in real pay, but there’s also a desire for specifics in politics. When you listen to these moderate candidates at these debates, what’s striking is the level of pablum. There’s not specific policy points. There’s not specific programs … They’re proposing literally nothing. Bernie Sanders has a consistent, clear understandable platform that - whether you like it or not - will make changes that will change things for people’s lives,” Rall told Sputnik.