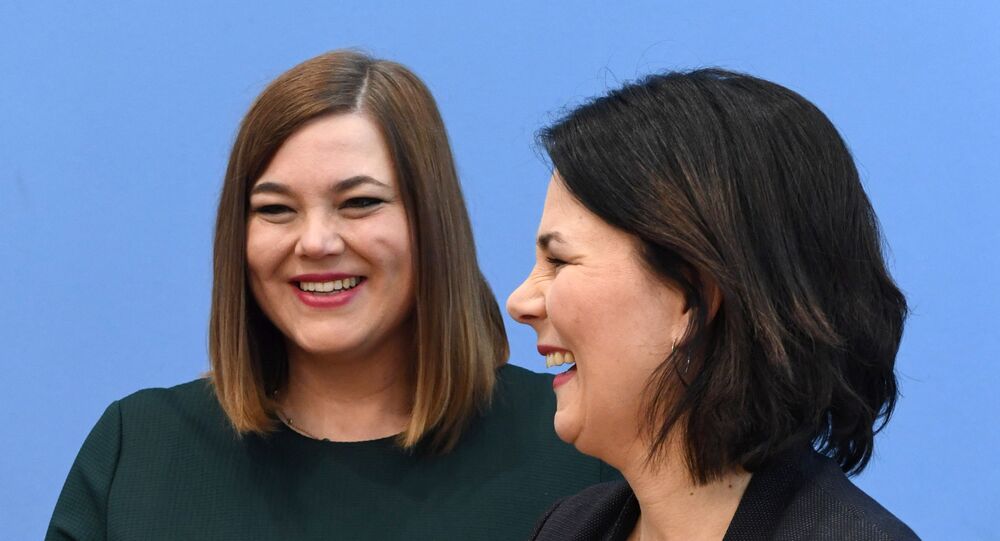 BRUSSELS (Sputnik) - The recent elections in the German port city of Hamburg resulted in a victory for the Green party, following similar surge across the country, and a defeat for the Christian Democratic Union (CDU) coming on the heels of a scandal in another regional vote.

Earlier in February, the CDU voted with the right-wing Alternative for Germany (AfD) party to elect Thuringia's state premier. Thomas Kemmerich of the Free Democratic Party won by one vote and was criticized heavily by relying on AfD, while the CDU also faced outrage over breaking the so-called cordon sanitaire around the right-wing party.

In Hamburg elections, the Social Democratic Party of Germany (SPD) secured 54 seats — fewer than needed for the majority in a 123-seat parliament and four seats down from the previous election, although still a better result than any other party.

According to Imanuel Marcus, an analyst and journalist for The Berlin Spectator, originally from Hamburg, "[t]he SPD's victory is all about Hamburg and the Mayor."

"During his years as Finance Senator, Peter Tschentscher was seen as a reliable politician who would persistently stick to his rather conservative approach. That is why even former CDU voters support him. Besides, Hamburg has been a red city state most of the time," Marcus said.

The Green party, which was the SPD's coalition partner in the previous Hamburg government, surged from 15 seats to 33.

"Regarding the Greens, the Hamburg victory is comparable to the situation on the federal level, in a way, since they are as strong in nationwide polls as they are in Hamburg. On the other hand the situation is not comparable at all: In Hamburg, the Greens doubled up, but did not manage to overtake Tschentscher, which is what they had wanted. On the national level, there is nothing to overtake, meaning the Greens are much stronger than the SPD already, which is why they are being seen as the CDU's future coalition partner," Marcus commented.

Ulla Jelpke, a member of the Bundestag and a domestic affairs spokesperson for Die Linke (The Left) party sees the Greens' success in Hamburg as a continuation of the nationwide trend of the last several years.

"It is normal since the question of climate change has come to the fore in the public interest. The Greens also benefit from the political climate created by 'Fridays for Future' [a climate strike movement founded by young activist Greta Thunberg]. Their voters coming from the traditional parties spectrum, simply ignore the Greens’ great sin — the approval of the NATO war against Yugoslavia and the introduction of Hartz IV [social welfare reduction] in the SPD Greens government by Chancellor [Gerhard] Schroeder," Jelpke said.

Die Linke won 13 seats in the latest Hamburg election, an increase of two compared to the previous vote.

Meanwhile, Chancellor Angela Merkel's CDU lost five seats, down from 20 in the previous election. CDU Secretary General Paul Ziemiak decried the results as "a bitter day" for the party, adding that the events in Thuringia "did not help."

For Jelpke, the defeat of the CDU was "to be expected."

"The local SPD is economically liberal and the dominant bourgeois party, while on the other hand, right-wing conservative and extreme right-wing forces support the AfD. Difficult for the CDU to position itself," Jelpke said.

AFD UNDER SHADOW OF HANAU

The AfD, known for its harsh stance on immigration,  ended up with seven seats, one fewer than in the previous election. According to Markus, the party is "declining."

"At this stage, Hanau does hurt them and they know it. AfD representatives even started using the expression 'right-wing radical' in connection with the terror attack, in a cheap attempt to hide the fact that they are extremist right-wingers themselves," the analyst said, referring to a recent attack in the state of Hesse, which, according to the authorities, likely had racist motives.

The AfD has condemned the shootings in Hanau. Patrick Moreau, a political scientist at the French National Centre for Scientific Research, argues that the Hanau shooter "has nothing to do with the AFD."

"It is clear from all the documents seized that he was a conspiratorialist, American-style," Moreau said.

AfD leader at the German parliament, Alexander Gauland, told reporters on Monday that the party had been "marginalized" and "baited."

The AfD won 94 seats in the federal parliament in a surprise upset in 2017, while the CDU and the SPD both suffered heavy losses.  However, next year, another federal election will offer a new test to the Germany's political landscape.