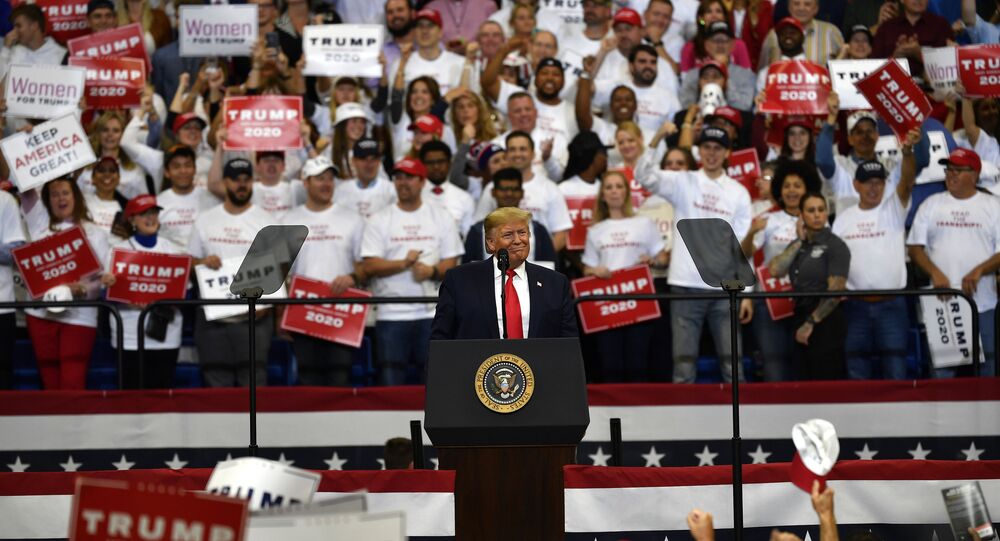 The #WalkAway movement launched in mid-2018 has already brought hundreds of thousands under its banner across the US. The nationwide campaign's founder, Brandon Straka, a newly converted Republican, explains why he turned his back on American liberals and why he's calling upon his former party loyalists to join him.

Brandon Straka, a hairstylist and actor from New York City who is openly gay and voted for Hillary Clinton in 2016 would make a perfect liberal icon but with one crucial proviso: he no longer is liberal.

On 26 May 2018, Straka released a video that swiftly got hundreds of thousands of views on YouTube. “Once upon a time, I was a liberal,” he started off, explaining why he had broken with the Democratic Party and shifted to the right.

Please watch this if you can. @BrandonStraka started a movement called #walkaway and there are bunches of testimonials from all sorts of people who left the radical Dem party of today if you YouTube: #walkaway 🙂 https://t.co/igIuPEzmuN

​A longtime believer in the Dem-proclaimed agenda of tolerance and human rights protection he witnessed how the left had devolved into "intolerant, inflexible, illogical, hateful, misguided and ill-informed" group that was absorbed by the very characteristics they claimed to fight against.

On the top of this, according to Straka, American liberals have been manipulating information and producing hoaxes, including the Trump-Russia "collusion delusion". This is why he "walked away" from the Democratic Party and this is why he is urging others to do the same.

“In January of 2017, I bitterly proclaimed on social media that I would never be able to understand how anybody could vote for a man who stood before a cheering crowd & mocked a reporter’s disability.
That’s when somebody sent me this...”
SEE FULL VIDEO: https://t.co/HPihnCtVZn pic.twitter.com/m7P5bxbibY

​"I launched my campaign because I realised after the election of Donald Trump in 2016 that the liberal media that I had trusted my entire life as a lifelong Democrat myself was being incredibly dishonest, incredibly deceptive and in many circumstances creating entirely false narratives and driving false stories about who Donald Trump is, who his supporters are, what Republicans are all about", says Straka. "I really discovered due to his election the ways in which the liberal media was manipulating the notion of racism, homophobia, bigotry, etc. and kind of almost glorifying hate-crime hoaxes and other things like this, while demonising Donald Trump and his base".

The #WalkAway movement kicked off by Straka has to date brought together more than half a million people who joined the movement on all of the social media platforms, according to the founder. There are also tens of thousands of written and video testimonials by people who decided to follow Straka's suit.

“I was a Democrat for 50 years. I changed my voter registration last week. I’m just sick and tired of what the Democrats are doing.”#WalkAway #UNSILENT https://t.co/fLQNHaUFr6

​The campaigner highlights that the movement is gaining momentum: "Every day we are getting new testimonials from black Americans, from Hispanic Americans, LGBT Americans, it's truly a movement for all people of all backgrounds to leave the Democratic Party".

Despite movement is widely spread across the US it has got little if any coverage by the American left-leaning mainstream media.

"When they do cover it, they lie about it", Straka highlights. "I mean all the coverage we've really got is them saying that this is a 'Russia propaganda' and 'Russian bots'. I think that they find this movement to be very disturbing and very scary and a real threat to what they are doing and that's why I think they engage in the very tactic that caused me to walk away in the first place which is deceptive media, yellow journalism, mistruth to drive their narrative and try to hypnotise and brainwash the American people into believing false narratives and controlling their behaviour and ultimately controlling the way that they vote".

Furthermore, one can see how the Dems are pushing towards "anti-Americanism" by which Straka means anti-capitalism, anti-constitutionalism, a socialist and globalist political agenda – "all these things that Americans have traditionally rejected and that are antithetical to what has made America successful in the first place".