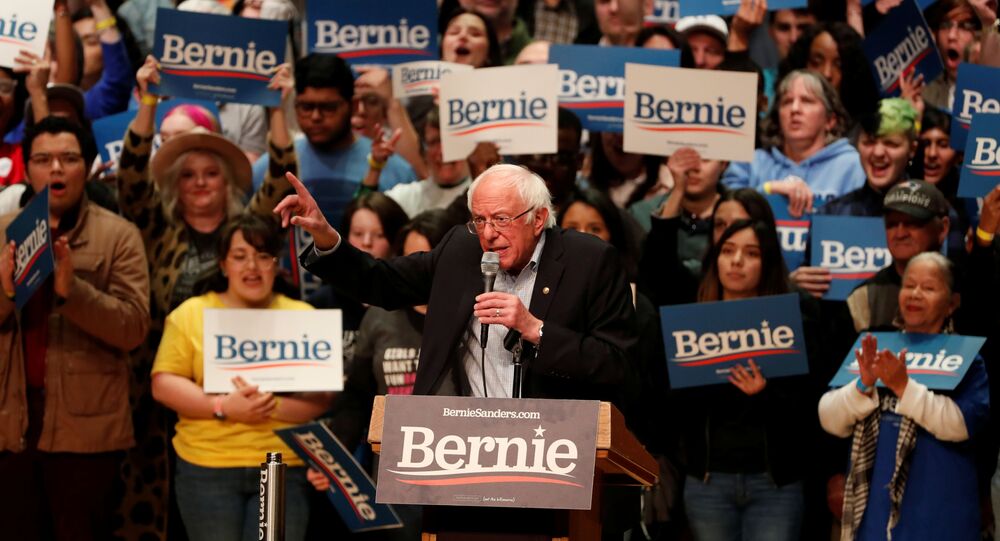 Bernie Sanders remains the most electable Democratic candidate, says independent American journalist Max Parry explaining why the Democratic Party might regret it if it uses 2016-style "machinations" to deprive the presidential candidate of the nomination again.

Self-described Democratic Socialist Bernie Sanders, a US senator from Vermont and the longest-serving independent in congressional history, is leading in all 10 national polls released this week ahead of the 22 February caucus in Nevada, Newsweek highlighted Wednesday.

Echoing the magazine, CNN admitted the next day that "stopping Bernie Sanders just got a lot harder", foreseeing that the Democratic presidential candidate will win Nevada, California and Texas and come in second in South Carolina.

Even David Plouffe, former Obama campaign manager, said Thursday that "Sanders in all likelihood is the nominee, unless it gets taken away from him at the convention".

However, Max Parry, an independent American journalist and geopolitical analyst, says that regardless of the polls, Bernie has to secure enough delegates to get the nomination.

"We could very well see a return of the superdelegate scheme to deny him the nomination like it did in 2016", the journalists highlights. "Based on the sheer amount of candidates running this primary, it is possible that no candidate including Bernie could secure enough (nearly 2,000 needed) by the first round. If that occurs, the superdelegate problem could rear its ugly head again".

In June 2016 Hillary Clinton reached the required number of delegates, including both pledged and superdelegates to secure the nomination which prompted her Democratic contenders to lay arms and endorse her. However, while Sanders formally signalled his support to Clinton on 12 July 2016, just ten days later WikiLeaks released documents suggesting that the Democratic primaries were rigged and biased against Bernie Sanders.

"The whole reason the superdelegates were introduced was to shift control from voters to the party establishment to prevent this exact scenario where someone like Sanders, a politician favored by voters but not the party elite, were to have a chance at the nomination", Parry elaborates. Today nearly a quarter of all delegates are reserved for the party chairs and congressional representatives".

According to the journalist, this trick would not work twice for Sanders because "if the party leadership were to do this, it could cause irreparable damage to the party and significant upheaval among voters".

Parry emphasises that it's unlikely that Bernie's supporters "will tolerate this and go quietly" like they did in 2016, "even if he concedes and tries to get his followers to sheepdog for another establishment candidate after they rig the nomination against him again".

"The tactics of trying to sabotage Sanders seem to be actually propelling rather than hindering his success this time around, especially with the media as their bias is so transparent", the analyst underscores. "We could see a shakeup in the Democratic Party in the event they use the same machinations to deny Sanders the nomination, even a potential split of the party or a third party run by Sanders".

Will Michelle Obama Jump In to Save the Day?

Meanwhile, there is visibly no consensus among the Democratic hopefuls which prompted former Senate Majority Leader Harry Reid suggested in his Wednesday interview with NPR that Barack and Michelle Obama could step in a broker a deal between the candidates ahead of the nomination vote.

"Maybe we could even get Barack Obama to do it", Reid said. The two most popular people in the country, and perhaps the world, are Barack and Michelle Obama".

Commenting on the issue, The Daily Caller noted that it is not the first time that one has foreseen that Obamas could influence the 2020 race, citing Fox News host Tucker Carlson's prediction that Michelle Obama may jump in in the presidential contest "if Democrats did not coalesce behind a clear nominee".

"I don't believe Michelle Obama qualifies as a consensus candidate nor do I see her entering the race", says Parry. "I do see the party leadership backing what they view as an actual 'consensus' candidate like Elizabeth Warren if they railroad Bernie with superdelegates again".

He recollects that Politico reported a few months ago that because of Warren's rhetoric about Wall Street "she is viewed by the party elite as a safe compromise between the two extremes of Biden and Sanders".

However, there's only one Democratic candidate that absolutely has a chance of defeating President Donald Trump and this is Bernie Sanders, Parry underscores: "Polls almost universally show him with a narrow lead over the Republican incumbent especially compared to other candidates who are all slightly behind Trump", he says.