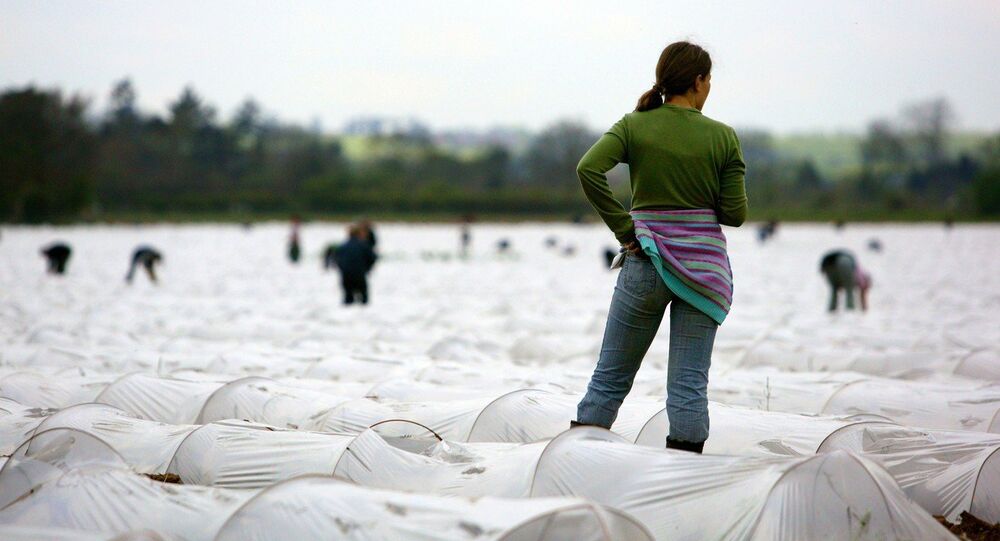 The British government has unveiled plans to revamp the UK’s post-Brexit immigration system. Work visas for low skilled migrants will now be curtailed and a new focus will be put on investing in training programmes for British citizens.

The desire to control immigration was, of course, one of the key reasons why the UK voted to leave the EU in 2016. With many claiming that the bloc’s freedom of movement policy contributed to wage stagnation, increased property prices and overpopulation in large cities.

Journalist Marcus Stead gave his views on whether the new plans put forward by the Conservative Party will finally placate the British public’s worries.

Sputnik: How will the British government’s new immigration policy affect the country’s economy?

Marcus Stead: The government is today outlining what its immigration policy is going to be, once the transition period comes to an end, and it’s clear that there is going to be a points-based system, with an emphasis on the skills of the individual, skills shortages in the UK, and a minimum salary threshold for the position you’ve been offered, so that you are likely to be a contributor to, rather than a beneficiary of the benefits system.

As Home Secretary Priti Patel says, this will now be a level playing field, so somebody from Australia will not be at an advantage over somebody from France, or vice-versa more to the point perhaps. The big problem is, who is going to pick the fruits in the fields of Lincolnshire in the summer? Who is going to wipe the tables of the coffee shops of London? Who is going to clean the toilets of the hospitals up and down the country?

It’s true to say that an oversupply of cheap labour in the UK has led to a suppression of wages in low skilled jobs, but even so, there is a cultural problem in the UK in that a lot of young people in particular seem to think that they are above doing these sorts of jobs. And the reality is for the most part, employers have also spoken very highly of labour from places like Poland, they have a good work ethic, they can be trusted to turn up on time and do an honest day’s work.

How do we replace them? These types of workers wouldn’t do very well under the proposed new points system, and I suggest that it would come hand in hand with benefit reform. Despite the rather clumsy and sometimes downright cruel attempts at benefit reform with the rollout of universal credit in recent years, the UK welfare bill went up from 253 billion pounds in 2013 to 264 billion pounds in 2017.

Whatever you may think of Iain Duncan-Smith’s reforms, it was really tinkering around the edges, and this rocketing bill is not sustainable in the long term. So the government needs to think big when it comes to tackling welfare dependency, and bluntly, that means that welfare should only really be for pensioners, the genuinely disabled, and temporary help for the unemployed as they find alternative work. Pretty much everything else will be unaffordable long term, as the reality is that we are living longer, pensions are costing more year on year, and a very large number of people rely on the state because of social breakdown, and a decline of the traditional family unit.

There’s a carrot and stick element to this. The stick is that low skilled unemployed people need to be told that they are not above picking the fruit or wiping the tables, and the carrot is that ending uncontrolled mass immigration will put an end to the suppression of wages caused by an oversupply of cheap labour, and therefore wages should rise in the long term.

That cultural shift will not prove to be an easy one. We need to return to the work ethic of previous generations, our grandparents' generations, where welfare dependency was frowned upon.

Sputnik: Will the UK be able to negotiate a post-Brexit free trade deal with the EU?

Marcus Stead: We need to get real about what’s happened here, and about what’s on offer. Last Thursday the UK’s Chief EU negotiator David Frost made a speech in Brussels, where he called for a Canada style free-trade agreement type relationship.

Under that Canada agreement, import tariffs on most goods have been eliminated, though there will still be customs and VAT checks, but that is the least of the negotiating team’s problems right now.

Bear in mind that Boris Johnson’s own deadline for the negotiations is the 31st of December this year. He says that if no deal is reached by then, the UK will trade with the EU on WTO terms.

So with that in mind, here is what happened with Canada. It’s formally known as CETA, which stands for the Comprehensive Economic and Trade Agreement. The framework for talks was agreed in March 2004. A study assessing the costs and benefits was released in October 2008. Negotiations were officially announced on the sixth of May 2009. An agreement in principal was signed four years later on the 18th of October 2013, and negotiations were concluded on the first of August 2014, with the EU Parliament approving the agreement on the 15th of February 2017, and after that, it required ratification from a total of 38 legislative bodies across the EU.

We’re still a very long way from all of that being done, and the vast majority of these legislative bodies have not yet passed the agreement. Just yesterday, the Dutch lower house just about gave its consent in a very tight vote. There’s no guarantee that the upper house will still do so, that remains to be seen. And the French lower house ratified it on the 23rd of July last year, whilst the upper house has not yet done so.

With all that in mind, the process that began in 2004 and has not ended yet, does David Frost and the rest of Boris Johnson’s negotiating team really think we can get a Canada style free trade agreement ratified by December this year?

Unless the EU changes its own procedures, it’s a complete non-starter. Does Mr Frost think that it’s a case of picking the Canada style agreement off the shelf and tipexing the word Canada out, and replacing it with the words UK? In the real world, it’s not going to be anything like as simple as that.

Meanwhile the EU’s Chief Brexit negotiator Michel Barnier has made it clear that the UK cannot have the same deal as Canada because of its geographic and economic proximity to the EU, as the reality is that the UK and the EU would become economic competitors as well as partners.

© AFP 2020 / Philippe Huguen
Boris Johnson Unveils Post-Brexit Scheme to Root Out Low-Skilled Migration to UK
The EU has also said that it wants a common set of rules on worker’s rights, environmental regulations, and state aid, including subsidies for business, and the EU has also said that it will refuse to give British companies tariff-free access to the single market if British companies have the ability to undercut rivals based in the EU.

David Frost said in his speech last week that the freedom to diverge was the whole point of Brexit, and he insists that the UK will have high standards, but they won’t be the EU’s standards, and for the EU that does not appear to be good enough.

That is the argument that will be one of the main battles in the months ahead.

Sputnik: Could Boris Johnson cave in and accept EU regulations for the sake of avoiding a reversion to WTO rules?

Marcus Stead: Mr Frost also said that the UK needs to have the ability to set laws that suit us, and the European Court of Justice must not have any jurisdiction in the UK, and that the UK will set out more details next week on the stance, and how he feels the relationship should be.

One of Boris Johnson’s main character flaws is that he is not a man known for his attention to detail, or for policy depth. The jury is still out as to whether Mr Frost and his team have the necessary skillset to make up for that, in what will be very tough negotiations with the EU in the months ahead, and the clock is ticking.