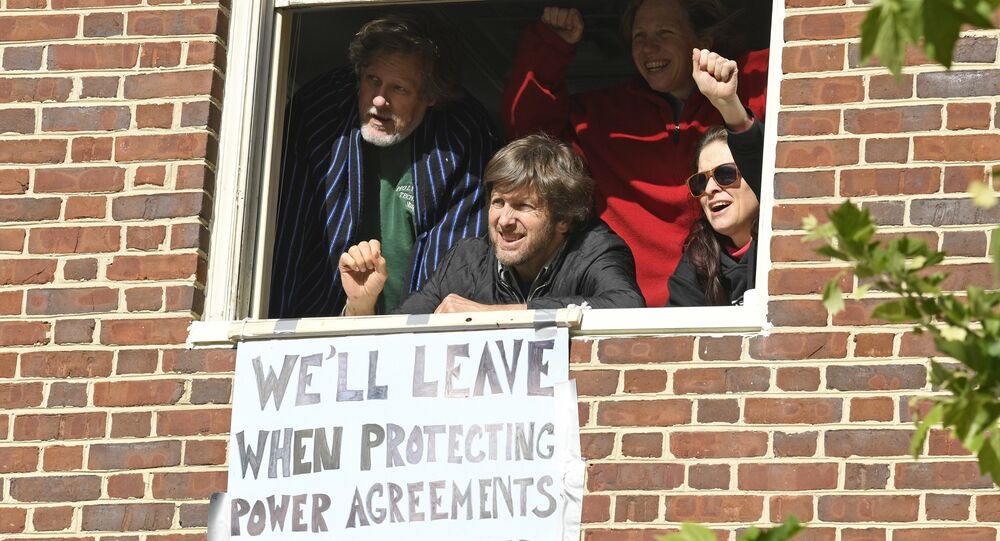 The trial of four Embassy Protection Collective members, who defended the Venezuelan Embassy in Washington, DC, in May 2019 from seizure by the Venezuelan opposition supporting the US-backed coup attempt against Venezuelan President Nicolás Maduro, ended with a deadlocked jury Friday.

However, even if the charges against the Embassy Protection Collective members are dropped, there is a need to disseminate truthful information on Venezuela and other examples of US interventionist policies to a broader audience, David Paul, one of the four Collective members who faced trial, told Radio Sputnik Tuesday.

“It’s not over yet. But the important part of it ended. It gave us a lot of information about where we stand and what we face,” Paul told Loud & Clear Host John Kiriakou.

“In a general sense, the whole trial is sort of an unreal fantasy event, because we go into the trial … we swear to tell the whole truth and nothing but the truth, but … in fact, there’s a lot of truth we can’t say. There’s so much we can’t say, and our whole point of being in the embassy was to try to tell the truth, to give voice to the truth about what is going on in Venezuela, to counter the massive disinformation that the mainstream media has shown to [viewers] for many years,” Paul explained.

“It’s a challenge to try to say as much as we can without stepping on the rules that the judge and the court laid out to limit giving a context to why we were in the embassy, and that’s a challenge if we get retried. We did see through this first trial what the government’s arguments to the jury are, and they saw ours. So, if there is another trial, we might have to make some adjustments,” he noted.

“For example, we were told we cannot say that Nicolás Maduro is the elected president of Venezuela - we can only say we have a subjective belief that the Maduro government gave us permission to be in the embassy,” Paul pointed out. According to the US government, the Maduro government is illegitimate and the Washington, DC, embassy should be under the authority of envoys representing Juan Guaido, whose claim on Maduro’s office is backed by the Trump administration.

The 37-day defense of the Venezeulan Embassy by the Embassy Protection Collective started on April 10 and ended on May 16, when US Secret Service agents forced their way into the building in a SWAT-style raid and arrested the four remaining activists: Paul, along with Kevin Zeese, Adrienne Pine and Margaret Flowers. They were subsequently charged with interfering with certain federal protective functions.

On Friday, the jury declared that they were deadlocked, and District of Columbia District Court Judge Beryl A. Howell ruled a mistrial.

“They [the prosecution] are going to talk to their superiors in the State Department and see how they want to move forward. On February 28, the two sides come together in court, and the government will tell us if they want to go forward with another trial or [if] they [want to] drop the charges. It’s one of those two choices, and we have nothing to do with it at this point. And once we hear from them on the 28th, we will know what we are facing,” Paul explained.

During the Embassy Protection Collective’s defense of the Venezuelan Embassy, their supporters were frequently assaulted by right-wing opponents of the United Socialist Party of Venezuela (PSUV).

“It was quite a scene with this quite loud and violent mob surrounding the embassy, assaulting our supporters, blocking food … there’s so much disinformation that the surrounding community didn’t know what was going on and saw it as an irritation … I was still frustrated … how little news about this was in the general population. I even have many libreral/progressive friends … who didn’t even know anything about it, even after we were arrested,” Paul said.

“We have to go beyond the sort of, this small circle of progressive supporters to get to the general population so that when a jury comes in - not just in our case, any case - they aren’t in the dark,” he argued.

“We need to be able to convert our beliefs, our political beliefs into words that aren’t such buzzwords that turn people off … I also think, right from the beginning, in any kind of action or event, have more information that is readily available like flyers or pamphlets, right from the beginning, that people can see on the streets instead of banners and chants … and more press conferences and more [activism and information dissemination] on social media,” Paul added.

Venezuela Intercepts Plane With Over 1,000 Pounds of Cocaine - Interior Ministry