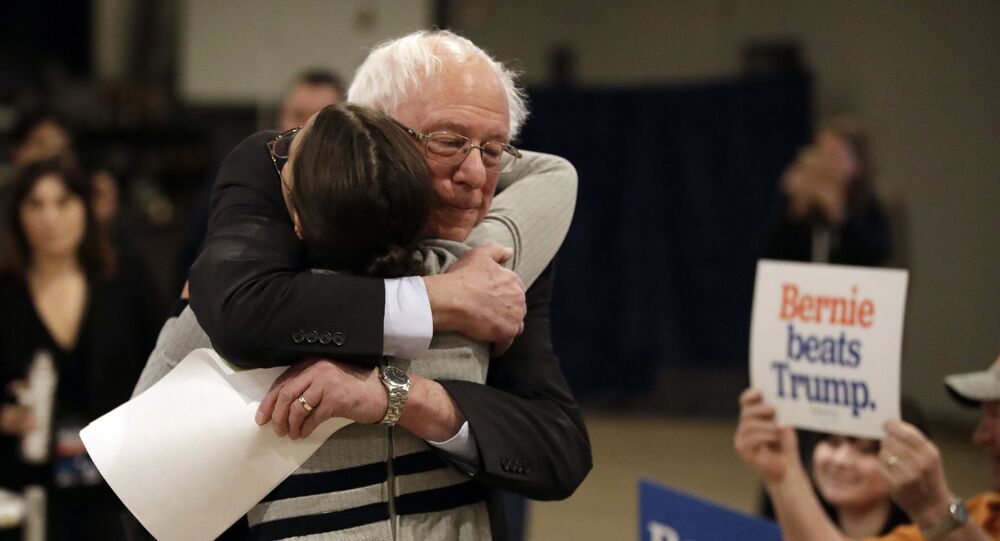 Professor Vladimir Golstein reveals why Bernie Sanders is the only Democratic candidate who has a chance of beating the president.

Donald Trump's 5 February acquittal by the Senate has given the green light to the president's re-election bid. According to BetOnline.ag, Trump's chances in the 2020 election are good, while Democratic presidential candidate Bernie Sanders is the most likely candidate from the Democratic camp after scoring a victory in the New Hampshire primary on 11 February.

Vladimir Golstein, associate professor of Slavic studies at Rhode Island-based Brown University, says that the Democrats failed to take the steam out of the Trump re-election bid and explains why Bernie Sanders is the president's only worthy adversary.

Vladimir Golstein: The impeachment saga testifies first and foremost to the failure of Democrats to present a strong viable program to defeat Trump this November. Nancy Pelosi and the DNC leadership, having evaluated the field, and being not terribly impressed with the quality of candidates, decided to embark on impeachment in the hope of tarnishing Trump and weakening his standing and reputation.

I am sure, that in the eyes of their supporters, Democrats have achieved their goals. Those who didn’t like Trump, ended up, disliking him more. But both Trump supporters and independents felt embarrassed by the proceedings.

The country faces an endless amount of serious challenges, from the economy and failures in the social sphere, to relations with China and Russia, and climate challenges. Focusing on Trump and his complex relationship with Ukraine and its leadership has confused and irritated people. The parade of experts, who instead of showing their expertise and objective evaluation – got engaged in partisan politics hardly helped. Trump emerged from the hearing more confident, with higher approval ratings.

Sputnik: How did the impeachment process and subsequent acquittal affect Trump's positions? What do you make of reports of an upcoming reshuffle in the White House?

Vladimir Golstein: Trump is known to value loyalty very highly. I am sure he’ll do all within his power, to free his cabinet from those whom he no longer trusts. I don’t think, however, that he’ll be engaged in some sort of personal vendetta. He feels victorious, he has a serious campaign coming up, so it is highly unlikely that he’ll decide to do anything that would give Democrats another opportunity to attack and criticise him.

DRAIN THE SWAMP! We want bad people out of our government!

​Sputnik: What are the Dems' chances in the 2020 presidential race? Who is likely to become Trump's major rival in the latest phase of the contest?

Vladimir Golstein: I am strongly convinced that the only person that can provide a challenge to President Trump is Senator Bernie Sanders. And recent polls confirm it, even though we know that polls can be misleading. I don’t think Pete Buttigieg has enough of the appeal both within Democratic party and most certainly outside it, where he is perceived as another version of smooth talking Barack Obama.

We are building the multiracial, multigenerational coalition to defeat Trump. pic.twitter.com/hzNA59gw2X

​Like in many recent elections, the fate of the winner would be decided by people who are not partisans of either party. We are talking about independents, about so called, "Reagan Democrats", that is, working low-middle voters who might get disappointed in Democrats for no longer presenting their interests, and who would therefore vote for Trump.
Another group that can contribute to the victory are the people who usually don’t vote, but who could get galvanised by one of the candidates.

In both cases, it is clear that only Senator Sanders can achieve that. His economic program, that seems to focus on elevating the plight of those who need better pay, better access to affordable medicine, and education, can provide the necessary appeal. I don’t think that Sanders pluses would overcome his drawbacks in the eyes of these "Reagan Democrats" and therefore secure his victory in November, but at least, he has a chance. All other candidates would be perceived as aloof, and interested in some obscure, irrelevant issues, to which majority of population cannot really relate.

Sputnik: What will happen next after the impeachment process? Could we expect a counter-attack against Democrats on the part of Team Trump? Will the Republicans use John Durham's investigation into the "spygate" story to deal a heavy blow to the Democratic camp and its allies in the Intelligence Community? Or is it more plausible that the two parties will strike a tacit agreement?

Vladimir Golstein: I suspect that Trump would not pursue the issue much further, especially in the light of spectacular failure of Joe Biden’s campaign. Biden is no longer a threat. So Trump does not really need to investigate all the unsavory activity of Vice President Biden, of his son, Hunter, and of many other Democrats, heavily involved in domestic, and frequently corrupt, affairs of Ukraine.

Democrat Rep. Adam Schiff: Joe Biden’s son on Burisma’s board “at a minimum an appearance of a conflict.”

​Democrats, on the other hand, will do their best to keep on digging dirt on President Trump. They know that that’s the only way to get him. Especially since economy seems to be performing well, unemployment is low, and Trump enjoys popularity among a big segment of population.

Many independent voters do want Trump to investigate Democratic camp and its unhealthy relations with the Intelligence Community, which has shown itself highly biased and partisan. But I don’t see it in the cards. Trump is much more interested in winning the election than in anything else. How will he behave, what actions will he undertake, if he wins, is a very interesting question, which no one, including Trump, can answer right now.