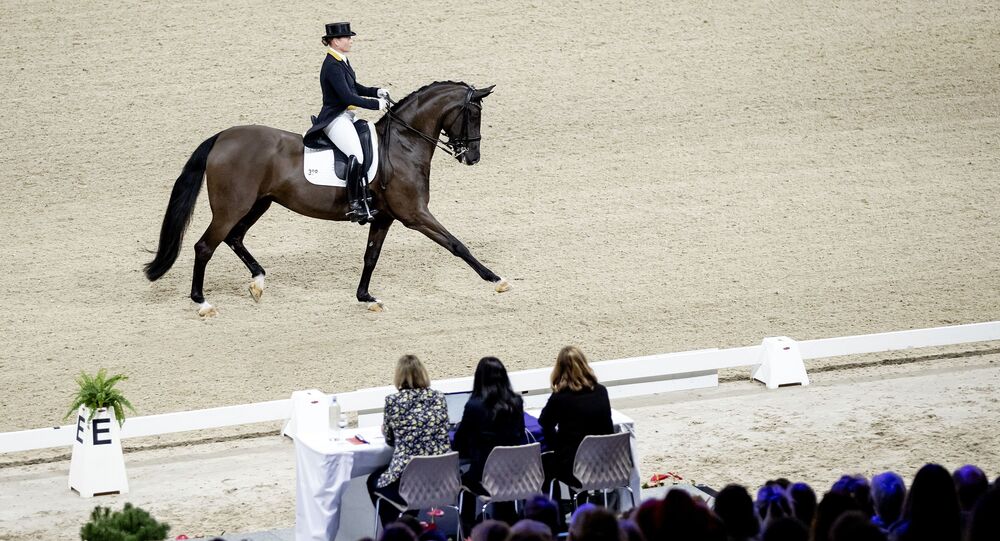 The January equestrian competitions in Amsterdam have prompted fierce criticism from Dutch animal welfare activists. Dutch equestrian sport legend Albert Voorn and longtime horse trainer and clinician Hector Carmona have explained what's behind the sport's degeneration and how the problem should be addressed.

Between 23 and 26 January, the International Federation for Equestrian Sports' (FEI) World Cups in Jumping and Dressage took place in Amsterdam. However, while the event organisers are lauding it as "fantastic", honouring winners Isabell Werth with Weihegold Old and Marc Houtzager with Sterrehof’s Dante, proponents of classical horse training and animal rights activists continue to express serious concerns about horse health issues at the prestigious equestrian competitions.

Dier & Recht (Law & Justice for Animals), a Dutch animal rights group, says that there were structural abuses at all 19sections of the recent Jumping Amsterdam competition.

​"Jumping Amsterdam says it is an 'animal friendly' event. How happy do you think this horse looks? We are not against equestrian sports. We're against structural horse suffering and for alternatives that are truly animal-friendly."

According to the group, the horses suffered from the use of coercive means such as a bit, spurs and whip with signs of pain and stress being clearly visible.

"There is nothing sporty about driving a horse to the limit with pain stimuli", stated Sarah Pesie, an animal welfare scientist at Dier & Recht following the competition, criticising its organisers for their "inadequate and ineffective" supervision of animal well-being.

So, is there any team that could be called the strongest in terms of technique and their compassionate attitude towards their horses? "There's none", says Albert Voorn, a Dutch equestrian and Olympic medallist and one of the world's leading trainers, who was named "a legend" by Horse Magazine.

According to him, people are taking part in equestrian competitions largely to feed their ego, unfortunately, at the expense of a horse.

"We are dealing with an animal that has an unbelievably high acceptance level," Voorn highlights. "Whatever training one is using to win gold medals at the Olympic Games, if one wins the gold despite one's methods not complying with FEI rules, it would be hard to convince him/her that he/she did something wrong".

The trainer elaborates that "people who do sports with horses don't do it out of the love for the horse".

"If you really love horses you don't do sports with them," the Olympic medallist says. "So, if you are in a sport involving the animal you must show maximum respect for it, i.e. approach a horse with knowledge of what it is physically capable of doing and what it's not and how its organism functions. This respect will help you get the best out of that particular animal."

Horse Abuse: Why Are So Few Sounding the Alarm

It is not the first time the FEI and national clubs have been lambasted due to the mistreatment of horses. In 2018, WDR's Quarks carried out an independent investigation into the 2018 CHIO (Concours Hippique International Officiel) Aachen festival, exposing that most of the competing horses were subjected to "Rollkur", i.e. hyperflexion of the horse's neck, banned by the International Federation of Equestrian Sports (FEI) in 2010.

However, Quarks' call for action seemingly fell on deaf ears, as non-horse-friendly riding was nailed again by independent observers during the 2019 CHIO Aachen contest.

Hector Carmona Jr, a horse trainer and clinician who was a member of the International Federation for Equestrian Sports (FEI) up until the mid-1990s as a competitor, believes that there is a great deal of corruption within the ranks of the international and nation equestrian federations.

Citing the cases of non-friendly horse riding in Aachen and Amsterdam he points out that just a few journalists addressed the issue while the established equine media remained silent. According to the clinician, "it's all about the money" which have eclipsed the idea of horse's welfare.

"This is full-blown cover-up. Which is my opinion is corruption, a cover-up by all of the equine media, all of the big ones, all of them. We just had the show in Amsterdam; there were only two media outlets that wrote about what took place," opines Carmona, hailing Dier & Recht's for ringing the alarm.

​"The horse sector keeps the blinkers on. Shocking! Horse lovers in particular should recognise the pain signals of this animal."

'FEI Rule Book Has Been Thrown in a Dustbin'

Commenting on the FEI's "hush-hush" approach towards brutal riding practices, Voorn suggests that judges and stewards usually refrain from lambasting famous riders for violating FEI rules out of fear of losing their jobs and the perks of their positions, such as fine dining and luxury hotels.

The Olympic medallist recollects that in 2005-2007 he raised the Rollkur issue while criticising a renowned Dutch dressage rider known for the use of the controversial training method.

"I told her: 'I'm very frustrated because you're an example for young people in sports'," he notes. "The end result of the whole discussion was that in the Netherlands all the doors were closed for Albert Voorn. Nobody wanted to talk to me because I had attacked 'the queen of dressage' of the Netherlands".

Eventually, the FEI outlawed Rollkur in 2010 but permitted the so-called "Low, Deep and Round" (LDR) techniqueb which does not differ much from Rollkur, as classical dressage trainers say.

Apart from this, there's an educational problem among those joining the sport: according to Voorn, many of them have no idea of how a horse is "functioning".

"This is a sport, where a rider with this very little knowledge still can be very competitive if he/she has money available to have success", he notes.

For his part, Carmona argues that the problem is worse than that: the equestrian education does exist, he says, but "it has been thrown in the dust bin, along with the FEI Rule Book".

"What has happened is that we've lost one or possibly two generations that are totally unaware of [dressage] history. And so with them this re-education process will be kicked off once the FEI riding school is reformed", he opines.

To become a real professional, a rider should treat his/her horse with respect and finally open up and read the FEI Rule Book, the longtime horse trainers underscore.