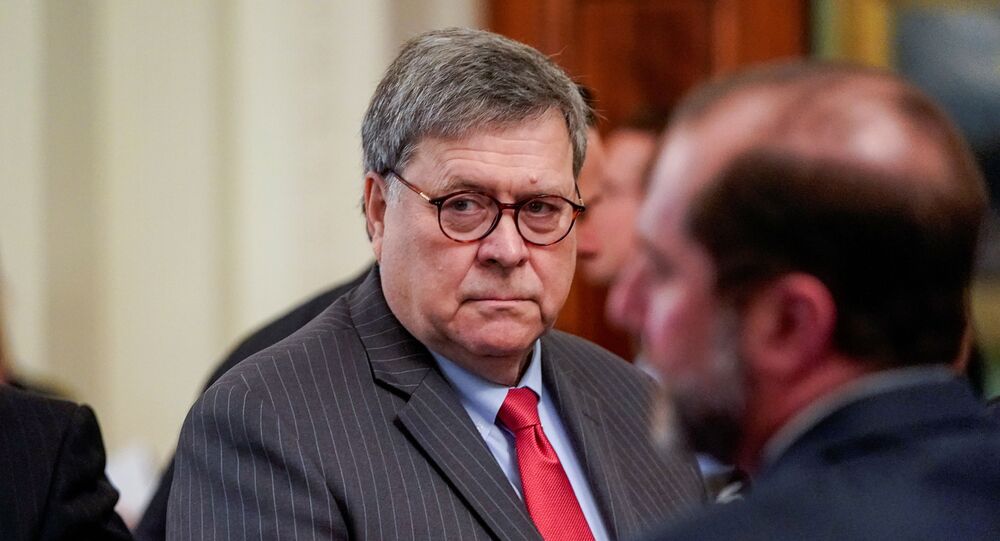 As Democrats seek Attorney General Bill Barr’s removal following an about-face on Trump ally Roger Stone’s sentencing recommendation, one expert tells Sputnik the pushback may have more to do with the pending release of the Justice Department’s so-called “anti-Mueller report” than anything else.

Daniel Lazare, a journalist and author of “The Frozen Republic,” “The Velvet Coup” and “America's Undeclared War,” joined Radio Sputnik’s Loud and Clear on Wednesday to provide his thoughts on why the Democrats’ reaction to the DoJ’s Stone sentencing recommendation memo is about more than just the prison time awaiting a self-proclaimed “dirty trickster.”

Lazare told hosts Brian Becker and John Kiriakou that he believes Barr is “at odds with the ranks beneath him,” because “the bulk of the DoJ bureaucracy” is still in a “pro-Mueller,” Russiagate mindset.

“I think the DoJ and the local US attorneys went wild in this case and carried it way too far,” he argued, speaking of what he called a “draconian sentence” for Stone. At the same time, Lazare expressed that he does believe that Stone is a “dirty trickster” who needed to be “slapped down,” but not given a possible sentence of seven to nine years behind bars.

Being that Russiagate and the investigation by special counsel Robert Mueller failed to result in US President Donald Trump’s removal from office, “obviously a house cleaning is taking place in the DoJ,” Lazare contended.

All four prosecutors withdrew from Stone’s case shortly after DoJ officials told the media they were “shocked” by the sentencing recommendation prosecutors handed down.

Jonathan Kravis, who served as an assistant US attorney, and Special Assistant US Attorney Aaron S.J. Zelinsky took their withdrawals a step further: Kravis declared in a Tuesday court filing that he has withdrawn from his position at the DoJ and “therefore no longer represents the government in this matter,” and Zelinsky said in his withdrawal notice that he had “resigned effective immediately” from his role in the Washington, DC, US Attorney’s Office.

A supplemental and amended sentencing memorandum was later released by the DoJ on Tuesday, noting that the prior filing “does not accurately reflect the Department of Justice's position on what would be a reasonable sentence in this matter.”

Barr and the DoJ’s unusual intervention in the matter and the prosecutors’ resignations sparked outrage from a number of individuals, such as House Speaker Nancy Pelosi (D-CA), who called on the DoJ to be investigated. Senator and Democratic presidential candidate Elizabeth Warren (D-MA) argued that the attorney general should resign or face impeachment from Congress.

Congress must act immediately to rein in our lawless Attorney General. Barr should resign or face impeachment. And Congress should use spending power to defund the AG’s authority to interfere with anything that affects Trump, his friends, or his elections.

“The Durham investigation, which is a criminal investigation, will be, essentially, the anti-Mueller report,” Lazare argued. “When someone like Elizabeth Warren calls for Bill Barr to resign, what she’s really saying is, ‘Stop Durham from issuing that report. Let’s protect the anti-Trump factions in the DoJ, because John Durham, potentially, could blow them out of the water.”

US Attorney John Durham was assigned last spring by Barr to explore the origins of the Russiagate probe, especially why the FBI had spied on Trump election campaign officials if, as the Mueller report concluded, there was no proof of their collusion with the Russian government.

While it's unclear when information pertaining to Durham’s investigation will drop, House Minority Whip Steve Scalise (R-LA) recently argued that the “dirty cops” undermining Trump’s agenda may soon be dealt with.

“I have seen some classified information I can't go into — but, I can say this: Hopefully, Durham names names. I think the attorney general is waiting to see what comes out of that. And then, hopefully, they go after those people and put them in jail,” he told Fox News’ Sean Hannity on February 7, as reported by the Washington Examiner.

‘Notable Progress’ Made by US, Taliban in ‘Reduction of Violence’ Agreement