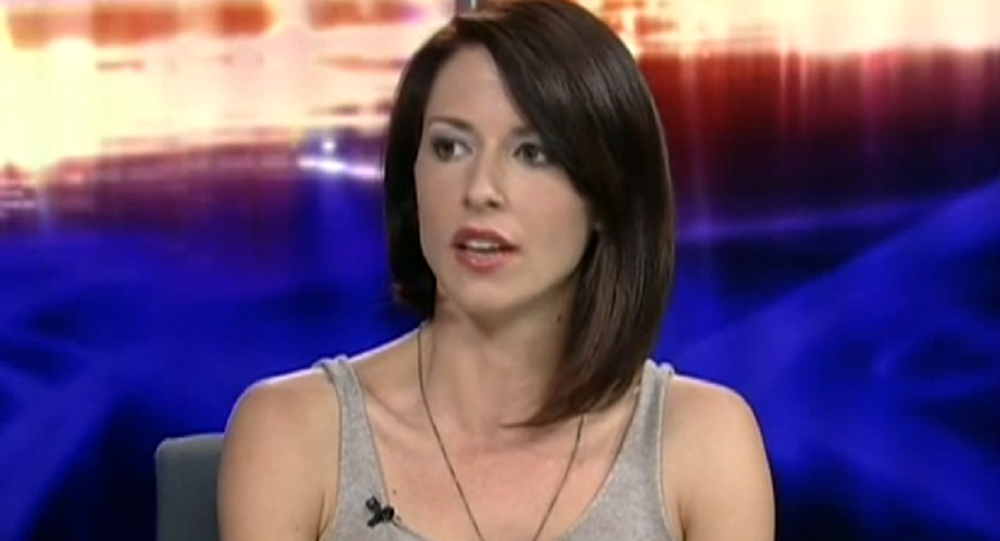 Abby Martin, host of “The Empire Files,” joined Radio Sputnik Tuesday to discuss how her talk at an upcoming conference at Georgia Southern University was canceled after she refused to sign a contractual pledge to not support the Boycott, Divestment and Sanctions (BDS) movement. Now she’s filing a lawsuit in defense of her First Amendment rights.

Martin told Sputnik that a lawsuit was filed against Georgia Southern University Monday morning in the state of Georgia. The two organizations helping her with the case, the Council on American-Islamic Relations (CAIR) and the Partnership for Civil Justice Fund, anticipate “that it could be a very clear-cut case … I'm hoping that will be a very quick, clear-cut rejection, an overhaul of the law in the state of Georgia,” she said.

“I’m really excited to be working with CAIR and also the Partnership for Civil Justice Fund, an amazing attorney’s office that is central to DC that has challenged many free speech violations in DC and beyond. And I’m working in conjunction with these two organizations, and I’m very thrilled to be working with them, because I really believe in their work,” Martin added.

Martin said she decided to take legal action for two reasons. “One, this is central to my professional and personal life. This is something that is a central tenet to my moral convictions and beliefs,” Martin told Loud & Clear host Brian Becker, referring to her advocacy for Palestinian rights. She noted that after refusing to sign the pledge, other scheduled speakers supported her position, and the talk was canceled.

​“However, this conference that was scheduled was actually not about Palestine or my criticism of Israel at all. It was simply about media literacy: speaking as a journalist on the subject of media. So, not only was this a complete violation of my right to have my personal convictions - akin to deeply religious beliefs that other people have that are protected constitutional rights - but also just my right to engage in peaceful political protest, and that is the right to boycott,” Martin told Sputnik.

​“This is something fundamental going back decades and has very long-standing roots in the political activism movement in this country, just like the civil rights movement. So, especially being in Georgia and being told by the state of Georgia that I cannot speak at a publicly funded institution about any subject matter, not just the subject of Palestine, if I don’t contractually pledge to violate and forfeit my constitutional rights was just an abhorrent notion. And I know that I need to challenge this. I think a lot of people - thousands of independent contractors - are forfeiting their constitutional rights all the time without realizing that they are signing them away with these independent contractor clauses,” she explained.

The BDS campaign is a Palestinian-led movement fighting for the freedom, justice and equality of Palestinians by putting nonviolent pressure on Israel through the boycott of Israeli-made goods and academic and cultural events, pressuring companies to divest from Israel and calling for international sanctions on Israel to force the country to comply with international law and end the occupation of Arab lands.

However, a growing movement led by the Israeli government has pushed back, claiming that BDS is anti-semitic and advocating for it to be barred from university campuses on racial discrimination grounds.

Martin noted that according to the terms of the pledge she was asked to sign, “you cannot boycott or advocate the boycott of Israel - not just in the talk that you are going to give or the work you are going to do in said institution or in said state. It’s just that at any point in your life, you cannot engage in the political boycott or the advocacy of the political boycott of the state of Israel, which is absolutely absurd. How could I have complied with this?”

“I just released a film called ‘Gaza Fights for Freedom’ that advocates [for] the BDS movement. I am involved in many movements that advocate for BDS, for Palestinian rights. Was I supposed to remove all these video reports from my company’s website, destroy and delete all copies of the film? It was an absolutely outrageous thing to ask of someone: ‘You cannot engage in this political activity that is of course protected in the First Amendment,’” Martin explained, which enshrines the right to free speech in the US Constitution.

According to an April 2019 report by the Human Rights Watch (HRW), 27 US states have adopted anti-boycott laws to punish businesses, organizations or people who support the BDS movement.

“States with anti-boycott laws are effectively telling companies that if you do the right thing and disentangle yourselves from settlement abuses, you can’t do business with us. States should encourage, not sanction, companies that avoid contributing to rights abuses,” Andrea Prasow, deputy US advocacy director at Human Rights Watch, said in a press release. The US Senate in January 2019 also passed a bill endorsing state anti-boycott laws, though the bill has yet to receive a vote in the House of Representatives.

Several anti-BDS laws have been challenged at the local level, Martin noted.

“A speech pathologist in Texas was able to challenge this law. CAIR has also challenged these laws successfully in several instances … They’ve [lawmakers passing anti-BDS laws] been able to make the law more malleable to preserve this egregious violation of the Constitution and keep it intact, but there’s been different outcomes across the country. I am confident that any judge with any sort of understanding of the Constitution of the US - which I would hope any judge would have - would strike down this blatant violation of our First Amendment rights. This is kind of a two-pronged law that violates ... the political right to boycott and also the right to speak on these issues,” Martin explained.