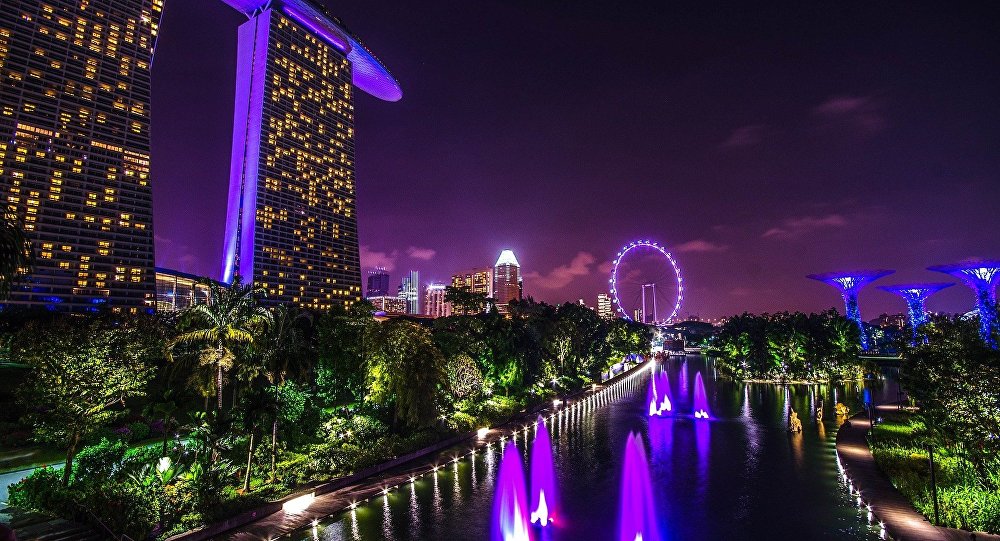 While British Conservatives have long lauded the Singapore model as a viable post-Brexit scenario for Britain, the concept has its pros and cons, say European academics, explaining why the EU is expressing anxiety about the UK's alleged plan to create a "Singapore-on-Thames".

Prime Minister Boris Johnson is pursuing a hard line in trade negotiations with the EU prompting concerns by the bloc that Britons may adopt a low-tax and low-regulation model, dubbed by UK conservatives "Singapore-on-Thames", which could pose an economic challenge to the union with its high standards on goods, workers’ rights, tax, and the environment.

Pros and Cons of the Singapore Scenario for UK

A "Singapore-on-Thames" concept has been circulated by British Conservative lawmakers since 2016. In his 2017 op-ed for The Telegraph, Owen Paterson, a Cameron cabinet minister, hailed the Singapore model for its "low-tax, low-spend, low-regulation" policies. On 30 December 2018, then Foreign Secretary Jeremy Hunt picked Singapore as an example while outlining his vision of "post-Brexit prosperity".

For his part, Singaporean Prime Minister Lee Hsien Loong challenged the idea in his November 2018 interview with Bloomberg, saying that one cannot "take one society’s solution and just plonk it on a different society". The prime minister drew attention to the fact that UK government spending, state pensions, and national health account for 40 to 45 percent of the gross domestic product (GDP) while those of Singapore account for just 16-17 percent of GDP.

Charles Woolfson, professor emeritus of labour studies at the Institute for Research on Migration, Ethnicity and Society, Linköping University, Sweden, explains that British Conservatives regard the Singapore economic model as "a society in which unrestrained free enterprise, until recently at least, has seemed to offer a recipe for rapid economic growth".

"For the current Conservative government, led by ardent free-marketeers, a ‘Singapore scenario’ or a ‘UK-apore’ would be achieved by an ultra-business-friendly environment with low or zero corporation tax, low wages, weak trade unions and vestigial welfare provisions", he elaborates.

According to Woolfson, the EU's anxiety may not be unjustified since the Boris Johnson government is seemingly seeking "to drive down living standards and wages in order to try to boost the post-Brexit competitiveness of the British economy". He warns that "the Singapore scenario represents a bleak future for ordinary working people".

Christopher Bovis, a professor of international business law at the University of Hull, describes the Singapore model as "the epitome of free trade with highly regulated market and labour access".

"Most international partners such as the WTO and the EU view Singapore as a model of South East Asia economies which balances free trade with regulation of production factors", he remarks.

So, would the Singapore model work in the UK? According to the academic, this is highly unlikely.

"Singapore is a small country whereas Britain is a large country with many devolved administrations such as Scotland, Wales, and Northern Ireland", Bovis points out.

It is also a misconception that after the UK's exit from the EU, it will abruptly drop to attract investments, he asserts.

"First, the UK will maintain acquired standards for the environment, labour, governance and regulation, as a hallmark for attracting investment and offering certainty and security in international transactions. Second, Singapore has also very high standards and regulatory frameworks and its competitive environment is attributed to the value-based offerings rather than a cut-throat economic system", the professor observes.

Lawk Ghafuri, a London-based political analyst who specialises in international business and economy, argues that a "Singapore on Thames" is "not possible for now" since the UK is not capable of competing with the EU: "The UK and the European Union are both in need of each other now, and to be more specific, UK is very in need of the EU", he underscores.

Antonio Moreno, professor of economics and finance at the University of Navarra, Spain, holds a different stance. He believes that there is a real possibility that Britain will create a kind of "Singapore on Thames" after Brexit.

"At the end of the day, the UK has a higher preference for low government, less taxes, and less regulation than continental Europe and that may imply higher competition", Moreno notes. "But there is a danger for the UK too if they take this route: It may bring about less social cohesion and economic inequalities in the UK".

According to the observers, the UK and EU need to find an optimal formula of co-existence and enshrine it in its trade agreement. As The Guardian reported on 6 February, a leaked draft resolution from the European Parliament’s newly established EU-UK coordination group presented an opposite view to what the Conservatives lauded as the "Singapore on Thames" solution. The document obligates the UK to match EU standards on workers’ rights, environmental protection, and state aid.

"These standards will also be demanded by many citizens in the UK", he believes.

Christopher Bovis suggests that UK-EU relations may eventually take the form of a bilateral agreement treaty "which could reflect the parameters of two recognised systems":

·         a bespoke trade model ranging between the Norway-EFTA model and the CETA-Canada European Trade Agreement.

"It is anticipated that the UK will have in place a trade agreement to continue accessing the EU markets, which represent at least half of its trade", he says.

For his part, Woolfson foresees that the UK will face a serious dilemma: on the one hand, the Conservative government promises that post-Brexit Britain will be free to strike its own trade deals with partners around the world, notably the US. On the other hand, it is going to be "a very tough call", according to the professor who underlines that "the EU will therefore be only one, albeit important future market for the UK".

He highlights that when tariff-free trade and a single customs union disappear in December 2020, everything will depend on what kind of trade agreement if any the EU and UK conclude.

"Really, it is anybody’s guess as to the outcome of the negotiations with the EU but a ‘hard Brexit’ cannot be ruled out", Woolfson says. "My money would be on ‘no deal’ and a reversion to the World Trade Organisation rules. This chimes most closely with the ideological vision of a ‘Singapore scenario’".