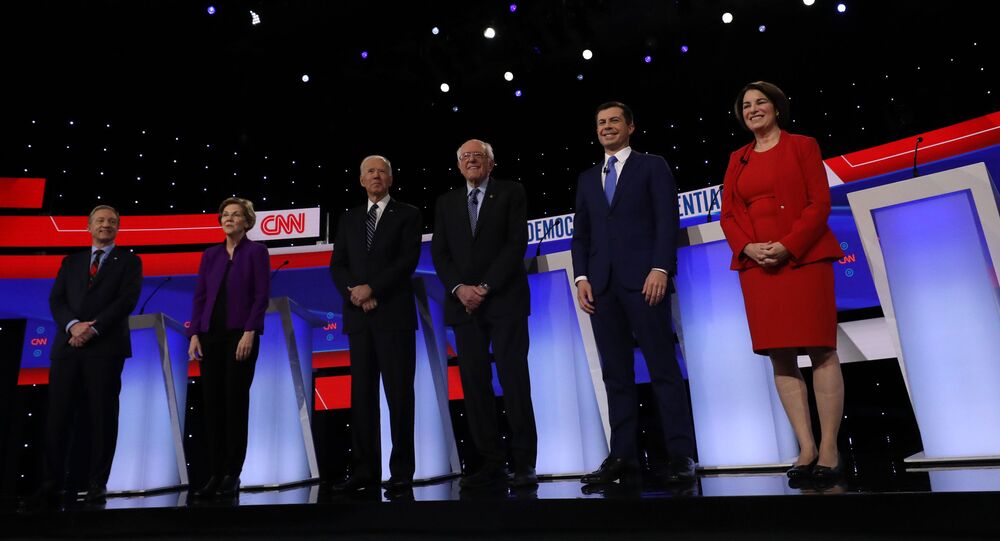 Pete Buttigieg is rising as a consensus pick for moderate Democrats, while Joe Biden is losing steam, say US observers, explaining why Hillary Clinton and Barack Obama campaign donors have thrown their weight behind the young Democratic dark horse.

Pete Buttigieg, a 38-year-old ex-mayor of South Bend, Indiana, and the first openly gay presidential candidate, has won the Iowa caucuses in a tight contest with Democratic heavyweight Bernie Sanders.

Out of the Blue: Who is Pete Buttigieg?

Though his victory was overshadowed by a scandal over chaotic vote tallying caused by a new app used by caucus precinct chiefs the young politician has obviously stolen the show. For many Buttigieg's Iowa win came out of the blue given that the former mayor has neither experience for the presidential bid nor a solid political record.

Pete Buttigieg, the youngest presidential candidate running, was described by The New York Times as "a relatively obscure mayor of an Indiana city of just over 100,000 people". A graduate of Harvard and Oxford University, he is also known for serving as a Navy Reserve intelligence officer and working as a McKinsey consultant before performing duties as the 32nd mayor of South Bend between 2012 and 2020.

As Buttigieg tweeted ahead of taking the stage at a CNN Town Hall on Friday: "The first time I was here, few people knew me or how to pronounce my name. Now we've won the Iowa Caucuses and we’re just 5 days away from the New Hampshire Primary".

This president won't see it coming either. pic.twitter.com/LeBcaa7w3Q

​According to Paul Poast, Associate Professor in the Department of Political Science at the University of Chicago, the Iowa caucuses' results indicate that "experience is becoming less valued".

"Trump had no experience at all in 2016, let alone compared to his Republican rivals or [Hillary] Clinton", says the professor. "Obama had way less experience than Clinton or [John] McCain in 2008 or [Mitt] Romney in 2012. It’s much more about personality and charisma, especially since a key to winning elections is motivating members of your party to turn out to vote. Additionally, less national political experience – say as a senator – means less of a track record to be held against a candidate".

Characterising Buttigieg, Poast notes that the former mayor "has the ability to excite people" like his contenders Elizabeth Warren and Bernie Sanders. This is why "this is really a race between those three", the academic presumes, adding that Joe Biden "has too much 'history' that can be used against him".

Jim Jatras, ex-US diplomat and foreign policy adviser to the Senate GOP leadership, outlines yet another Buttigieg "selling point": "The fact that he is an open homosexual has a certain kind of appeal to the Democratic constituency in the same way that Barak Obama was the first black candidate, or somebody else, a woman candidate", he notes, adding that at the same time the politician's lack of experience counts against him.

There's yet another Buttigieg-related issue that is triggering a lively debate among those closely watching the 2020 race: while being a dark horse the former mayor has managed to win support from establishment moneybags such as Steve Elmendorf, who forked out over $100,000 for Hillary Clinton’s 2016 campaign, and Robert Pohlad who raised about $500,000 for Barack Obama in 2012, according to the documents obtained by CNBC in April 2019.

A few months later, Axios drew attention to the fact that Buttigieg had enlisted Michael Halle, a prominent Democratic strategist who orchestrated Hillary Clinton’s campaign in 2016. "His hire is the latest in a steady drumbeat of big names that Buttigieg has brought on", the media outlet pointed out.

Jess O'Connell, former DNC CEO, who played a senior role in Hillary's campaign during the 2008 presidential race, has also thrown her weight behind the former mayor joining his team last July.

Proud to share I’m joining the @PeteButtigieg campaign! I believe in his values and his vision for America. I believe in his character and his commitment to building a better future for all — no matter what you look like, where you come from, who you love, or how you pray. (1/5)

​Given Clinton's repeated hints that she has been encouraged to enter the 2020 race, one might wonder whether Buttigieg is laying the groundwork for Hillary's comeback. However, the observers refute the assumption.

"I think there is zero chance that Buttigeig would endorse Hillary Clinton for another presidential run", says Kyle C. Kopko, Ph.D., associate dean of institutional effectiveness, research, and planning at Elizabethtown College, stressing that "it’s not uncommon for candidates to use similar staff and consultants form election to election".

Jim Jatras echoes Kopko by saying that despite persistent rumours Hillary will try to get back into the race into "a deadlock convention", it's unlikely to happen this time.

"I don’t know if Buttigieg is a stalking horse as they say for Hillary Clinton or whether he is simply one of the contenders the establishment wants, that will basically take orders from Wall Street as the alternative to socialism", the ex-diplomat presumes.

According to the analysts it is far more plausible that the establishment wants to stop Bernie Sanders by sponsoring the young ex-South Bend mayor. Adding fuel to the fire of the Iowa caucuses' controversy the Boston Herald reported on 4 February that a mobile application blamed for the fiasco was created by a firm run by Gerard Niemira, a veteran staffer of Hillary Clinton’s 2016 presidential campaign, which evokes strong memories of the allegedly rigged DNC nomination process that left Bernie Sanders out in the cold four years ago.

"I don’t think it is necessary that they’re holding a place for Hillary or anybody else but they want somebody, anybody – that will not be Bernie Sanders", Jatras says. "Buttigieg is getting a lot of establishment support from party apparatus that is anxious to stop Bernie Sanders".

Daniel Kovalik, Adjunct Professor of Law at the University of Pittsburgh, shares a similar stance suggesting that Buttigieg's job is "to take thunder away" from Sanders and "clear the way for a more viable establishment candidate, such as billionaire Michael Bloomberg".

According to Kovalik, "it is apparent that the [Democratic] party has given up on Biden" and will do "anything, including losing to Trump, to keep Sanders out of office". 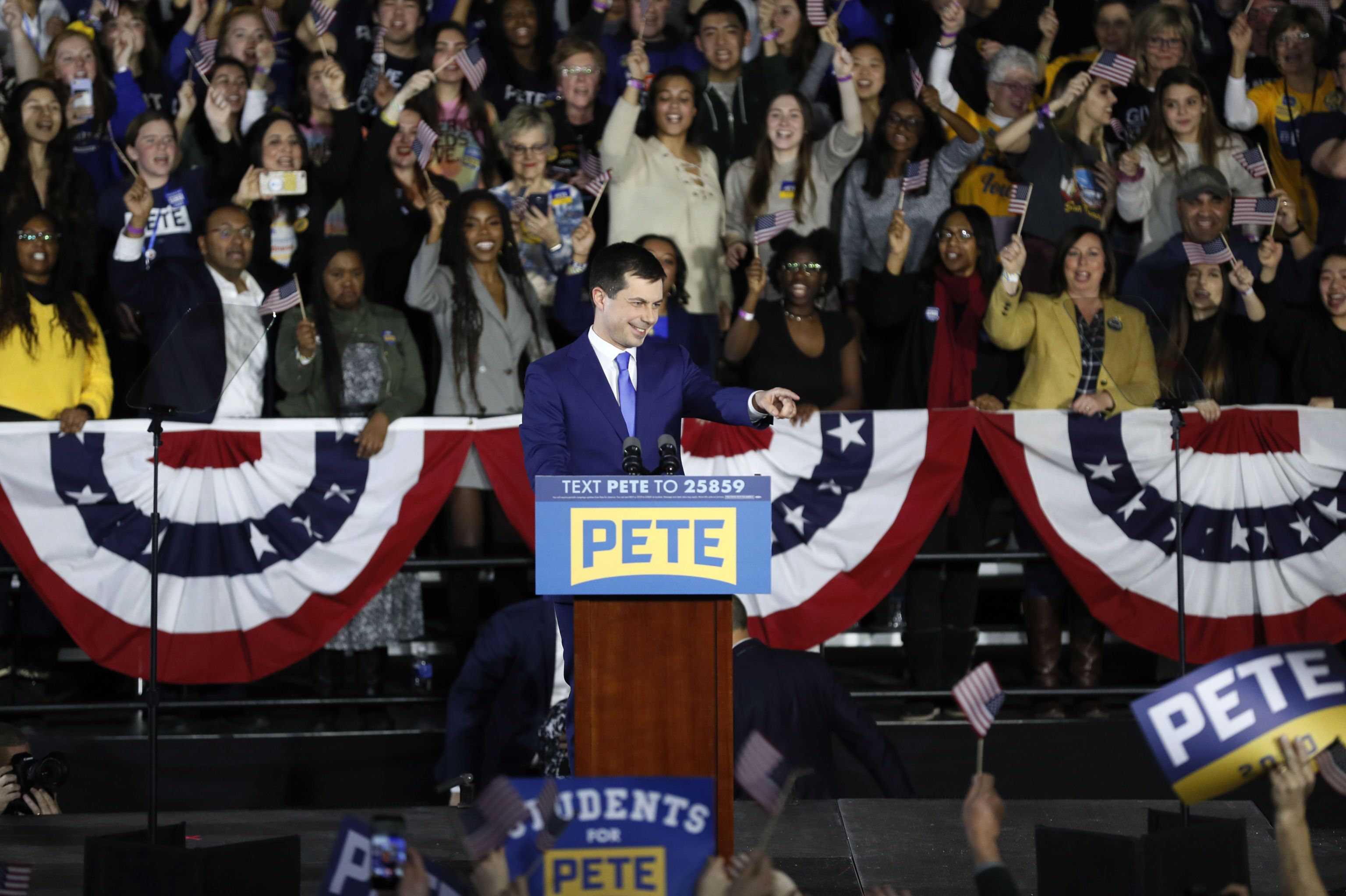 Iowa Win Not Enough to Open Door to Nomination

However, the Iowa victory may not get Buttigieg closer to the nomination, the observers believe.

According to him, most political observers expect Sanders to win in New Hampshire. "Then the questions is whether Buttigeig finishes second", Kopko continues. "If so, that will be a powerful win for his electoral changes – especially if Joe Biden finishes third or fourth in the field".

The academic does not rule out that Buttigeig may become "a consensus Democratic candidate". The former mayor has a good chance of being the Democratic nominee for president in case he outperforms Biden in early states prompting the latter to drop out. Then it is possible that Biden's supporters will shift to Buttigeig, he foresees.

In contrast, Jatras does not believe that the 38-year-old politician is likely to win the nomination: "He has a couple of weaknesses, as you mentioned – his lack of experience", he says. "But also, as you know African Americans are a primary constituency in the Democratic Party and he does not have very good African-American support".

On Sunday, the Democratic Party of Iowa published updated results of the 3 February caucus indicating that Buttigieg is still leading Sanders by about a two state delegate equivalent. For his part, the Democratic progressive candidate signalled that he would seek a “partial recanvass” of the results to ensure that the results were correct.

According to the former diplomat, New Hampshire and South Carolina will become a litmus test and apparent problem for Buttigeig's presidential nomination bid.

'Take Him Down on the Economy, Stupid': Democrats Hold First Post-Iowa Debate