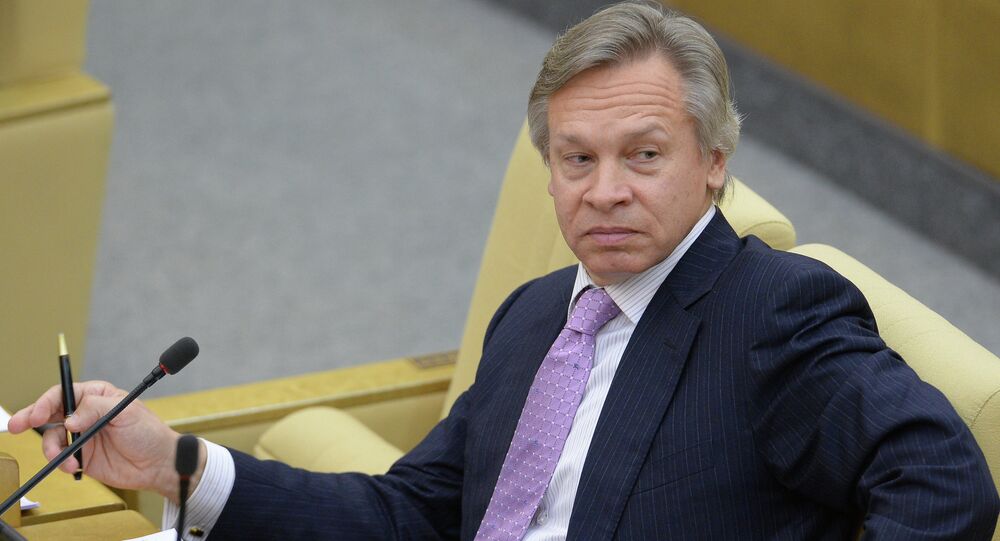 Russia has become locked in a dispute with Poland and the Baltic States over the origins of WWII after the European Parliament passed a resolution in September on the history of the conflict. The resolution claimed that the 1939 non-aggression treaty between the Soviet Union and Nazi Germany led to the start of the war.

Russian President Vladimir Putin has vehemently rejected the claim, stating that the Soviet Union was not the only country to have signed a deal with Nazi Germany.

Poland accuses Russia of rewriting the events of that period. However, Moscow believes that the Poles want to tailor history to suit the current political environment, while the West is trying to question Russia's status as a victorious power in World War II.

Sputnik: Who is rewriting history now? In the West, in Europe, they say that Russia started doing it. While in Moscow they say that we respond to their actions.

Alexei Pushkov: The attention that Russia is now paying to the history, particularly the history of World War II and the pre-war period, is undoubtedly due to the fact that the Western alliance countries are trying to question Russia's status as a victorious power in World War II.

This comes first and foremost from Poland and the Baltic States. The meaning of their actions is as follows: if we admit that Russia bears equal responsibility for World War II with Nazi Germany, it has no moral right to be considered a victorious power. In other words, this step is not only an attack on the image of Russia, not just the history of Russia, not only on the historical assessments adopted so far. This undermines the entire post-war world system because Russia is a victorious power in World War II; it is a permanent member of the UN Security Council with the right to veto just like the UK, USA, France, and China – the five victorious powers in World War II.

Since it is impossible to attack this fact directly – it was our flag that was raised on the Reichstag in May 1945 – the approach is made after the pre-war period. And they try to present the case as if the Second World War would not have started without the well-known agreement between the Soviet Union and Germany.

Sputnik: So this isn't a historical debate?

Alexei Pushkov: I believe this is a political dispute. It has a direct bearing on the world order that emerged after World War II. And that is why this dispute is so important. It involves more than just historians.

Historians in the West, in Poland, in Europe, in the USA even earlier have held the point of view that allegedly the Molotov–Ribbentrop Pact initiated the Second World War. However, up till now, political leaders and heads of state have not joined in this process. And now, the current Polish President Andrzej Duda – and he is not the only one – is engaged in this kind of propaganda. He was joined by the President of Ukraine Volodymyr Zelensky. That is, this is a step to undermine the present position of Russia through history. Here we should look for the roots of this campaign. And we respond to it and will continue to do so. The pre-war period is much more complex and ambiguous than the opponents of our country are trying to portray it. And the responsibility of same Poland, as well as some other European countries for unleashing the war, is very high.

Sputnik: Have you noticed that it is not the participants of the Yalta Conference, not the victor nations, but other countries that speak about it?

Alexei Pushkov: Unfortunately, they are also involved in this rhetoric. French President Emmanuel Macron has just stated that he sees Russia's attempts to hold the Polish people responsible for World War II...

Sputnik: Yes, Macron has said that in Krakow, speaking at Jagiellonian University...

We place responsibility on the Polish political elite – the Polish elite who ruled the country in the 30s, who were the first to conclude a non-aggression pact with Hitler in 1934, who were allied to him, who participated in the division of Czechoslovakia with Hitler and who received territorial acquisitions from the Munich conspiracy when Czechoslovakia was surrendered to Hitler. That Polish elite – yes, we condemn it.

President Putin talked about this when he recalled the moral and political image of some Polish figures of that period who wanted to erect a monument to Hitler in Warsaw for “the final solution of the Jewish issue in Poland”. These are historical facts; Poles have nothing to say to this and are trying to put everything down to the Molotov–Ribbentrop Pact. By the way, Macron did not say that Russia is responsible for the outbreak of World War II. He made it clear that he disagrees with the accusations of Poland that it bears its share of responsibility. But I believe it does.

Poland tried to reach an agreement with Nazi Germany, rejected any efforts to create a system of collective security, received its piece from Czechoslovakia after its partition. There were some politicians in Poland who thought about joint actions against the Soviet Union together with Germany. So it would be better for the leaders of responsible states to refrain from taking part in this polemic, first of all, for the state leaders who formed the anti-Hitler coalition. After all, by undermining the foundations and norms that have emerged in world politics since the Second World War, and which are based on the joint victory over Hitler's Germany, they are, in fact, undermining their position. And this carries the risk of a total revision of the entire post-war system.

Sputnik: As a result, rewriting history changes all post-war approaches, all regulations, and all statuses...

Alexei Pushkov: That is why I believe that the leaders of those nations must adhere to the version adopted in the Potsdam Conference and the United Nations Charter. Both the Potsdam Conference and the UN were based on the premise that the five victorious powers have a special position in the post-war world, and that constitutes the foundation of the modern international legal system.

I believe it would be right for the leaders of responsible states not to destroy this system by playing along with Warsaw, Tallinn or Riga, but to maintain this system. There is no other system. It is on these outcomes of World War II that lies the foundation of the United Nations, the only organisation that unites all the states of the world, the only one that, albeit symbolically, helps the cause of stability and preservation of peace.