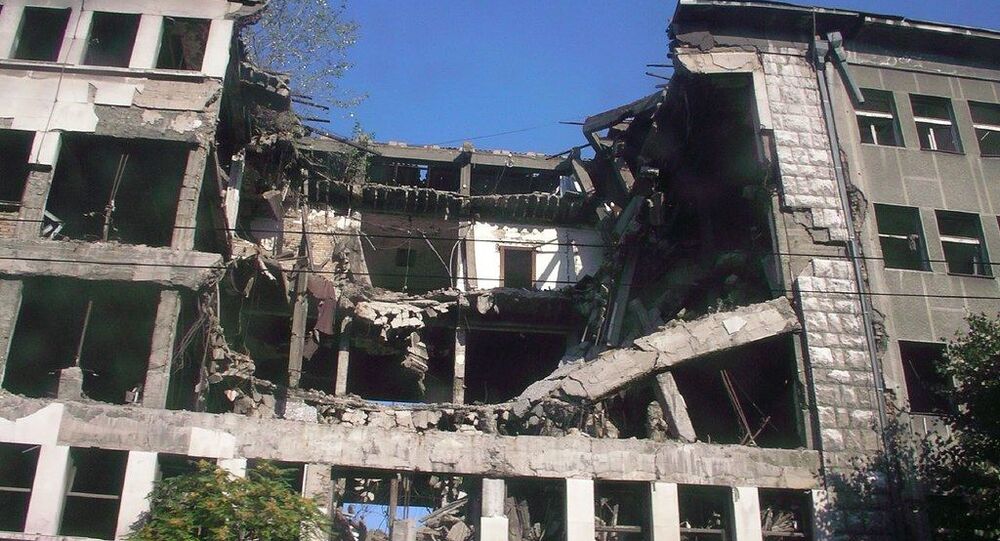 What Prevents Serbia From Exploring Aftermath of 1999 NATO Bombings?

Formed a year and a half ago, the interdepartmental commission of the Serbian government, which was supposed to study the aftermath of the 1999 bombing, hasn’t actually started work: only holding one meeting.

Sputnik talked to the members of this commission to discuss their suspicions that Serbia is pressured from the outside to prevent it from establishing the true consequences of NATO aggression.

Goran Trivan, Head of Serbia’s Ministry of Environmental Protection, who was appointed the coordinator of the new body, said that Serbia had an obligation to its citizens to establish the truth regarding NATO aggression.

“When we understand what happened, we’ll know what measures need to be taken to protect the country’s citizens and biodiversity from the consequences of the aggression,” he stressed.

However, the solemnly launched government commission hasn’t really done much since then, which is confirmed by its members – retired general Slobodan Petkovic and doctor Zorka Vukmirovic.

Only One Meeting in Year and a Half

“The first and only meeting of the Commission’s Management Committee was held on 11 June 2019, a year after the agreement between the ministries had been signed,” Dr. Vukmirovic recalled.

“During the meeting, some disagreement occurred between the team members because Minister Trivan supported the decisions that the project initiators commented on,” she said.

Moreover, according to Dr. Vukmirovic, commission members were asked to maintain strict secrecy while working on the project for the sake of state interests. Some of the participants in the meeting didn’t want to sign the resolution, emphasising that their purpose was to make the public aware of the facts, rather than to hide them. Vukmirovic said that secrecy was the only issue that the commission raised in a year and a half.

No Reaction from Prime Minister

“The participants in the initiative to establish the consequences of the NATO bombing repeatedly appealed to the Serbian Prime Minister of Serbia proposing to increase the interdepartmental commission’s efficiency, and indicating that the government should approve the signed interdepartmental agreement and the composition of the commission. This hasn’t been done yet,” Dr. Vukmirovic said.

According to Petkovic, who was head of the CBRN defence unit of the Serbian Armed Forces during the bombing, the commission hasn’t even yet been formed, since its formation is not confirmed by a government decree.

“Two years ago, an agreement was signed on the formation of this body; however, the process had to go further. The Government had to issue a decree determining the body’s status in order to get things going so that we, members of this team, could continue working. This agreement is where we stopped; all our demands to continue working remain unanswered,” the retired general explained.

Petkovic pointed out that members of the commission were required to sign a paper stating that they must keep secret all the data they receive. Those who didn’t want to work secretly said that they weren’t entitled to deceive the people and act in the interests of those who left us such a “legacy”, which is likely to result in many people getting ill.

Petkovic believes that this particular secrecy initiative will halt the commission's work.

“We wrote several letters to the Environmental Protection Minister. We addressed the Head of Government; Dr. Zorka Vukmirovic drew up an appeal, which we all signed, requesting that the commission be activated, that it should work. But nothing has happened so far. They continue slowing down the commission’s work,’ he said.

According to the retired general, the same forces that bombed Serbia are now exerting strong pressure on the country, which is slowing down the initiative to investigate the consequences of NATO aggression.

Petkovic recalled that the creation of the commission was initiated by the best Serbian scientists, in the belief that science can and should find answers to all the questions, but this requires political will.