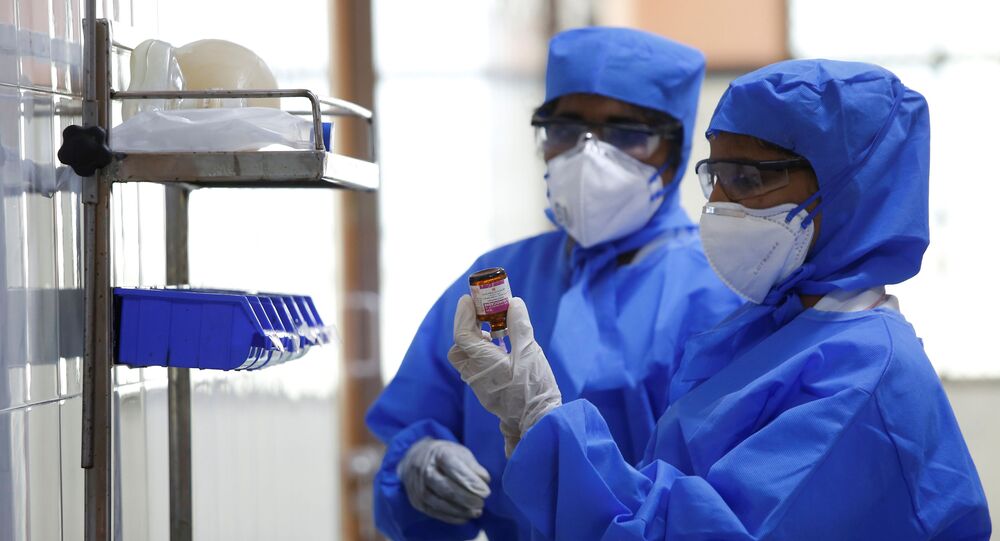 New Delhi (Sputnik): India is the world's third largest manufacturer of pharmaceuticals but imports 60-70% percent of its raw materials from China. Travel restrictions could have a huge impact on the Indian pharma industry as it also imports from units close to Wuhan - the epicentre of the outbreak.

Though India is one of the largest providers of generic drugs globally, it has only recently become dependent on imports of Chinese API's (active pharmaceutical ingredients) - the most basic building block of a medicine.

But in light of the coronavirus outbreak and a possible disruption to supplies, analysts believe the time has come for India to revive its domestic production of raw materials for pharmaceuticals.

“This situation (of dependence) has become like this only in last 20 years. Until 2000s, we were pretty sufficient in production of API. Over the years, we did not pay much attention to cheap imports from China,” said Sachin Chaturvedi, a board member of India's central bank.

India’s Chemicals and Fertilisers Ministry told parliament in 2018 that imports from China were cheaper and more cost-effective for pharma manufacturers.

When many facilities in China were shut for around a year to improve environmental compliance, India showcased its capacity to emerge as an efficient supplier of APIs – according to the Pharmaceutical Exports Promotion Council of India. Exports of bulk drugs from India in 2019 were worth $3.9 billion, an increase of 10.5 percent over the previous year.

“Full-fledged efforts are required to revive ITPL (develops of the export market for Indian pharmaceutical manufacturers) and other private sector units. We should use our full potential and capacity to fight back. In the next six months, we would have huge supply side constraint of generic pharmaceuticals,” Chaturvedi said.

India’s Minister for Chemical and Fertilisers D.V. Sadananda Gowda has maintained that the federal government is taking measures to boost indigenous manufacturing of bulk drugs/API and minimise the dependence on imports.

In 2016, the federal government withdrew exemption of customs duty on certain categories of bulk drugs and APIs.

Stating that the country aims to promote indigenous API under the 'Make in India' initiative, the minister said last year that production facilities had been established in north-eastern Assam and in Andhra Pradesh.

Highlighting the impact of supply constraints from China, the central bank board member said: “This would have an adverse impact if the situation persists . We require a bit of an effort in terms of enhancing India's own domestic production.”

Analysts believe that current inventory levels will only last for another two or three months.

“The outbreak of coronavirus in Wuhan, China would not have a material impact on the Indian pharmaceutical companies supported by inventory held by these companies," said Krishnanath Munde, associate director, India Ratings and Research - a Fitch group company.

Industry representatives, who did not wish to be named, contend that there won’t be any problem in the near term but a significant impact may be seen on supplies if the situation persists until April.

According to the figures mentioned in Parliament last year by the Directorate General of Commercial Intelligence and Statistics, itIndia imported bulk drugs and intermediates worth $2,738.46 million in 2016-2017; in 2017-18 it amounted to $2,993.25 million, and in 2018-19 it was $2,405.42 million, a decrease as India witnessed an increase in the export of bulk drugs in 2018-19 when China strengthened environmental regulations.

China has imposed several travel restrictions amid the spread of the epidemic, especially in Wuhan which is under complete shutdown. As the disease continues spreading to other countries, it has killed more than 600 people and infected over 31,000 in China alone.

India has so far reported only three confirmed cases of coronavirus and has taken measures such as temporarily suspending flights and e-visas to foreigners to contain its spread.