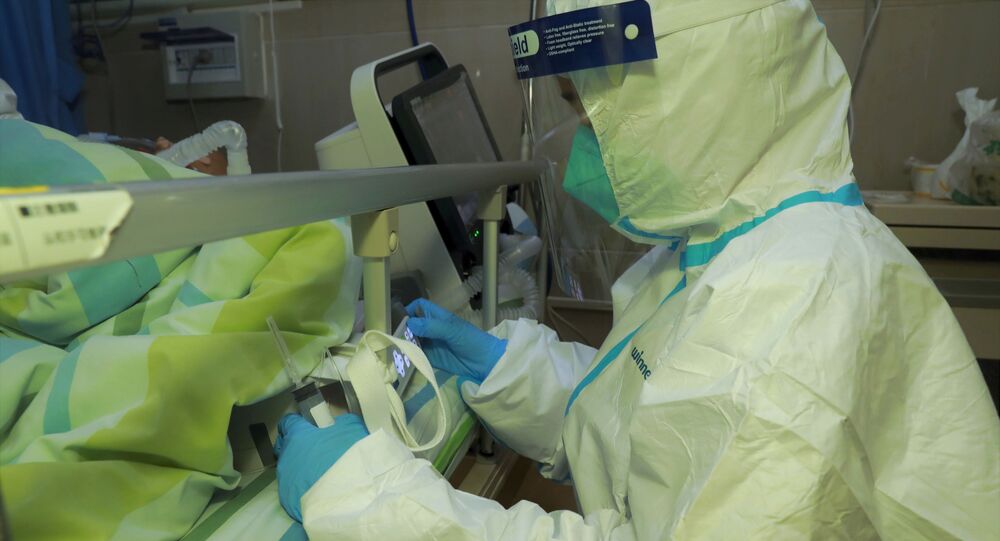 MOSCOW (Sputnik), Tommy Yang - Iris Liu, a 30-year-old Wuhan native, waited in line for more than eight hours on Wednesday at a hospital before her mother could receive Intravenous Therapy (IV) to improve her condition. Her 57-year-old mother had been fighting a mysterious lung infection since mid-January.

By the time her mother completed the IV treatment and returned home, it was almost 11 pm at night. Worried about the ongoing coronavirus outbreak in Wuhan that had killed over 100 people and sickened over 4500, Liu told her father, 61, to sleep in the living room to avoid the risk of being infected by her mother, who may have caught the deadly new virus.

But by early Thursday morning, Liu was awakened by the non-stop coughing from her father, who had been taking care of her mother for more than four days before asking her for help. Liu’s father suffered a mild stroke about ten years ago and was partially paralyzed on one side of his body.

After listening to her father cough for more than four hours, Liu got out of bed at 6 on Thursday morning and was ready to go to the hospital to wait in line for further treatment of her mother again.

"After waking up at 2 a.m. by my father’s cough, I noticed how serious his condition was after he coughed non-stop until 6 a.m. But I had to go to the hospital to stand in line for my mother," Liu said during a phone interview on Tuesday.

When her mother’s conditions improved after completing another round of IV treatment by noon, Liu realized that her father could be infected by the new coronavirus as he developed a fever.

"My mother suffered from a lung infection, but she never had a high fever. My father’s temperature jumped to over 39 degrees Celsius. I had to take him to the hospital," she said.

After doing various blood tests and CT scans for more than half of the day, doctors at the Wuhan Central Hospital told Liu by 9 pm on Thursday that her father was very likely to have contracted the new coronavirus, but could not confirm the diagnosis without the proper tests.

"My mother was never confirmed to be infected by the new coronavirus. I wasn’t sure if my mother infected my father or he got infected when visiting the hospital while taking care of my mother. The whole city is running short of the special tests for the coronavirus. The doctors just told us that my father was infected. But they also couldn’t give us the paper to confirm the infection," Liu said.

Amid the spread of the virus that led Chinese authorities to put Wuhan under total lockdown, the city’s hospitals were filled with patients. The average waiting time for a simply IV treatment at the hospitals was 6-8 hours and only patients with serious conditions, such as those who had trouble breathing, would be allowed to be hospitalized.

"The doctors at the Wuhan Central Hospital told me that my father had to be hospitalized because he needed to inhale additional oxygen to help him breathe. But that hospital had no beds available. They told us to look somewhere else," Liu said.

Devastated by her father’s condition and not being able to find a hospital bed for him, Liu decided to post her situation on Chinese social media Weibo in the hope of someone could offer her some assistance.

Luckily, warm-hearted Samaritans on Weibo suggested Liu try other hospitals further away from the epicentre of the outbreak in the city. Eventually, Liu found out that the Wuchang Hospital had the shortest waiting time, about 3-4 hours, for IV treatment and decided to try her luck there.

"The doctors at Wuchang Hospital told me: ‘Your father is in very serious condition and needs to be hospitalized. But we don’t have additional beds. You need to go check again.’ Luckily, the Wuchang Hospital cleared out a new building as the quarantine zone. My father was able to take a spot in the new quarantine zone," she said.

Many other local residents in Wuhan were not as lucky as Liu’s father.

© REUTERS / CARLOS GARCIA RAWLINS
People wearing masks walk across a street as the country is hit by an outbreak of the new coronavirus, in Beijing, China January 28, 2020.

"Doctors told us that there was an about 80 per cent chance that my grandfather was infected by the new coronavirus, but they couldn’t confirm without proper tests. They told us to take my grandfather to the designated hospitals that could quarantine the infected patients. But there was no bed available anywhere. I don’t want to lose both of my grandparents in one week!" Kong said during a phone interview on Tuesday.

According to Kong, her case was not unique in hard-hit communities in Wuhan.

"From what I learned in my community, my family was not the only one facing such situations where both of the elderlies became gravely ill recently. In some families, both of elderlies passed away," she said.

Kong’s family cremated her grandmother quickly without any confirmation about whether she was infected by the coronavirus or not. Kong just hoped that her grandfather still had a fighting chance.

To address the shortage of hospital beds in the city, local authorities in Wuhan said two new temporary hospitals were being constructed and could offer at least 2,000 additional beds upon completion.

Save For Those in Need

After checking her father in at the Wuchang Hospital under quarantine, Liu began to develop a fever herself three days ago and her husband started to experience diarrhoea.

"I have had a fever as high as 38.7 degrees [Celsius] for three days. My temperature would drop under 37 degrees after taking some medicine. But it would spike up again the next morning. My husband began to have diarrhoea. I tried to keep some distance from him. We began to sleep in different rooms and I would disinfect the bathroom with alcohol after using it," she said.

Liu said she did not want to go to the hospital to seek treatment at the moment, because she wanted to leave the previous medical resources to the patients who were in much more serious conditions.

"As someone at a young age, why do I need to try to go to the hospital and occupy a bed which could be used by someone who needs it much more? I try to keep a good diet and try to beat the virus by myself. If it’s not enough, I’ll take some medicine or IV treatment. But I don’t think I’ll try to get hospitalized, because those beds are for the high-risk groups. I’ll never compete with them for that. Before I’m confirmed to be infected by the coronavirus, I’m still holding out hopes that I didn’t catch the virus," she said.

Nevertheless, Liu admitted that if she was confirmed by the proper test to have been infected by the new coronavirus, she would want to be hospitalized and quarantined to avoid infecting others.

According to Liu, all the hospitals in Wuhan have been running short of the proper test for the new coronavirus, which makes it very difficult to confirm infections for possible patients like her family members.

After being under quarantine for more than five days, Liu’s father has not been confirmed to have contracted the coronavirus or not.