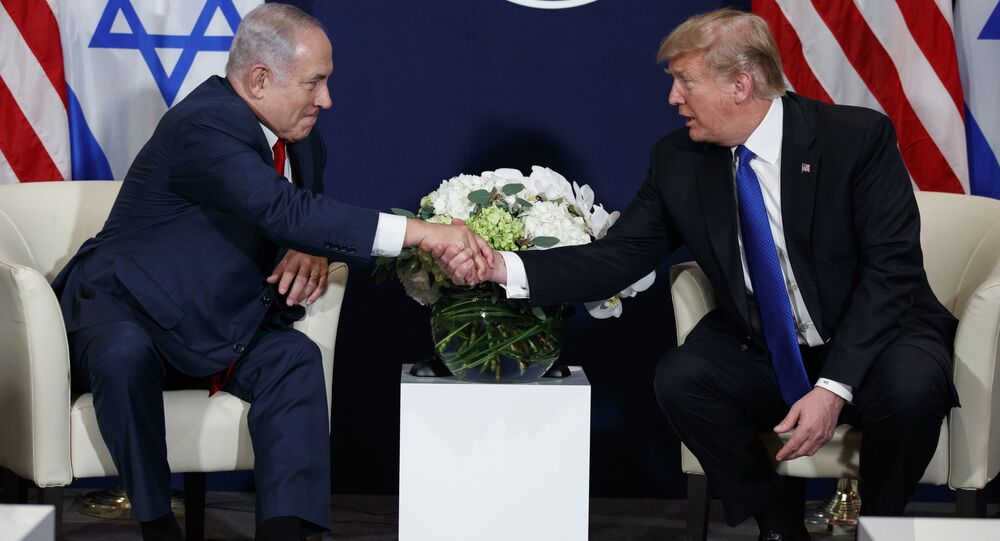 Prime Minister Benjamin Netanyahu is set to travel to Washington later today where US President Donald Trump is expected to roll out his "deal of the century" plan aimed at resolving the Israeli-Palestinian conflict.

The peace initiative reportedly presupposes that Jerusalem, including its Old City, will remain in Israel's hands, with the Palestinians getting access to the Israeli capital.

In addition, the Jewish state will be allowed to annex some 40 percent of the West Bank, considered occupied under international law, while in return the Palestinians will be given territories in the Negev Desert located in the south of Israel.

The plan also stipulates that the Palestinians will be given an independent state four years after the agreement is signed (as well as billions of dollars to develop it) and only under the condition that they won't establish a military force - neither in the West Bank nor in Gaza.

The Deal Doesn't Stand a Chance

Dr Yossi Beilin, the architect and one of the main negotiators of the Oslo Accords, the historic agreement between Israel and the Palestinians signed in 1993, says nobody takes the plan seriously.

One such person is the Israeli PM.

"Netanyahu will, of course, thank the president for his friendship and will say it is the most far-reaching plan the American administration has ever given but he will also need to say that he will need to deal with it once he gets back, expressing his hope that the plan will eventually be promoted".

The only problem is that it never will be, believes Beilin. Bound by agreements with the hawkish parties that promote the notion of Greater Israel that sees all Palestinian lands in the West Bank and even Gaza as part of the Jewish state, Netanyahu will find it difficult to convince the right-wing bloc that annexing "only" 40 percent of the territories is a good deal.

It will also be tough to sell the plan even to Netanyahu's own party. "The central committee of Likud will never be ready to accept the idea of a two-state solution. That's why Netanyahu has never brought it to its attention. He knew he will never get a majority for this", explained the former negotiator.

They Are Not Alone

The right-wing circles are far from being the only elements expected to reject the initiative.

President Mahmoud Abbas has already warned the US administration and Israel not to cross any "red lines" and said one-sided moves would inevitably lead to a series of measures by the Palestinians.

The Palestinian Authority considers the current US administration as biased against the Palestinians. This has been expressed not only in Trump's 2018 recognition of Jerusalem as Israel's capital, but also in Washington's acknowledgement a year later of the legality of Israeli settlements in the West Bank - moves that have been rejected by the PA leadership.

Israel's liberal circles are also eyeing the proposal with suspicion not only because the agreement is bypassing the Palestinians, whom they see as the only side they should be negotiating with, but also because of the announcement's timing.

At the end of the week, Israel's parliament, the Knesset, is set to start a number of discussions that will determine whether the prime minister, who is involved in a series of graft probes, including buying positive press and receiving illegal gifts, will be granted immunity that will protect him from facing a trial.

"No doubt that the release time of the plan is not accidental. Netanyahu doesn't see any way out of his situation so he hopes to divert the public's attention from his legal problems by introducing this deal. The truth is that he is desperate".

© AP Photo / Adel Hana
An elderly Palestinian man falls on the ground after being shot by Israeli troops during a deadly protest at the Gaza Strip's border with Israel, east of Khan Younis, Gaza Strip, Monday, May 14, 2018

And he is not alone. Embroiled in an impeachment process and accused of using his power to investigate a political rival, the peace initiative might be a good refuge for President Trump too. Butjust like Netanyahu, he doesn't think it will ever work, says Beilin.

"While the US administration initially thought the plan could succeed, they finally realised it doesn't stand a chance. So gradually it has evolved into a political tool. The idea is to offer something the Palestinians can never agree to and then be able to say they are not reliable partners. That would not only give Netanyahu the opportunity to annex parts of the West Bank but will also send a nudge to the American right".