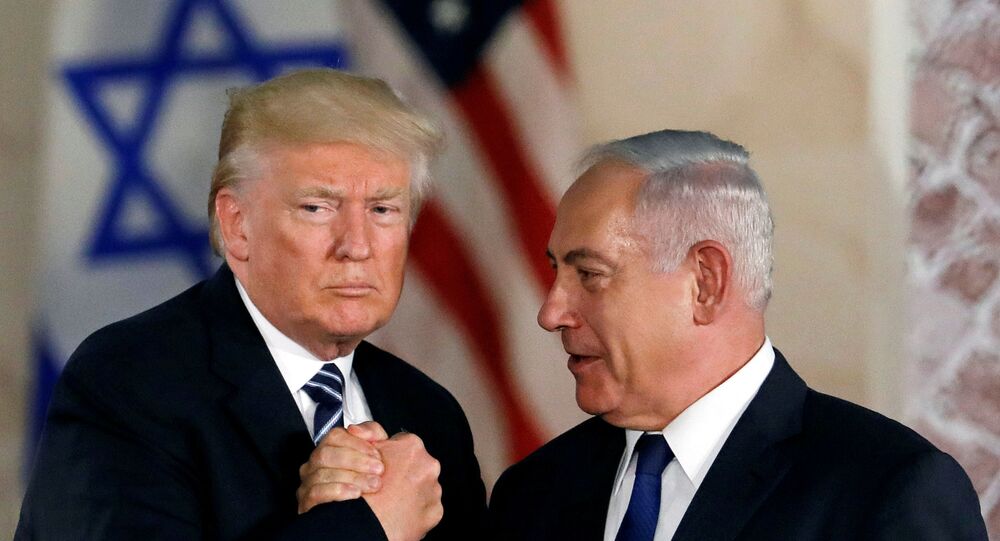 Striking Deal or Blowing Smoke? Why Trump and Netanyahu to Meet Ahead of Israeli PM's Immunity Vote

The US president is about to reveal the "deal of the century" peace plan for the Israeli-Palestinian conflict, something he has been teasing with for the last few years, but the timing raises questions on whether its publication has been conveniently scheduled to offset political challenges both in Israel and the US.

The announcement of talks slated to be held on 28 January between US President Donald Trump and Israeli Prime Minister Benjamin Netanyahu came as a big surprise, as that is the day that Netanyahu's request for immunity from prosecution in three corruption cases will be reviewed by the Knesset. No less surprising were two other announcements – that the Israeli prime minister's rival, Benny Gantz from the Blue and White Alliance, was also invited for talks in Washington and that Trump is planning to publish his "deal of the century" just ahead of them.

Officially, the negotiations will be devoted to the much anticipated (by some) peace plan – but is it possible that there is a larger political agenda behind these talks?

One of the main concerns for these talks, apart from Netanyahu missing the crucial process in the Knesset, is the fact that Israel, one of the parties to the conflict, has been unable to assemble a new government over the course of the past year, having already held two elections and a new one coming up in a little over a month.

It's unlikely that the 28 January talks in Washington will produce anything positive without a proper government having been formed in Israel, Yossi Mekelberg, an international relations professor at Regent's University London, says. He believes that the entire sit-down in DC could turn out to be just a PR stunt for the politicians involved.

"In the world where there is more PR than substance anything can happen. We have too much of [a] political reality show than dealing with the realities on the ground. So, this is another photo opportunity instead of dealing with the core issues of [the Israeli-Palestinian] conflict", the professor said.

Another possibility that Mekelberg sees in this situation is that Trump is trying to "save Netanyahu's skin" from facing a jail sentence by forcing him and Gantz to negotiate a coalition government agreement for the period after the March general election. This way, the talks might resolve both of Netanyahu's woes – criminal prosecution, which he sees as an attempt to oust him – and lead to the formation of a new cabinet.

The Israeli prime minister is not the only participant in these talks who is facing legal trouble. President Trump is currently going through an impeachment trial in the Senate, where lawmakers will decide whether he abused his power and tried to solicit a foreign country to meddle in the upcoming 2020 US election. Although the Republican Party controls the Senate and thus can easily acquit the POTUS, there is still a chance that he could be removed from office if some of his party members decide to defect and vote against him.

It is likely that the 28 January meeting was organised to play into both Trump and Netanyahu's hands in terms of their legal woes, while having "little to do with diplomacy and peacemaking", Eran Etzion, an Israeli diplomat and former deputy head of the National Security Council believes. He adds that Gantz, who reportedly intends to decline Washington's invitation, was only asked to attend in order to "camouflage" Trump and Netanyahu's true intentions.

"They have a common personal and political interest to push this forward right now. At least in Israeli eyes it looks extremely manipulative and amounts to, I would suggest, a disturbing intervention in the democratic processes of Israel 40 days before the elections", the ex-diplomat said.

The former Israeli official further indicates that Trump has long withheld his "deal of the century" peace plan, refusing to show it to the public for at least two years, suggesting that the agreement has long been ready, but has been reserved for a politically convenient moment.

The last time the Trump administration made major revelations regarding the plan was in June 2019, publishing its economic part just three months prior to the Israeli snap general election. This time, the new revelation will come a little over a month before the second snap election, after the previous two votes resulted in political stalemates, where no party has enough seats to form a coalition government.

Little Hope for Trump's "Deal of the Century" to Gain Traction

So far, not much is known about the peace plan itself, with the exception of the economic part, which was presented by Trump's adviser Jared Kushner last year, but there has been much speculation about its contents in the Israeli and international media. The plan will involve $50 billion in investments into the Palestinian National Authority-administered West Bank as well as the Gaza Strip and the construction of a transport corridor linking the separated Palestinian territories. Reports regarding the political part of it vary, but multiple have mentioned the creation of a Palestinian state, but without armed forces and with its borders protected by Israel. In addition, Israel will be able to keep the entire city of Jerusalem and its West Bank settlements – something that is likely to infuriate the Palestinian side.

The Palestinian National Authority and Hamas, which is reportedly also involved in the implementation of the deal, denounced Trump's peace plan and the US role as a mediator in the Israeli-Palestinian conflict after Washington's decision to recognise Jerusalem as the capital of the Jewish state. Perceived US bias towards Israel on a matter as crucial to the Palestinians as the status of Jerusalem and a reported lack of compensation for the original Palestinian refugees have doomed Washington’s attempts to gain support for its peace plan from the PNA, Professor Mekelberg says.

"With this kind of approach no one should take Trump’s plan too seriously. Is the support of the settlements another hindrance on any serious talk about the two-state solution? Hence, it is a deal to actually exonerate Israel’s building settlements", he said.

Trump's plans lack any international support, even outside the Middle East, unlike previous peace plans, former Israeli diplomat Eran Etzion points out. The former Israeli official adds that Trump's "deal of the century" stands no chance of being implemented properly while US relations with all the relevant parties, except Israel and Saudi Arabia, are in a "dysfunctional state".