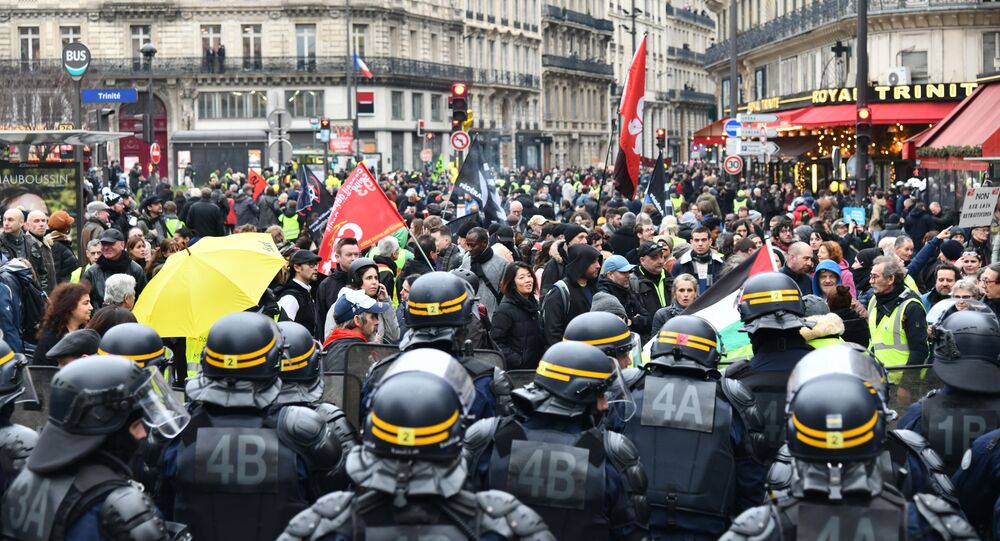 Fight for Security in France: No Success in Past Two Years – Police Union Representative

Recent figures from the Ministry of the Interior show that the number of attacks on citizens is growing inexorably in France. In 2019, 30 injuries per hour were recorded; that is 714 cases per day with their total number reaching 260,500. The number of beatings has increased by 8% compared to the previous year, and five times when compared to 2010.

To this should be added a 9% increase in the number of killings. Last year, 970 murders were committed, with an average of three per day.

Linda Kebbab, National Delegate to the SGP Police Union, says that she is not surprised by the figures from the Ministry of the Interior’s latest report. She believes that the data given is undoubtedly “lower than in reality.”

Regarding violence against women, despite measures proposed by the government and Secretary of State for Gender Equality Marlène Schiappa, the report indicates that 22,900 incidents of rape were recorded in 2019, with an average of 63 cases per day. This indicates an increase of 19 percent. However, in reality, the situation is even worse given that only one fifth of victims turn to the police for help, so about 100,000 rapes were committed over a year.

Theft is Not That Profitable

Even if some figures have fallen, this doesn’t mean that the Ministry of Internal Affairs has started performing better. If the statistics on armed robbery (7,600 per year, unchanged) and robbery without using weapons (79,100, -2%) seem correct, it, first of all, indicates changes in the criminal environment.

“For these acts, they are brought before a jury; so, we are talking about crimes. This is what holds potential robbers back,” Linda Kebbab explains.

“Robbing a jewellery store or a bank is difficult. Moreover, even small shops now have serious security systems in place. That is, robbing a store for €150 is not worth it. The ratio between the risk of being arrested and profit is no longer as interesting as before.”

The police have also noted this over the past few years: “the suspects tell us that armed robberies are only a stepping stone to the drug trade because they need cash to do that.” Instead of robbing shops, criminals prefer attacking and robbing people in public places. This leads to the increase in figures.

“Unfortunately, often individuals don’t turn to police if their property has been slightly damaged. If there is no culprit, insurance companies don’t pay compensations,” Linda Kebbab explains.

The figures create the illusion of a calm and peaceful country.

Geography of Crime: Failure of Struggle for Security in the Country

In some regions, the crime rate is higher than in others, but only three departments saw a decrease in the number of attacks – Aude, Hautes-Alpes, and Somme. This indicates the national character of the problem, Linda Kebbab says.

“What are these regions united by? The Ministry of the Interior. This is a total failure. This is a failure of the department, which should force the police to work; this is the failure of law enforcement agencies,” she notes.

“Over the past two years, there has clearly been no success. The strategy doesn’t correspond to what is happening in reality. Too many law enforcement officers are working; at the end of 2019 they were working in overdrive, but this didn't bring about any result – the employees are exhausted and this is unproductive. And you can’t even blame the Yellow Vests for this – this is a global problem, a problem of everyday strategy.”

This global problem appears to be felt by every employee, at their own level. One police officer said that his job was “the cask of Danaides.” He constantly feels that his efforts ultimately serve nothing. Not to mention the fact that the judiciary is often too lenient and therefore unable to prevent a relapse.

© AP Photo / Michel Euler
Riot police officers stand after a man attacked passerby Friday Jan.3, 2020 in Villejuif, south of Paris. A man armed with a knife rampaged through a Paris park attacking passers-by seemingly at random Friday, killing at least one person and injuring two others before police shot him dead, officials said.

The situation is worrying even in Paris, where until recently there was a low crime rate “due to a higher concentration of police officers.” In 2019, the number of attacks in Paris increased by 9 points.

Given that police officers are exhausted, preventive work – patrolling and identifying offences in the process of wrong-doing – needs to be limited.

“You can’t be effective by forcing law enforcement officers to work 50 hours a week without any support from their command,” Linda Kebbab says.

As you know, the police are sensitive people. They take any problem with their bosses hard. The death of Cédric Chouviat during a police check enabled the French president to demand “good behaviour” from law enforcement officials. That order was poorly received.

“They say they won’t be engaged in preventive activities anymore – if it’s for them take pictures of me, condemn and punish me, it’s all in vain.”

Of course, Linda Kebbab regrets the death of Cédric Chouviat, but she fears the social network effect. The SGP union has supported the Grand Amendment in the Senate: if recording police operations is still legal, the police want their faces to be blurred in the videos posted on Twitter and other social networks.

“Posting videos of a police operation is a universal right. But nobody wants to see their face on the internet without any investigation.”

The climate of irriatation appears to be growing daily among police officers.

Nevertheless, despite this and contrary to the Yellow Vest movement, Linda Kebbab wants to believe that the connection between the police and the people is still strong. Indeed, according to a poll by IFOP, 50% of French citizens still have a positive image of law enforcement officers.

Will urban unrest endanger areas and riots at Yellow Vests’ demonstrations continue in 2020? According to Linda Kebbab, the latter have become a “real turn” and a “significant event of 2019”, a real challenge for police officers, caught between the hammer of protests and the anvil of the current government. No one can answer this question; and, given the circumstances, the lack of good governance may lead to disaster:

“There is an upsurge in violence, constant tension in French society; a spark is enough to make everything explode. There is such detachment from what is happening on the ground… and this is not taken into account,” Linda Kebbab concluded.