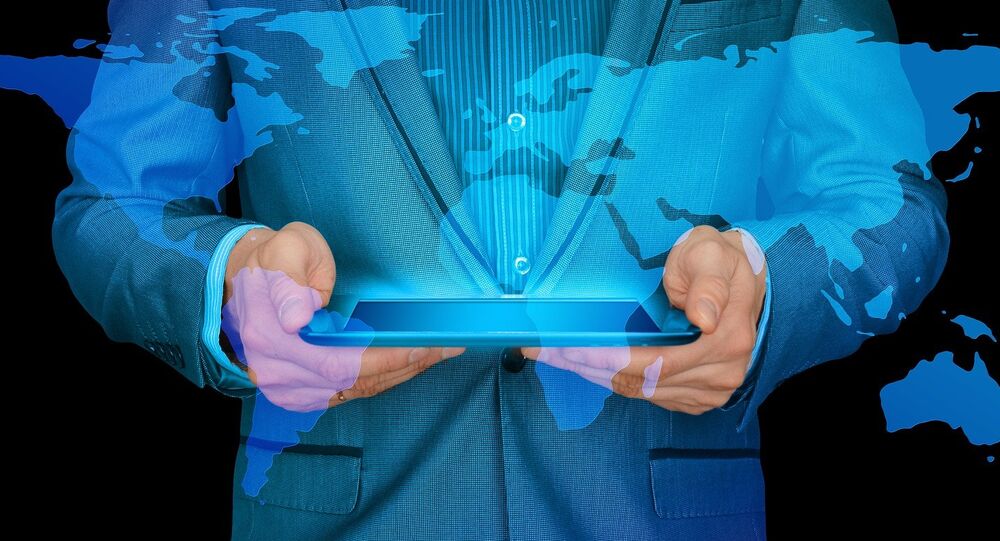 US-French Tax Truce: Time of One Global Internet is Over, Now We Have at Least Five - Prof

A tariff ceasefire deal struck by American and French presidents on 19 January indicates that both sides realise that there would be no winner in a potential US-France trade war, say European academics, agreeing that taxing Big Tech operating in Europe seems reasonable and remains a sensitive issue for the EU.

US President Donald Trump and his French counterpart Emmanuel Macron agreed Sunday that Paris would put its digital tax on the shelf until 2021 in exchange for a ceasefire on US retaliatory tariffs.

Great discussion with @realDonaldTrump on digital tax. We will work together on a good agreement to avoid tariff escalation.

​Previously, France planned to slap levies on Google, Apple, Facebook and Amazon (GAFA) in case the EU fails to introduce bloc-wide tax regulations on Big Tech companies. In response to the proposed measure, the Trump administration threatened to levy tariffs by up to 100 percent on $2.4 billion worth of French goods, including Champagne, sparkling wine and cheese.

Taxing Big Tech in EU is a Good Idea

Roland Benedikter, a research professor of multidisciplinary political analysis at the Willy Brandt Center of the University of Wroclaw-Breslau, thinks the idea to tax American tech giants operating in Europe is a step in the right direction.

"We speak in theory now about five internets, not about one", Benedikter observes. "There was the idea that there is one internet globally and it has the same rules [for everyone]. But this time is over. Now we have at least five internets: the European internet, which protects privacy and sanctions bad behaviour, we have the Chinese internet that puts everything on surveillance, we have the Russian [internet] which is a national independent internet that can be taken off from the global network and we have Washington’s internet that favours business and national profit… And the fifth dimension of the internet is of course Silicon Valley's internet with no control and total freedom".

According to the professor, the French president's initiative resonates with other European leaders: "Europe wants to tax foreign firms, making profit on its own surveillance", he notes. "Macron’s goal is, of course, to increase long-term or medium-term tax revenues".

The academic does not think that the tariff row between France and the US will further escalate when the truce is over.

Benedikter suggests that the US apparently realises that "there must be some kind of taxation for firms that have for decades long now taken over proportional profit out of the Internet and tax free roaming throughout the world".

Besides, the professor doubts that the Trump administration "can afford to put up to 100 percent of tariffs on French cheese or wine or whatever or champagne", highlighting that these goods are too popular.

"It's in the interests of Trump to avoid any tariffs on such popular goods as French consumer goods in the United States, at least until the next election is history", he presumes.

Kevin Dowd, a professor of finance and economics at Durham University Business School, UK, echoes Benedikter by saying that the issue of tax on digital revenues is "a sensitive one for Western Europeans".

"There is a sense, in my opinion a justified one, that US digital firms are paying far too little tax", Dowd remarks.

However, the other side of the coin is that Emmanuel Macron is weaponising the issue to ensure his "grandstanding", according to the British academic.

"[Macron] imagines himself to be Europe’s up and coming leader, as [German Chancellor] Merkel goes into her lame duck period, and he is staking his claim to that leadership. His stance on the digital tax is thus part of a broader pattern. In reality, Macron’s position is weak and his vision of more taxes and more regulation is on the wrong side of history", Dowd believes.

The professor deems that France would not be able to endure US retaliation tariffs as its economy is already in a bad shape. "In any case, tariffs are set by the EU not by France," he highlights, "so, really, Macron should stay out of EU tariff issues and attend to his own domestic problems, of which he has many".

"Agreeing truce for a year allows the issue to go onto the backburner, one hopes for good", he notes.

According to Dowd, there's no bigger winner in the recent deal: "The real issue is that both countries would lose badly if there were an escalation in this trade dispute, which also has to be seen in the broader context of Trump’s escalation of trade barriers with the EU as whole, not to mention those with China too", he says.

"Both countries are led by presidents who do not understand the benefits of free trade", he underscores. "Trump worships tariffs, Macron worships regulation. This is not a good mix for either country or the world economy".