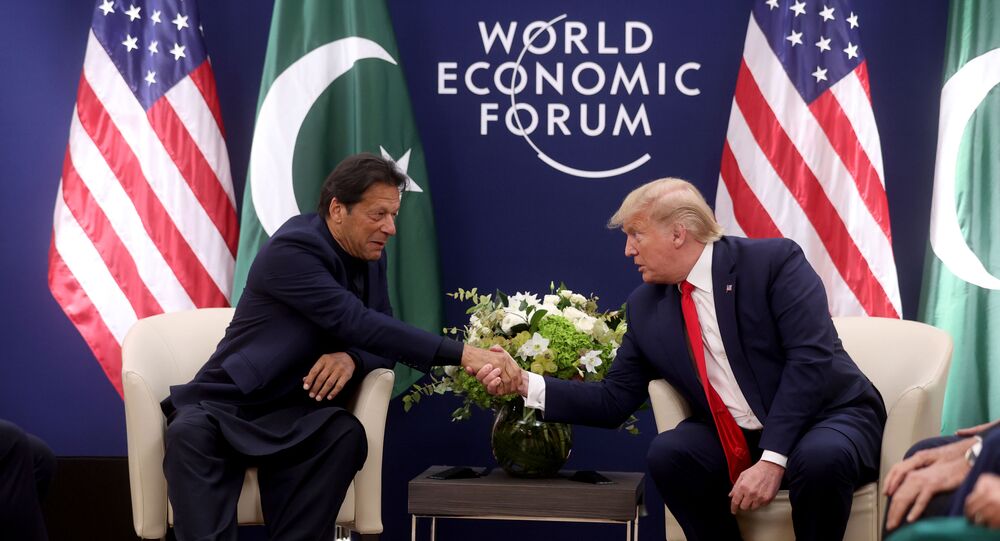 New Delhi (Sputnik): Ahead of meeting Pakistani Prime Minister Imran Khan on the sidelines of the World Economic Forum (WEF) in Davos, Switzerland, President Donald Trump said Islamabad has been told to stop cross-border terrorism and the bankrolling of terror groups suspected of directing attacks against India.

Former Indian diplomats on Wednesday said they were not surprised by US President Donald Trump's earlier statement that he had been discussing the Kashmir issue with Pakistani Prime Minister Imran Khan and also working with the latter on "some borders”.

They said if Trump is suggesting a redrawing of borders in South Asia, such a “preposterous step” could affect Washington's future foreign policy dynamics with the region.

“I think President Donald Trump is trying to achieve a balance in its relations with Pakistan. By and large, this talk of ‘working together on some borders’ is aimed at satisfying Islamabad as Washington still needs the latter’s help in dealing with the situation in Afghanistan and how quickly the US can be facilitated to move its troops out of that country,” former Indian diplomat Ashok Sajjanhar says.

The US would not be going back to the situation that prevailed on 1 January, 2018, when Trump slammed previous US governments for supporting Pakistan monetarily when Islamabad gave nothing in return except lies and deceit, Sajjanhar added.

He recalls Trump as saying that the “US had foolishly given away more than $33 billion to Pakistan in aid and, in return, Pakistan considered American leaders fools.”

“We won’t come back to that situation. There will be no withdrawal of funding. Though the existing narrative will continue, Pakistan needs to be pressurised on terrorism. The US must not succumb to Pakistan’s lobbying it to back its efforts to get it off the Grey List at the FATF’s Financial Action Task Force review meeting in Beijing this week,” Sajjanhar states.

Insofar as Trump’s suggestion that he was discussing or would be discussing the Kashmir issue with Khan in Davos, Sajjanhar said that from India’s point of view, it needed to be looked at in terms of the positive outcomes of last month’s 2+2 US-India Dialogue in Washington between the foreign and defence ministers of the two countries.

“We (India) need to impress upon the US that Jammu and Kashmir is peaceful, the situation there is improving and getting better,” the former Indian envoy to Kazakhstan, Switzerland, and Latvia said.

India’s former ambassador to Uzbekistan and Turkey M.K. Bhadrakumar said: “Imran Khan and President Trump have been discussing Kashmir in the past, so in that sense, Trump’s statement is not at all a surprise. This talk of having discussions with Imran on some borders is an enigmatic statement. Trump can't discuss India’s borders with Pakistan just as the US is not in a position to talk about redrawing its borders with Mexico.”

“Redrawing of borders is a preposterous idea. There will be a lack of acceptability. Pakistan will fire all six cylinders to ensure US involvement in Kashmir. In talking with the US, Pakistan has established a linkage between Afghanistan and Kashmir. It has consistently projected to Washington that peace in Afghanistan is inconceivable without resolving the Kashmir issue,” Bhadrakumar added.

On Tuesday, President Trump said that he and Pakistan Prime Minister Khan were “working together on some borders” and discussing the Kashmir issue ahead of Trump's likely visit to India in February.

“We're working together on some borders, and we're talking about Kashmir and the relation to what's going on with Pakistan and India. And if we can help, we certainly will be helping. And we've been watching that and following it very, very closely,” Trump said.

© REUTERS / CARLO ALLEGRI
Twitter Amused as Imran Khan Urges Trump to Help Solve Kashmir Crisis as 'World Leader'
His first official visit to India, however, will depend on the outcome of impeachment proceedings in the US Senate that begin on Wednesday. A swift exoneration is expected to lead to a quick India visit, in part to burnish his foreign policy legacy, media reports said.

“For us, in Pakistan, it (India) is a big issue. And, of course, we always hope that the US will play its part in resolving it because no other country can,” the Pakistan prime minister said.

Since the abrogation of Kashmir's special status, Pakistan has been on a diplomatic offensive, alleging human rights violations in the region by India - which India has strongly denied.