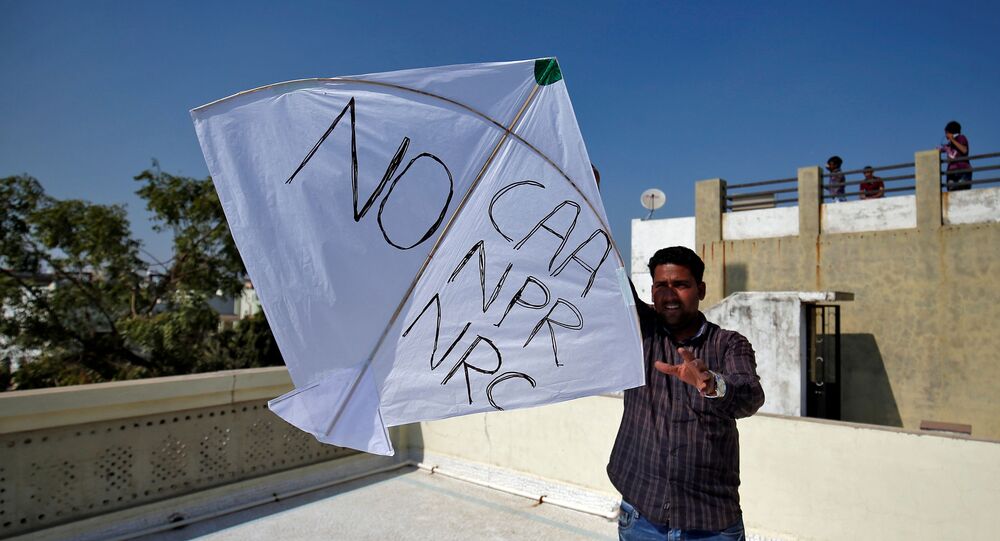 The Citizenship Amendment Act (CAA) has become a test for the Indian leadership as some states are opposing the implementation of the new law, dubbed by the political opposition as "anti-Muslim". Amrita Dhillon, the founding editor of a New Delhi-based magazine, The Kootneeti, explains what's behind the protests.

India has been witnessing large-scale protests since the passage of the Citizenship Amendment Act (CAA) in December 2019 while upcoming assembly elections in Delhi in February, and the vote to elect 73 members of the Rajya Sabha, India's Parliament's upper chamber are exacerbating tensions.

The amendment, which allows granting citizenship to persecuted Hindus, Sikhs, Christians, Buddhists and Parsis from Pakistan, Bangladesh and Afghanistan, is widely seen as "anti-Muslim" by the country's opposition parties and human rights activists. Addressing the issue at the Belur Math in Kolkata in mid-January, Indian Prime Minister Narendra Modi elaborated that the legislation is by no means discriminatory and is aimed at giving citizenship to people and not taking it away from anyone.

The protests, which have claimed the lives of 25, erupted as the country managed to calm down tensions triggered by New Delhi's law changing the constitutional status of Jammu and Kashmir in August 2019 and transforming the state into two federally administered territories. Since then, India's security forces have been watching the region closely to avert terror attacks from jihadi terrorist groups.

Sputnik: Why did the CAA legislation which was enacted into law on 12 December 2019 trigger a huge wave of protests in India? What regions are mostly affected by the unrest and what are the driving forces behind it?

Amrita Dhillon: First of all, the entire protest is not about CAA only, it is majorly because of the combination of NRC (National Register for Citizens) and CAA (Citizenship Amendment Act). There are two aspects of the ongoing protests, which due to different agendas of different interest groups are sparsely highlighted.

First, the protests started from the Indian state of Assam where the protestors are having different demands than protestors in other parts of India. If you see the map of India, North East India is shaped by seven states or say seven sisters states which share their border with Bangladesh and Myanmar, both the countries have their own refugee problems, like illegal immigrants from Bangladesh crossing into Indian territories in the search of jobs, much like the situation in US-Mexico.

Whereas, the seven sister states saw an influx of Rohingyas from bordering Myanmar. The protestors in these states are already facing much of the refugee crisis and are against taking in any of the refugees irrespective of their religion, due to their own unemployment issues and as an attack on their indigenous population. That's why they started opposing it first as they will be the first one affected by this decision.

Second, now comes the protestors from rest of India, who believe that CAA is discriminatory and purposely exclude Muslims from the bill to satiate the agenda of BJP's parent organisation RSS. However, there is much misinformation among the public, spread by different groups carrying their own interests.

Such protests are dominant in the capital New Delhi and West Bengal (which also shares borders with Bangladesh).

© REUTERS / ADNAN ABIDI
Saira, mother of Aleem Ansari, who died during clashes with police following protests against a new citizenship law, mourn outside their house in Meerut, in the northern state of Uttar Pradesh, India, December 24, 2019

Sputnik: What was the government's motivation to introduce the measure? What did it plan to achieve through the implementation of the bill? Did protests catch the Indian government by surprise?

Amrita Dhillon: The government brought this with a sole aim to drive away illegal immigrants, especially Rohingyas and illegal Bangladeshi immigrants, which is not possible in a country with a vast population like India, due to lack of any centralised database of all its citizen.

It will be impossible for the government to find out illegal immigrants, that's why government proposes to bring NRC, which asks people to show documents of their ancestors dating back to a specific year, say 1971 (year of creation of Bangladesh). However, in my opinion, this move will not help much as it's more like finding a needle in the haystack.

The government and administration expected protests, but they didn't expect a violent protest resulting in damage to public properties. Many videos are surfacing where protestors are throwing stones at trains, burning them, derailing them which goes against the very nature of their protests which protestors claim is inspired by the ideology of Gandhi and Nehru.

Sputnik: What's the situation is Kashmir? What measures have been taken by far to maintain stability in the region? Are the CAA protests anyhow related to the Kashmir issue in your opinion?

Amrita Dhillon: The situation in Kashmir has not much improved, except the number of terror attacks, which is comparatively low. The administration is doing its best, however, in today's mobile age the internet is fuel, which is having a similar impact in Kashmir as it would have at any other city/state without internet. The internet is one of the basic rights, however, due to the fragile nature of propaganda by our western neighbour, authorities are unable to lift restrictions.

Is there a CAA connection with Kashmir? Not at all! There is a set of radical protestors or Twitter trolls like Asif Ghafoor from Pakistan, who are just trying to push the Kashmir agenda under the banner of CAA.

Amrita Dhillon is the Founding Editor at The Kootneeti – A New Delhi based publication on international relations & diplomacy.