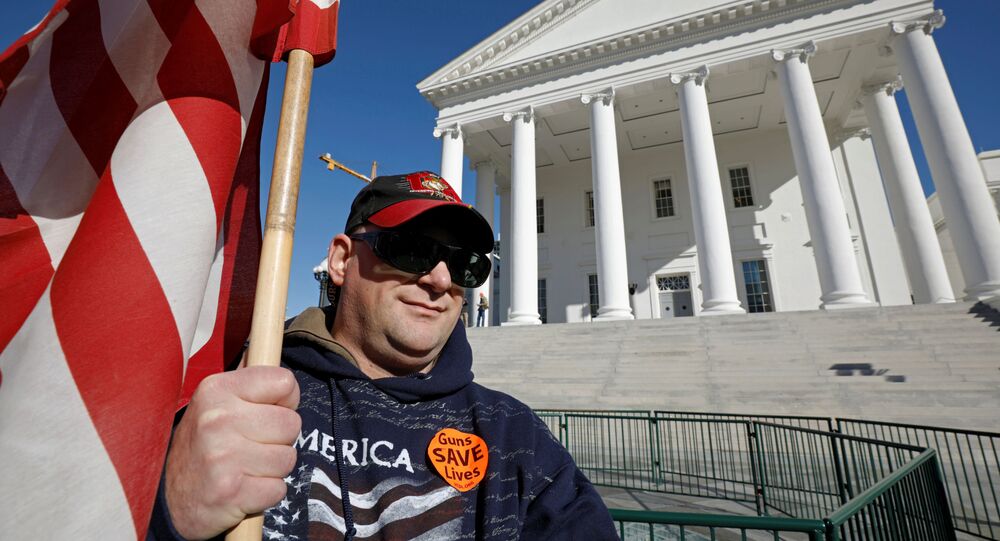 Virginia Governor Ralph Northam and Democrats in the state General Assembly have promised to pass a package of gun control measures, stirring a debate over the state's gun laws.

Sputnik: Today in Richmond pro and anti-gun lobbyists rally over sweeping state gun control legislation. What’s your assessment with regard to the changing of the state’s gun laws? What are the reasons behind this and should the laws be changed?

Tina Ramirez: I think that the governor and the Democratic Party have gone beyond the Second Amendment and they're presenting a lot of unconstitutional legislation and it's infuriated many law-abiding citizens. And so what you see now is a peaceful protest by gun rights lobbyists and individuals to stand up for their constitutional rights. The anti-gun component of it - that you mention was, I don't know where that came from, it was a lobby day for the gun rights groups. Now, if anti-gun rights groups have joined - that simply because of the governor escalating the situation.

Sputnik: And should the laws be changed in the first place, in your view?

Tina Ramirez: No. In my position, we don't need any changes to laws. We have enough laws on the books to handle the issues that exist.

Sputnik: Democrats took control of the statehouse for the first time in two decades on promises to tighten gun regulations. Why are the Democrats pushing this agenda and how are the people of Virginia reacting to this?

Tina Ramirez: The Democrats in Virginia have been pushing legislation to take away the Second Amendment. This is nothing new. And all of the provisions in the legislation that they're pushing would essentially dismantle the Second Amendment and they think that the government knows best, they think that they know best. And the reality is that there are a lot of law-abiding citizens across Virginia, they’re Democrat, Republican, they're independent, they're voters, they're nonvoters that strongly disagree with them. I think it's interesting to point out that none of these specific laws was presented when the Democrats were running for office. They never presented specifics on all the types legislation they were going to do until after they won the election and had the voters been presented that information, the election would have gone very differently.

Sputnik: And how will this issue influence the upcoming elections, in your view?

Tina Ramirez: There is a renewed focus on registering to vote across the state of Virginia since this occurred. And I can assure you that in one county in particular that I was working in, there were 10 young men who had never voted before – they said they were going to go out and vote because they realized that they had taken it for granted in the past and that they couldn't anymore. That's a tenfold increase in voter registration. And I think that we see that across the state of Virginia. There are a lot of hunters across the state of Virginia. Our biggest economy is agriculture. There are a lot of people that use guns for sport and for games. And Virginia is not New York City. These are people that are not political one way or another. That's just the culture of Virginia and it's going to be very hard for the governor to take away the rights of gun owners across the state, including against his own police officers, which is one more thing he's tried to do.

Sputnik: How will this influence other swing states and what would be the public’s perception? Which side may the states lean in this case?

Tina Ramirez: This is not just a Virginia issue. This is a national issue. What we see happening here is something the Democrats have been talking about for a long time and now it’s brought out completely in play. Everything that conservative gun owners have feared for very long - we see that it was real. That we had we had a legitimate concern. And now we've seen seeing that come out full force. They've played their hand and essentially what they want to do is dismantle the right of law-abiding American citizens to protect themselves and their families. And that is something that Americans across the country are very concerned about. And I think you see that across the country with the amount, just with the response.