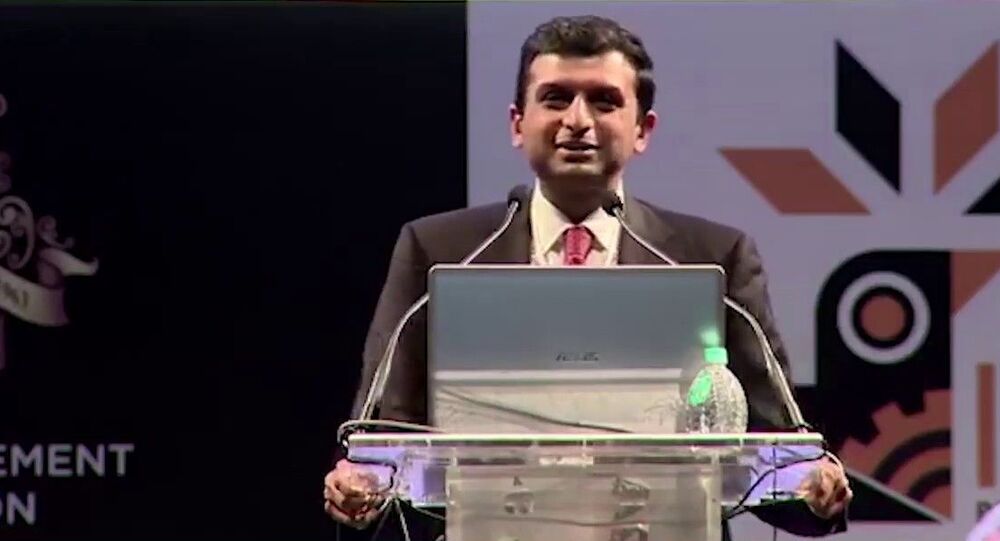 New Delhi (Sputnik): Indian Finance Minister Nirmala Sitharaman will table her second national budget in Parliament on 1 February. From the 7 per cent Gross Domestic Product (GDP) projected in her first budget last year, India’s actual growth has crashed to 4.5 per cent. Coupled with rising inflation, it’s a grave challenge for the Indian economy.

The Indian industry association, Assocham's Senior Vice President Vineet Agarwal, contends that unless demand is revived, the industry will not be able to plan investments, despite the major corporate tax relief that the sector received last September.

In an interview with Sputnik, Agarwal touched upon various related subjects while also deliberating on how a reduction in taxes can boost the economy and revive growth.

Sputnik: Ahead of India's Union Budget on 1 February, what suggestions have been given by Assocham during consultations with the Finance Ministry?

Vineet Aggarwal: We have proposed a reduction of about 25 per cent in Goods and Service Tax (GST) across sectors to improve demand. For example, the GST [Goods and Services Tax] on scooters and motorcycles is currently 28 per cent. If we have to push the demand for two-wheelers, a GST rate cut will be of much help. Apart from this, there are many other sectors which will witness an increase in demand if the GST rate is reduced for them.

Vineet Aggarwal: We would definitely like to see the personal income tax rationalised the way corporate tax rates have been reduced. The reduction of personal income taxes will improve demand in the country. Relief in the lower tax brackets will definitely benefit a lot of people, as many taxpayers belong to that category. They will, in turn, have more dispensable income in their hands, which will have a positive impact on consumption.

Sputnik: Prime Minister Narendra Modi has announced a goal of achieving a $5 trillion economy by 2025. What should the top three priorities be to achieve that vision?

Vineet Aggarwal: Top priorities are clearly dependent upon how we grow the economy. Growth of the economy is dependent on an increase in demand, consumption and investment. All these factors are connected to each other. If the demand is not there, we cannot make new investments. There is an urgent need to spur demand. We have addressed a lot of issues from the supply side, but more needs to be done on the demand side.

Sputnik: It is clear that the Indian consumer is not spending. What, in your opinion, is the reason for this?

Vineet Agarwal: Today, Indians are very value-conscious. Growth in the e-commerce segments in still very decent because they offer discounts and value. Overall value consciousness has also been seen by the corporate sector to spur demand. Of course, domestic demand is only one aspect, and we also need to look at export competitiveness. One has to tap the global market as well. Export competitiveness can help India.

Sputnik: That said, demand hasn't picked up, even after the government reduced corporate tax rates. Do you think it was a counterproductive step?

Vineet Agarwal: No, because the impact of such initiatives comes only in the long term. To expect that investments will immediately start with corporate tax rate cuts is not fair. We have to give it some time. The positive things that have been achieved with the corporate tax rate cut are that we are at par now with global countries in terms of income tax rates.

Especially in the case of manufacturing, wherein new firms are now allowed to pay even lower tax rates. India itself is a big market. The corporate tax rate cut will prompt a lot of global companies to set up shop in India. Clearly, the impact cannot come overnight.

Sputnik: India is facing the worst ever job scenario. Job creation is at a 45-year low as per estimates. How can the budget, as a key government policy statement help reverse this?

Vineet Agarwal: Jobs are again connected with demand and investments. Jobs have, in fact, grown in the service sectors. Food delivery apps or e-tailers have added to their employee bases. Job creation is part of the economic cycle. The key is to focus on demand growth. The moment demand starts picking up; additional jobs won't be far away.

Sputnik: The US-China trade deal has been finalised. What benefits can India draw from it?

Vineet Agarwal: Broadly speaking, the US-China trade war prompted companies to move out of China as additional tariffs were put on exports to the US. Companies have started looking for alternative manufacturing bases. I think that the process will continue as more stabilisation is needed on US-China trade ties.