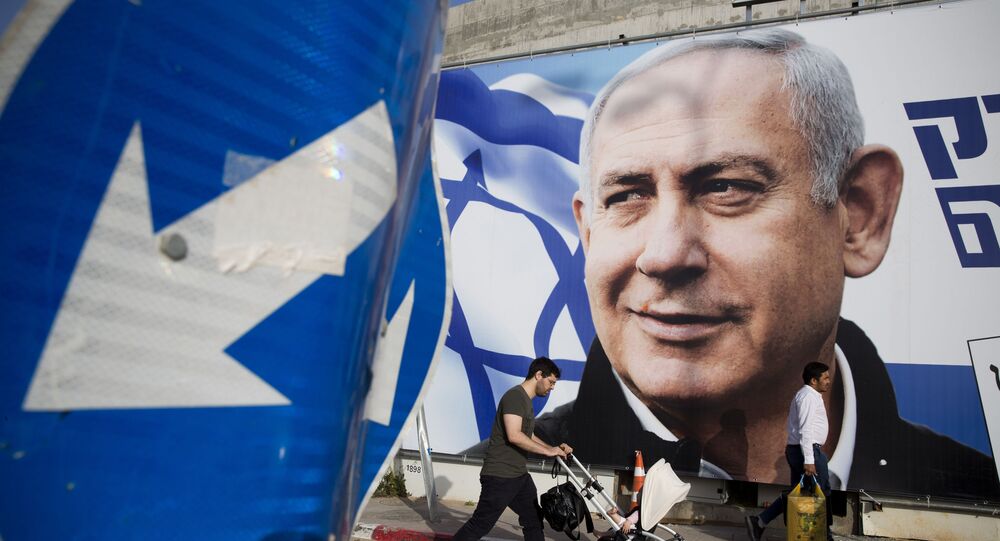 Israeli Prime Minister Benjamin Netanyahu's new election bid is hanging in the balance as Kahol Lavan and Yisrael Beiteinu are pushing ahead with convening a panel to decide the fate of the prime minister's immunity request. Israeli observers have outlined possible scenarios of how things may play out for Netanyahu.

The same day, the leaderships of Likud, Agudat Yisrael, Degel Hatorah, Shas, New Right, National Union, and Bayit Yehudi wrote a letter to Edelstein, urging him to prevent the plenum from convening before the 2 March election.

On 13 January, members of the Knesset Arrangements Committee voted 16 to 5 in favour of establishing a House Committee, citing Knesset adviser Eyal Yinon's legal opinion permitting the formation of the body despite parliament being out of session. If the committee rejects Netanyahu's effort to obtain immunity, which is obviously the case, a door to the trial would be open.

Knesset Speaker Edelstein is on the Horns of Dilemma

"Barring miracles, Netanyahu will be most likely put on trial", suggests Israeli blogger Yuri Moor. "About 15 years ago, Knesset members (MKs) abruptly changed the law on their status. Previously, immunity was automatically assigned to each MK, and in the case of very serious charges, the head of the prosecutor's office asked parliament to deprive the accused of immunity. And for 15 years now, the reverse order has existed: now the parliamentarian does not have automatic immunity and the head of the prosecutor's office (attorney general who is the legal adviser to the government) announces his intention to bring the lawmaker into court".

The blogger explains that in accordance with the present rules, the accused has a month – "this is important in our case" – to ask his colleagues for protection. If he does not, or if the parliament refuses to defend him, he will be put on trial, Moor underscores.

He doubts that Knesset Speaker Yuli Edelstein could interfere with lawmakers' efforts to debate the immunity request ahead of the 2 March elections. "Edelstein has found himself between a rock and a hard place", Moor observes.

"Although Netanyahu's supporters constitute a minority in parliament, the Knesset speaker could prevent the convening of a plenary meeting on the immunity request, citing the fact that [the country] is on the threshold of elections. But he is unlikely to do this", he presumes.

According to the blogger, Edelstein "does not conceal his ambitious plans to run for [the] president’s honorary post in a year and a half"; therefore, the Knesset speaker is likely to tread carefully to avoid a media storm. The Israeli press is openly attacking the prime minister and may hinder Edelstein's ambitious plans if the speaker stretches a hand to Netanyahu. On the other hand, by selling the prime minister down the river, Edelstein risks losing support from Likud and the right-wing camp in general, the blogger points out.

© AFP 2021 / ERIC FEFERBERG
Israeli parliament (Knesset) speaker Yuli Edelstein gestures prior to attend a session of Questions to the government at the French National Assembly in Paris, on May 16, 2018

For her part, Nelly Gutina, an Israeli author and political commentator, believes that Edelstein could opt for a "third scenario".

The speaker can "drag out the discussion indefinitely, postpone the commission’s meetings, allow Likud MKs to speak endlessly, that is, to arrange nothing short of a filibuster", according to the author.

"Since the discussion of the commission on immunity is tantamount to a legal process, Netanyahu has the opportunity to bring witnesses in their defence", she continues. "In addition, he himself is a great speaker who can take the stage and be the star. The media, which for the most part does not conceal its anti-Netanyahu bias, will not be able to ignore his speeches because the meetings of this commission will be broadcast directly by a special Knesset channel".

While Kahol Lavan's Benny Gantz and Yisrael Beiteinu's Avigdor Lieberman are clearly trying to oust Netanyahu from the race ahead of the 2 March vote, the prime minister theoretically can take part in the elections even while being on trial, Moor remarks.

"But with a defendant at the helm, Likud risks losing many mandates", the blogger points out. "Likud's electorate would be aware that being a defendant, Netanyahu would certainly not be able to form a coalition while many [Israelis] would either refuse to go to the polls or would give their votes to other parties. Apparently, this is exactly what Gantz and Lieberman are betting on".

However, a "protest vote" in Netanyahu's favour may also take place, according to Moor: "Many believe that the prosecutor’s office is deliberately sinking the premier", he says. "And people can, in spite of the prosecutor's office decision, take the victim's side".

According to Gutina, "what is happening in Israeli politics looks like wrestling without rules". She presumes that the Israeli government is facing a "systemic crisis" while Israeli society is growing increasingly divided over the current developments.

"At the moment, the only barrier to the onset of a total collapse is the figure of the Israeli prime minister", she opines, adding that "irresponsible old elites" are shooting themselves in the foot by trying to unseat Netanyahu.