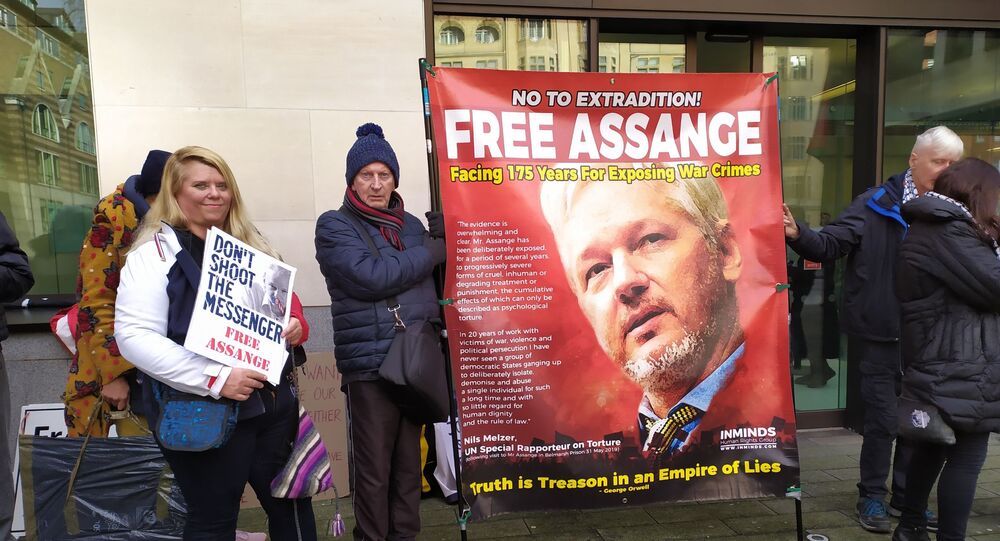 Julian Assange, now more than ever threatened with extradition to the United States, found himself once again before British magistrates on 13 January for a hearing. Sputnik discussed the issue with Aymeric Monville, the author and publisher of the book “Julian Assange in Danger of Death".

Sputnik: What is the latest news concerning the case of Julian Assange?

Aymeric Monville: "Routine hearing" is the correct term, despite the fact that the hearing was brought forward by one day. Routine has formed. According to friends of the WikiJustice committee who were present at the hearing, the defence of Julian Assange is becoming increasingly inaudible. We expected a request for release and it didn’t happen. At the hearing, the defence, for the most part, requested to have more time with their client.

All this is very small compared to all that should have been done. Where are the requests to release him for health reasons? Where is the claim for political prisoner status? Where are the complaints of torture? Let me remind you that even the UN inspector, in the person of Nils Melzer, asked that light be shed on this last point. Moreover, his sentence for breaching the terms of his parole has expired and he is still imprisoned only because he risks being extradited to the United States.

Sputnik: You are concerned about the effectiveness of Julian Assange’s defence…

Aymeric Monville: We are starting to wonder about his lawyers and their relationships… American journalist Lucy Komisar recently published an article highlighting the fact that some of Julian Assange’s lawyers work for firms that have already worked for the US government and sometimes were engaged in cases of extradition…

We see that Julian Assange’s defence devotes much time to negotiate with the English justice, which is not necessarily bad in itself. But that raises a lot of questions. Besides, at the hearing on 13 January, it was clear that Assange’s lawyer annoyed him. There have been several scandals in the Assange case: the first concerns his arrest, the second is about the media silence and the third is the inaudibility of his defence. I don’t accuse them of collusion.

Negotiation is a strategy. But then you have to negotiate essentially: the physical and moral integrity of the client. This is not the case here.

Just look at the previous hearings, where Julian Assange demonstrated signs of exhaustion. On several occasions, he could hardly pronounce his identity or his date of birth, not to mention concentration problems. Last November, 60 doctors warned of Julian’s condition, saying they were afraid he might die in prison. Not to mention the fears of the UN. Whether it is physical or psychological torture, it remains torture as defined by the United Nations.

If they get nothing and the whole thing ends badly, the question will be asked: “What do we do with his lawyers?” On 13 December, a British judge asked Gareth Peirce, one of Assange’s lawyers, if she wanted her client to appear in person at the Court on 19 December. She said no, knowing that it would have given her the opportunity to spend several hours alone with Julian Assange. It is incomprehensible… There are also questions regarding the environment of Julian Assange…

Aymeric Monville: Take the case of Renata Avila. She is a Guatemalan lawyer and activist who has been defending Julian Assange and WikiLeaks for years. She somewhat plays the role of his spokesperson. This lady heads the Foundation for Smart Citizenship, an organisation based in South America. This organisation is supported by the Open Society Foundation of George Soros, and also by the National Endowment for Democracy, which is an American organisation that's often accused of being a tool of American imperialism.

Sputnik: Newsweek journalist Tareq Haddad assured on Twitter that Julian Assange appeared to be in better shape than some reports might have feared. Is the WikiLeaks founder feeling better?

Aymeric Monville: According to my information, he appeared limping and didn’t seem to be in great shape. It is true that he looked a little more concentrated, but we are far from talking about a man who has all his faculties. Saying that Julian Assange is doing well would be a lie. I remind you that we have been accumulating alarming signs for several months. Even [former] British diplomat Craig Murray, who is known to have exposed torture by secret services – namely MI6, – was alarmed by the case of Julian Assange.

Sputnik: To what extent could Brexit affect the fate of Julian Assange?

Aymeric Monville: Would a UK regaining some sovereignty be good news for Julian? When we hear the statements of Boris Johnson, who justified the mass surveillance which cost the British billions of pounds, I start to wonder… Especially since I think that the United Kingdom is leaving Europe to strengthen its alliance with the United States. What is certain is the need to alert the public to Julian Assange’s case.

Sputnik: A hearing is scheduled for 24 February regarding Julian Assange’s possible extradition to the United States. We seem to be approaching the outcome of this affair… What has the WikiJustice committee planned to help Julian Assange?

© AP Photo / Moises Castillo
Mexican President Expresses 'Solidarity' With Julian Assange, Calls For Forgiveness
Aymeric Monville: We have just submitted a third request for release to the British authorities, as well as a medical report. And our role is also to educate the public because there is not much time left to act. We should shout out loud that Julian Assange is innocent, that the UN is asking for his release and that he is locked up for having done his job as a journalist.

We must do so because the mainstream media speak very little about it. Le Monde has hardly spoken about Assange since his arrest in April 2019. It is very symptomatic when it comes to the fate that awaits him.