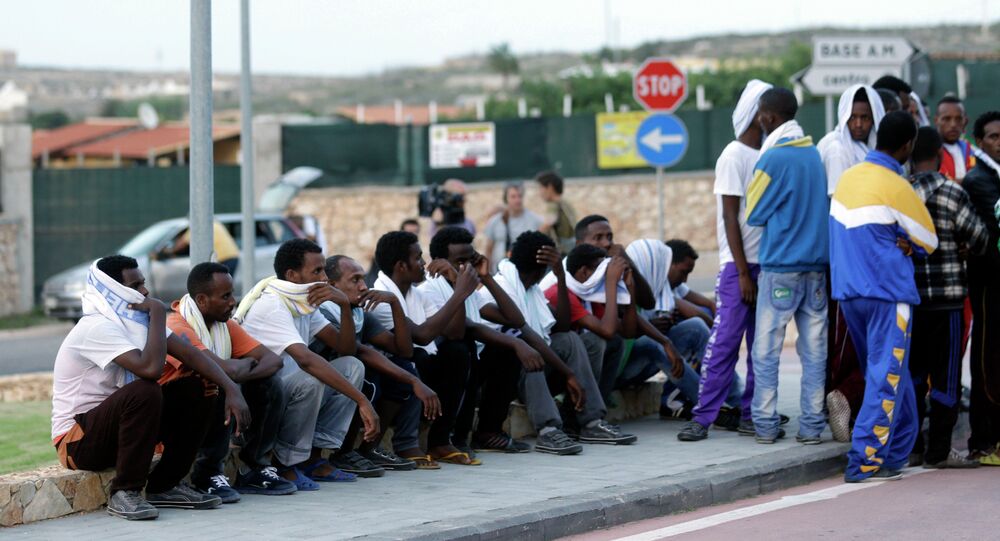 As migrants continue to flow en masse from crisis-stricken East Africa to the EU, the bloc has increasingly faced calls to get involved, either financially or by taking in refugees.

The New York Times reported that the EU spent about 20 million euros in Eritrea last year, on building a road to stop the flood of migration. The road, however, appears to have been constructed by forced conscripts.

The project was presumed to have been carefully designed to conceal the EU’s effort to fund work on the construction site.

According to Filmon Zerai, a blogger and commentator on the Horn of Africa, the EU has not done “enough in addressing the root cause of migration” brought about by external reasons and the “mismanagement of internal affairs by PFDJ [The People's Front for Democracy and Justice - Eritrea’s ruling party]” over the last 20 years, he says.

© REUTERS / Giorgos Moutafis
A rescue boat of the Spanish NGO Proactiva approaches an overcrowded wooden vessel with migrants from Eritrea, off the Libyan coast in Mediterranean Sea August 29, 2016

Calling for greater EU involvement in the region, the expert contends that Eritrea, devastated by 20 years of war with neighbouring Ethiopia, as well as the Horn of Africa at large “are quickly becoming a major geopolitical battleground”, citing its access to the crucial Red Sea passages.

Zerai brings up China’s policies [economic cooperation among Eritrea and China has been strengthened continuously since the two set up diplomatic ties in 1993] as an example:

“The EU can complement and follow China's successful strategy regionally by rearranging the current approach to developmental aid towards economic sectors and large scale infrastructure projects”.

“The EU’s development agenda is increasingly driven by security and migration concerns entirely and that itself is limiting its geopolitical opportunities”, the speaker summed up the current European priorities, as he sees them.

Zerai also pointed out that whatever the EU’s efforts outlined in a NYT article, “the criticism on the lack of genuine effort in building institutional mechanism is growing from Eritreans”. He went on to say that locals would prefer the EU to “do more with comprehensive funding packages to help with demobilisation & reforming the national service back to peacetime [after the war with Ethiopia]”.

Build Infrastructure, Not Take in Migrants

Michael Abraha, a journalist, lawyer, human rights advocate, and former US federal government employee, has pondered migration from the crisis-stricken region, suggesting that it comes as no shock.

“Tens of thousands have survived the hazardous journey and have made legal or illegal entry into Europe. Almost all have been granted asylum or have qualified for refugee status in many EU member countries considering the abuses suffered in their homeland”, he recounted.

He further goes on to ponder the EU’s main concerns with regard to policies in East Africa: first – the eye-watering costs of refugees’ assimilation on European soil, and second – by admitting Eritreans, the EU “condemns” the Eritrean government, while at the same time apparently seeking diplomatic ties with the “strategically located Red Sea state”, the commentator notes.

© CC BY 4.0 / Martin Schibbye / The Independence Day of Eritrea
Eritrea

Per Abraha, there is no threat faced by the “Eritrean strongman”, Isaias Afwerki – neither internal, nor external. Now that there is no “Ethiopian threat”, after a peace deal was signed with Nobel Peace Prize winning Ethiopian Premier Abiy Ahmed, the state of emergency decree “must be lifted” and forced conscription, which is reportedly used for building infrastructure – ditched, he says.

“The best way out is for the government to begin a demobilisation and rehabilitation programme for its conscripts. I am sure the EU and other Western countries will provide the necessary assistance to ensure that such a project is successful”, the commentator rounded off.