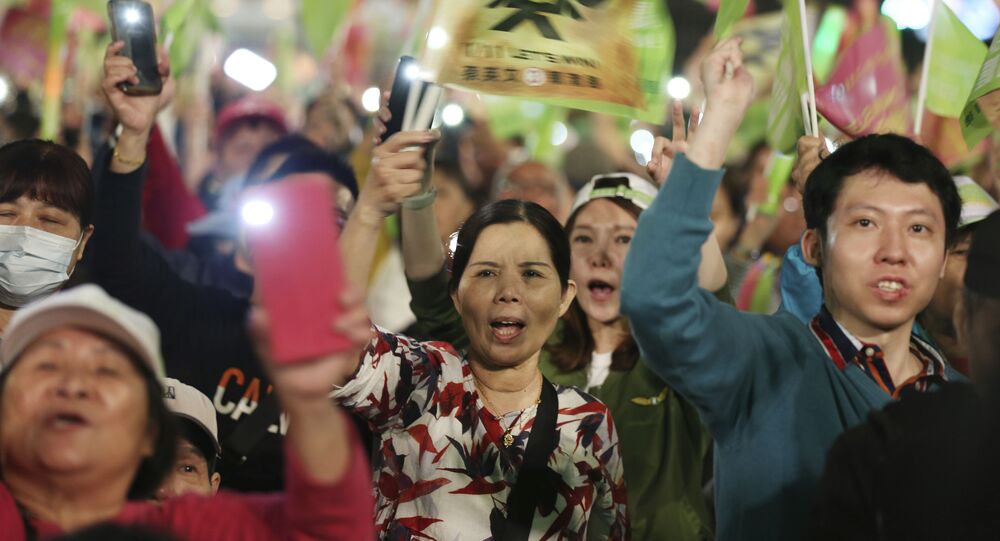 Taiwanese President Tsai Ing Wen, who is part of the pro-independence Democratic Progressive Party (DPP), is running for a second term and has strongly supported separating Taiwan from China by reducing the island’s economic dependence on the mainland. Tsai’s main opponent is Kaohsiung Mayor Han Kuo Yu of the pro-China Kuomintang (KMT), who has instead promised to strengthen relations with Beijing.

“A lot of energy out of the streets tonight,” Schlehuber, who is currently in Taiwan, told Loud & Clear host Brian Becker on Friday. The reporter had just left a

“Quite a bit of energy tonight, with many people thinking that President Tsai has the best chance of winning. Many people thought that the Legislative Council could switch back to the pan-Blue coalition, made up of Kuomintang, the long-time ruling party, but seemingly blunder after blunder by their nominee Han and their whole party list [has resulted in a] complete mess right now, where many people thought that you would have a split president and legislature, and now some people are predicting that both the legislature and presidency will remain with the pan-Green DPP party,” Schlehuber told Sputnik, noting that people don’t take Han “as a very serious candidate.

The “blunders” that Schlehuber referred to are a series of scandals Han has been involved in, including extramarital affairs, drinking and gambling.

According to Smolarek, Taiwan’s election is “really consequential” for world politics. China considers self-governing Taiwan part of its territory and claims sovereignty over it.

“At the conclusion of the Chinese Civil War in 1949, the defeated side fled to Taiwan. The formal name of Taiwan is the Republic of China, because they still claimed legitimacy … and the Chinese government as we understand it - that is, the government of the People's Republic of China based in Beijing - never recognized this as legitimate,” Smolarek said. The republic was formed in 1911-12, when the last Chinese emperor, Pu Yi, was overthrown.

“They never gave up their territorial claim to Taiwan, and they consider it to be part of the territory of China, an integral part,” Smolarek continued. “And because the Chinese revolution happened, the Chinese Communist Party formed a government essentially as an anti-colonial project in addition to a socialist project. They consider this to be of the utmost importance. Recovering all of China's lost and carved-up territory is fundamental to who they are as a political force.”

“The nationalist party, the Kuomintang, which is the main opposition party in Taiwan, that was the defeated side of the Chinese Civil War. They ruled the island for the first several decades of its existence as a de facto autonomous entity, but now there is this other political party in power called the Democratic Progressive Party. It’s part of a broader alliance, the pan-Green camp, that favors the complete separation of Taiwan from China, the declaration of Taiwan to be an independent entity, which is something completely unacceptable to the government of Beijing,” Smolarek told Sputnik.

Even though it adopted the “One China” policy in 1979, which acknowledges Beijing’s claim that Taiwan is an inseparable part of China, the US maintains close independent trade ties with Taiwan and remains its top supplier of weapons - if mostly outdated ones. In March 2018, US President Donald Trump signed new legislation allowing senior US officials to travel to the island to meet their Taiwanese counterparts and vice versa.

“The Trump administration’s orientation has been extremely provocative towards China, engaging in massive arms sales, including advanced fighter jets. At the very beginning of Trump’s presidency, Donald Trump accepted a call from President Tsai, apparently unaware that that would be considered by China to be a violation of the One China principle, the foundation for diplomatic relations between the US and China … there’s all sorts of different power plays, different factions and centers maneuvering on behalf of Taiwan independence forces. There are also military corporations, arms manufacturers making lots of money off of it,” Smolarek added.

As the South China Sea standoff remains ongoing and unsettled, Sino-American relations remain tense as well. The South China Sea contains many islands, reefs and shoals presently controlled and occupied by the People's Republic of China, but also claimed by several other nations, among them Vietnam, Taiwan, Cambodia, Brunei and the Philippines. Aside from the enormous amount of international sea trade that passes through the area, it is also believed to contain large amounts of as-yet unexplored oil and natural gas deposits.

3 Missing After Military Helicopter Crashes in Taiwan, Chief of General Staff Aboard - Report