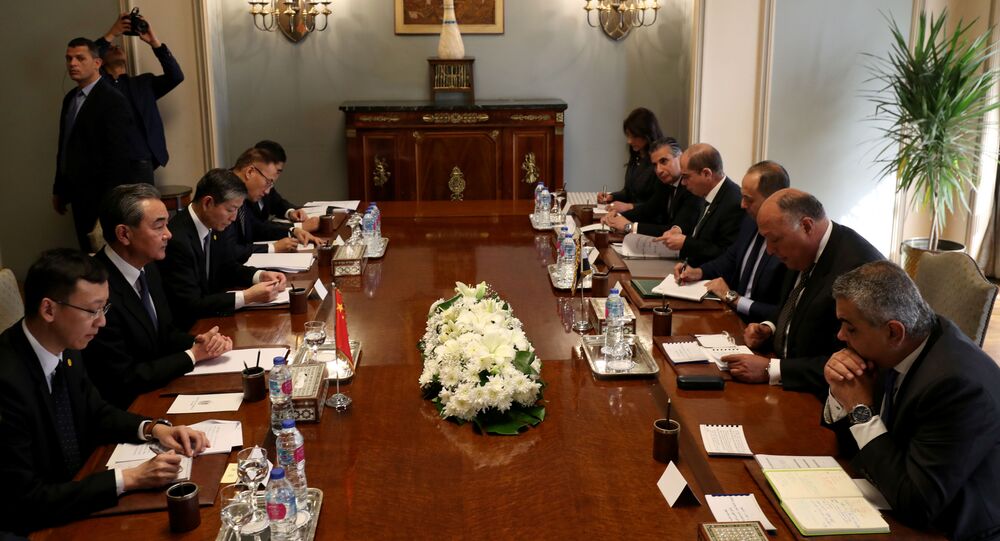 Egypt backed China's initiative to enhance cooperation and take the comprehensive strategic partnership to a higher level, expressing hope to be Beijing’s key partner in promoting the Belt and Road initiative as Chinese Foreign Minister Wang Yi visited the North African country for Sino-Egyptian talks, making it his first foreign trip in 2020.

During his meeting with Egyptian President Abdel Fattah el-Sisi in Cairo, Wang Yi called for taking the comprehensive strategic partnership to a higher level. The president of Egypt assured readiness to cooperate with China in this direction, noting that Egypt, being a strong supporter of the Belt and Road Initiative, hopes to become a key partner in promoting China’s initiative.

The Chinese minister, during talks with Abdel Fattah el-Sisi, called Egypt “a long-term trustworthy friend” of China, noting its strong support for Cairo's fight against the forces of terrorism and extremism. Wang Yi said that China was ready to deepen strategic coordination with Egypt to jointly maintain peace and stability in the Middle East.

The Egyptian president, for his part, welcomed China's position in world affairs, saying that Egypt expects China to play a more active role in overcoming the current instability in the Middle East. El-Sisi assured of his interest in enhancing exchanges with China in combating terrorism and extremism.

The United States and its Western allies are increasing pressure on China, interpreting China’s efforts to de-radicalise the situation in Xinjiang as a violation of the rights of the local Muslim population. In this context, Cairo's intention to strengthen cooperation with Beijing in combating terrorism and extremism – particularly, China is facing these challenges to its security in Xinjiang – can be seen as support for Beijing from the largest country in the Arab world.

At the concluding press conference in Cairo, Wang Yi noted that China could benefit from the counter-terrorism experience of Egypt, Saudi Arabia, and the United Arab Emirates. The minister also warned against groundless attempts by some Western powers to use lies against Beijing to drive a wedge in China's relations with the Muslim world.

Egypt fully recognises and supports China's policy in Xinjiang, said Zhou Rong, a senior research fellow at the Chongyang Institute for Financial Studies at the Renmin University of China, commenting on the visit of the Chinese foreign minister to Cairo:

“Chinese Foreign Minister Wang Yi made his first foreign visit to Egypt at the beginning of the third decade of the 21st century. This reflects the attention and confidence of Chinese leaders and Chinese people in Egypt. The Egyptian media are among those regional media that have the highest regard for China's reforms and openness, as well as for Xinjiang's stability policy”, the expert said.

“The Egyptian government fully understands and respects China's policy in the region and appreciates Xinjiang's achievements in reform, openness and integrated management. China's support, China's policy in Xinjiang undoubtedly has a favourable social basis in Egypt. However, Egypt is a major and influential country in the Middle East and Africa”, Zhou Rong noted.

Clarifying China's policy in the Xinjiang Uygur Autonomous Region, the expert noted the statement of the Chinese foreign minister on commitment to the inadmissibility of interference in the internal affairs of sovereign states:

“Foreign Minister Wang Yi has declared to the world by his statement in Egypt that China will never allow any country to interfere in the affairs of Xinjiang, to interfere in China's domestic policy. The minister's statements were highly appreciated and fully supported in Egyptian public circles”, he concluded.