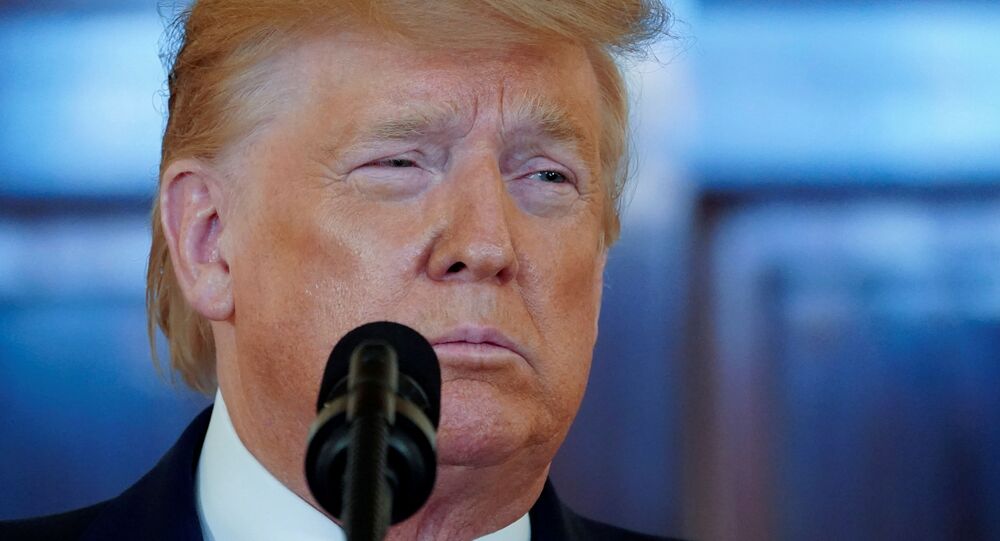 In his address to the nation after the attack on the US military in Iraq by Iranian forces, President Trump did not announce any retaliatory military action against Tehran, but instead suggested reaching a new nuclear deal with the nation that would make "the world a safer and more peaceful place".

This has given rise to questions about what effect the apparent de-escalation with Iran have on the ongoing impeachment process launched by House Democrats against the US president.

Dr Rubrick Biegon, a lecturer in international relations at the School of Politics and International Relations of the University of Kent, has shared his views on the matter.

"Trump's apparent decision to deescalate military tensions with Iran is unlikely to have a significant bearing on the impeachment process. Of course, a heightened, protracted conflict with Iran would have dominated the news cycle and potentially limited the ability of the Democrats to push forward with impeachment", Dr Biegon said.

Still, Democrats will link the Iran crisis to the president's erratic leadership, the scholar believes. He thinks that in terms of the primary contest, the Iran episode has brought foreign policy to the fore, while also reminding voters of divisions within the party that date back to the Iraq war of 2003.

"It isn't clear at the moment if any one candidate stands to benefit from the political fallout from Soleimani's assassination, Iran's retaliatory attack, and the subsequent if tenuous de-escalation of tensions between Washington and Tehran", Dr Biegon said.

Because Trump has attempted to draw a line under this particular crisis with his speech, the escalation of tensions with Iran will most likely subside as an election issue, the scholar noted.

According to Dr Biegun, the public doesn't have a great deal of confidence in Trump's capacity to handle an international crisis, as compared to previous presidents. Absent a dramatic turn of events, Trump is unlikely to benefit from a "rally round the flag effect", the scholar said.

The highly-polarised nature of American politics under Trump means that even a serious confrontation with an established adversary is unlikely to move public opinion, particularly when the crisis is widely seen to be one of Trump's making, Dr Biegun noted.

Dr Beigun pointed to polls that show that the American public remains, on the whole, fairly skeptical of deeper involvement in the Middle East - a trend that has been persistent for several election cycles. Therefore, the scholar said, Trump benefited somewhat from perceptions that he was an anti-interventionist in 2016, as it helped distinguish him from the rest of the Republican field.

Although Republican officials now largely support Trump's foreign policy, elements of his base may have been reluctant to get behind another conflict in the Middle East. This was symbolised by criticism of Trump’s Iran policy by FOX host Tucker Carlson, one of Trump's most influential supporters, the scholar concluded.

An impeachment inquiry was launched by House Democrats against President Trump in September over a whistle-blower complaint about the alleged "quid-pro-quo deal" between Trump and his Ukranian counterpart Volodymyr Zelensky. The so-called whistleblower alleged that in the 25 July phone call Trump "exerted pressure" on Zelensky to investigate into potential corrupt dealings involving former Vice President Joe Biden and his son in Ukraine.

Trump released the memo of his conversation with Zelensky and dismissed the accusations as another "witch-hunt" and a "con game" by Democrats to boost their 2020 presidential bid.

On early Wednesday, American military facilities in Irbil and the al-Assad Air Base became targets of Iran's Islamic Revolutionary Guard Corps, as "revenge" for Iranian top military commander Qasem Soleimani, who was killed in the US targeted attack on 3 January. No US personnel was killed in the attack, Washington said.

Addressing the nation, President Trump did not announce any retaliatory military action against Tehran.