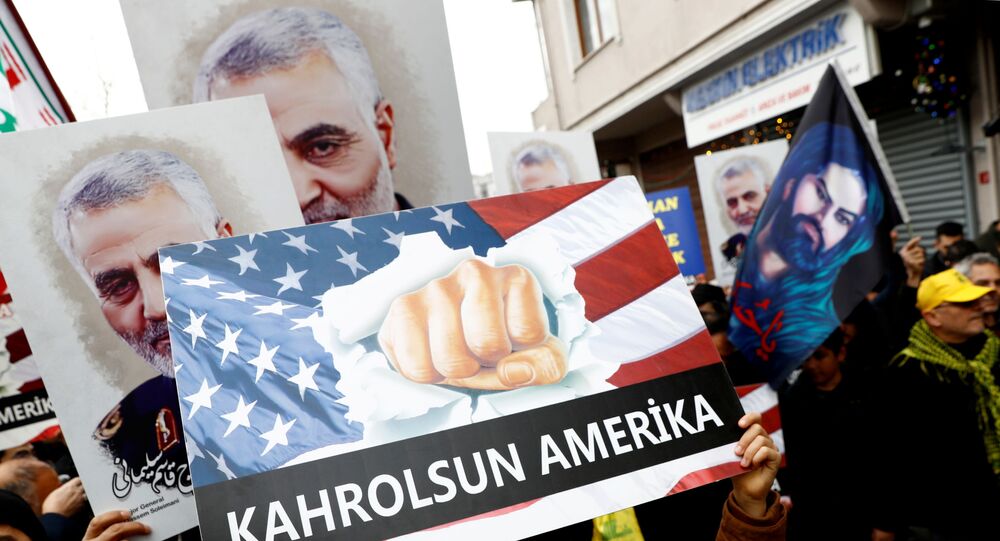 The US has issued a warning to ships sailing through the waterways of the Middle East, saying there is "a possibility of Iranian action against US maritime interests in the region."

Sputnik spoke with Shahram Akbarzadeh, a specialist in Middle Eastern politics at Deakin University to get his views on the matter.

Sputnik: Today the Iranian Parliament has voted to designate the US army and Pentagon as ‘terrorist entities'. What does the decision mean strategically?

Shahram Akbarzadeh: It’s really a symbolic move, just as the United States has labelled the Iranian Revolutionary Guard Corps as a terrorist organisation. Iranians can say, well, we can just do as much and do the same and call the US Army as a terrorist.

Sputnik: Earlier, Iran announced that it was discontinuing its remaining obligations under the nuclear deal. What steps do you expect from the EU in these circumstances?

Shahram Akbarzadeh: Iran has always been saying that it will withdraw gradually from the nuclear deal after the United States withdrew completely. So Iran has been doing a gradual step back from the deal. But the killing of Qassem Soleimani has really expedited that process.

There's really no sense for Iran to be part of the deal when Iran is complying with its compliance, with its obligations, but not receiving any of the benefits that a deal is supposed to provide because of the US sanctions on it. Iran is hoping that Europe can come to the party. Iran is hoping that Europe, Russia, China can somehow find a way to circumnavigate US sanctions.

But that's really wishful thinking. Europeans are in no position to put up an alternative to the United States. The Europeans are too concerned about the loss of business and their industries and their companies because of the other sanctions that the US would put on them if they violate US sanctions. So this is a lost cause.

Sputnik: On Monday the Iraqi parliament vowed to end the foreign military presence in the country. How viable is that foreign troops will be withdrawn, at least partly, from Iraq? How can the domestic situation in the country change in case of withdrawal?

Shahram Akbarzadeh: The parliamentary resolution in Iraq is non-binding. It's the recommendation. The government of Iraq is a caretaker government. So we don't really have anyone with authority to enforce a US withdrawal from Iraq. One of the reasons for Iraqis to ask for the US withdrawal, of course, they're upset that Iraqi sovereignty was violated, but they're even more concerned that Iraq will become the theatre of conflict between Iran and the United States. It will become a theatre of a proxy conflict that would be devastating for Iraq.

It will tear Iraqi society apart. So it is better for Iraqis to have the US withdrawal from Iraq and avoid being caught in the middle. My assessment is that the US, even though Trump promised to bring back more US troops from Iraq. In reality, Trump is sending more troops to Iraq. And given that the US sees withdrawal from Iraq as a sign of weakness, as a sign of giving in to Iran pressure, the US will actually increase its commitment to Iraq.

Sputnik: How do you expect the situation to develop in the near future in the region? What steps can we expect from Washington, from Iran and other countries?

© AFP 2021 / ATTA KENARE
Live Updates: US Preparing for Possible Iran Response After Soleimani Murder as Quds Leader Buried
Shahram Akbarzadeh: In the immediate future, I think we will see more clashes in Iraq between Shia groups, the popular mobilisation units that are aligned with Iran and the United States. We have seen Katyusha attacks against the US embassy in Baghdad, and that is likely to antagonise the US even more. I don't think Iranians will act, hitting back against the US, because they know they can not confront the US in a conventional conflict, confessional battle.

And you could say - this is I'm speculating here - you could say that Trump ordered the killing of Soleimani, knowing full will that Iran doesn't have the capacity to get back at the US, but hoping that by provoking Iran to this extent, by killing a serving officer of the Iranian armed forces, it will provoke Iran to some kind of retaliation and give an opportunity and the excuse for the US to go in and enact regime change in Iran.