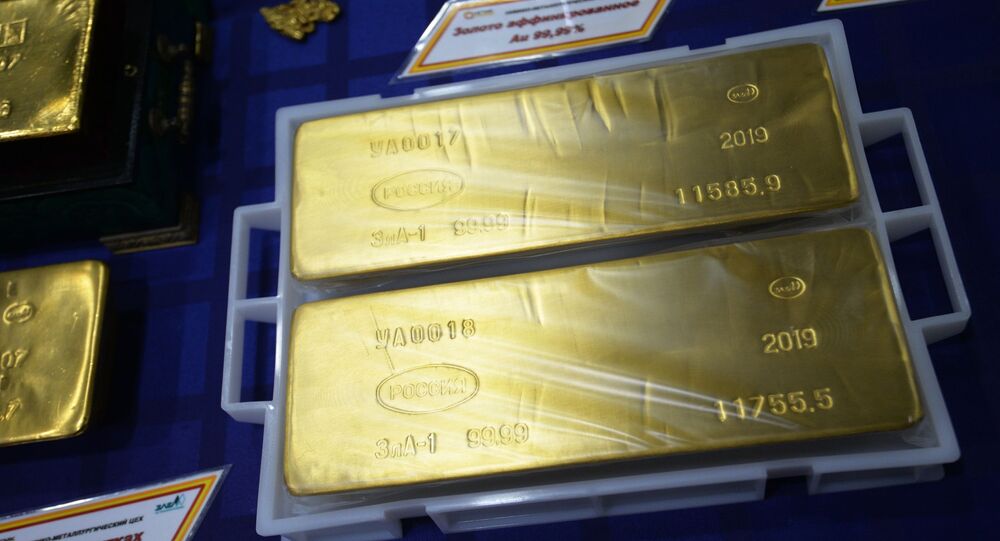 Gold has been ticking higher since late May 2019, driven by recessionary indicators, economic volatility and scares within the overnight lending market, says American economic analyst Pye Ian, a private equity executive and former precious metals commodities trader. He explains how the price of the yellow metal could go beyond $5,000/troy oz.

Major Eurasian nations, including Russia, China and India are boosting the yellow metal's positions by acquiring and producing bullion. In late December, Russian Finance Minister Anton Siluanov said that Moscow could consider investing part of its National Wealth Fund in gold. Being worth $124 billion as of 1 December 2019 Russia's National Wealth Fund amasses revenues from the country's crude oil exports.

Sputnik: What factors are behind the yellow metal's steady rise, in your opinion? Will the trend continue in 2020 and can we expect the gold price to break the $1,530 ceiling?

Pye Ian: The standardised answers to why gold’s “price” rises in general, let alone it’s recent spikes, include investor nervousness over the wider state of the economy, inflation or deflation, volatility and uncertainty in equities and bond markets, the weakening of confidence in fiat currencies or rising threats of conflicts or outright war.

​Since recessionary indicators returned last year – ranging from the 10-year Treasury yield falling below the 3-month yield, to factory orders dropping, to continuing retail closures – gold’s price started consistently ticking higher from around late May 2019. Said factors, coupled with scares within the overnight lending market, where the US Fed has been forced to essentially reprise its past Quantitative Easing program by injecting hundreds of billions of dollars into repo lending because at least one major financial institution is broken or insolvent, have kept gold’s “price” above $1,450/oz. and rising.

Yet in all honestly, the core reason why I listed gold’s “price” in quotation marks is that the economic fundamentals between the US Dollar as global reserve currency and finite gold bullion would dictate that gold’s genuine value should be well north of $5,000/troy oz. This is due to the sheer size of public and private debts the US faces, the volume of actual dollars in the system (cash or digitally), as well as the aggressive manner in which “money” is being printed out of thin air to further bail out speculative misadventures in dark pool finance.

The “prices” of gold and its close monetary cousin silver hint at two of the most politicized and thus poorly misunderstood aspects within global finance.  Said prices are tactically suppressed in order to lend credence to, and confidence in, fiat reserve currencies while also calibrating interest rate setting mechanisms. Thus, a $5,000 gold price, or a $100 silver price, would spook global markets, wreak havoc on interest rates, trigger bond dumping en masse, and other horror shows for western central banks.  It’d also strip the globe fairly immediately of actual physical gold and silver bullion.

I was trading precious metals back in 2011 when gold’s price reached an unprecedented high just shy of $1900/oz before then being aggressively taken down. The same with silver reaching nearly $50/oz before its most serious correction in decades, almost like their price movements were being manipulated by a kid with an old video game joystick. So why did said “prices” reach those much higher values 9 years ago, and at the paces they did, while silver’s oddly capped at under $20/oz and gold’s merely ‘allowed’ to creep gradually higher?

The answers have to do with modern mechanisms for gold price fixing out of London, the need to ‘curate’ perceptions of the dollar while lightly acknowledging rising risks & volatility across markets, and yet also allow prices to rise just enough to presumably slow the ongoing hoarding of physical bullion by Eastern central banks and players (who may be awaiting price dips in order to purchase further).

So to answer your “pricing trends” question, yes, intuitively, one could expect gold and silver prices to continue to rise, with the gold to silver ratio ideally moving toward 17 to 20, which would reflect the actual ratio of available gold to silver in the earth’s crust. Yet – again - it’s not a genuinely free global marketplace for precious metals, run on pure supply & demand.

Hence the only thing I would bet on is the reality of both metals prices being vastly undervalued in dollars. Especially as the probabilities for global conflicts rise alongside those for another fiscal transatlantic meltdown a la 12 years ago.

Sputnik: Russia continues to accumulate gold at steady pace, having produced more than 185.1 tons of the precious yellow metal from January to July this year and having acquired nearly 150 tons in January-November this year. In late December, Finance Minister Anton Siluanov dropped the hint that Russia could consider investing part of its National Wealth Fund in gold. Though Siluanov's words have yet to translate into actions, CNBC argues that the statement has given a further boost to gold prices. What's your take on Russia's "gold rush" and drift away from the dollar to the yellow metal?

Pye Ian: For a few years now, Russia, China and other sovereign Eurasian and southern hemispheric players have shifted economic strategies and priorities toward re-embracing gold as money, just as gold had been for millennia prior. The closing of the gold redemption window by US President Richard Nixon nearly five decades ago has led to currency values being followed either by faith or coercion.

The US dollar, having gradually plummeted in value for over a century now since the founding of the opaquely owned Federal Reserve System, has over the past two decades alone endured quite a bit of experimental stimulus measures and unprecedented conjuring in order to fund further military adventurism while endless debts and deficits within the US exacerbate without any checks or balances.

The dollar’s reserve currency and petrodollar standard roles also afford Washington and London the luxuries of inflicting sanctions, embargoes, currency wars, trade tariffs and other acts of economic warfare against nations deemed unpopular to the Washington consensus, be they Russia, Iran, Venezuela, China, Turkey, and as of late, even EU allies of the US for daring to practice economic sovereignty via the Nord Stream 2 gas pipeline deal with Russia.

What makes petrodollar hegemony and the dollar’s general reserve standard roles operational include the need for foreign nations to buy and hold US Treasury bonds in their monetary reserves. Nations such as Russia are thus expected to hold US bonds while enduring sanctions and an eastwardly expanding NATO, while America’s largest trading partner – China – is expected to do the same while being hit with trade tariffs and other measures meant to somehow slow China’s unprecedented economic rise.

Because holding US Treasury paper under such scenarios, coupled with the fact that gold remains the definitively finite global numeraire and Tier 1 banking asset, said Eurasian partners have been shifting out of western bonds and into hard assets such as gold. The fact that gold’s anchoring monetary role would also serve a unique position vis-à-vis the pricing and trading of other valuable commodities such as oil and natural gas has provided further incentives to up the ante on national gold reserves.

Taking from both points, then, Moscow’s shifting of state assets from US debt into gold for its National Wealth Fund involves more than just a defensive monetary manoeuvre; it’s effectively an offensive strike in an ongoing global currency war against domineering, punitive Anglo-American finance, which does not tolerate competition. Shifting more gold into a prominent sovereign wealth fund is, in part, calling the dollar’s bluff while signalling the need for interdependency between national currencies, gold bullion (rather than paper versions of gold, mining equities, ETFs or the like) and fossil fuel energy resources. It is indirectly reintroducing the abandoned Gold Standard, albeit based upon the strength of Russia’s vast natural gas, oil and other natural resources.

Because of China’s symbiotic economic and geopolitical relationship with Russia, said reintroduced standard is also reliant upon the former’s unmatched manufacturing and productivity prowess, especially as both nations seek to eventually shift demand reliance increasingly inward and toward their Eurasian, European and southern hemispheric partners.

Physical gold cannot be printed out of thin air. Neither can oil, natural gas, nor a well-trained, educated labour force.