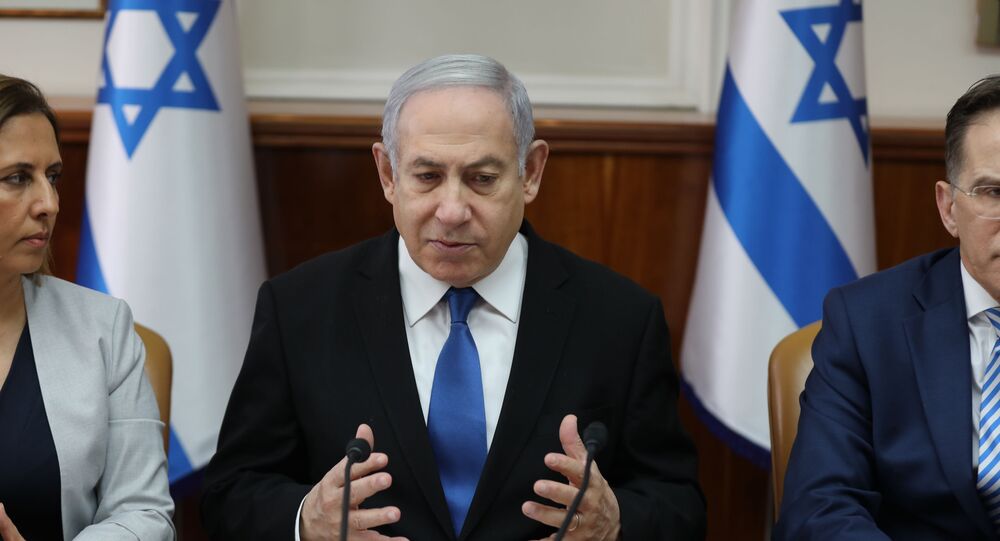 Immunity: Netanyahu Likely to Run in 2020 Elections, But Chances to Form New Gov't are Slim – Prof

Whether or not Benjamin Netanyahu is granted procedural immunity by the outgoing Knesset, his trial is likely to be postponed for months, giving him an opportunity to take part in the 2020 race, say Israeli academics, adding that his participation in the March vote does not mean he will manage to form the next government.

On 1 January, Israeli Prime Minister Benjamin Netanyahu announced that he had requested Knesset Speaker Yuli Edelstein to grant him immunity from prosecution in three criminal cases, including breach of trust, accepting bribes, and fraud, which he was officially indicted for on 21 November 2019.

Following the announcement, Kahol Lavan's Benny Gantz, Netanyahu's major political rival, accused the prime minister of evading justice. For his part, Netanyahu denies the allegations arguing that the immunity he requested only lasts for the term of the Knesset that granted it, while the country is bracing for new snap general elections scheduled for 2 March 2020.

Suzie Navot, an Israeli professor of constitutional law at the Stricks Law School in Rishon Lezion, explains that if Netanyahu is granted immunity, criminal proceedings will be suspended until the end of the Knesset term. She notes that this arrangement is based on an amendment to the Immunity law passed 15 years ago, adding that no Knesset member (MK) has been granted immunity since the law was amended.

"Such immunity applies mainly to expressions of opinion, votes, and activities that are essential to the performance of the MK’s duties", she elaborates.

According to the Israeli professor, there are four legal grounds for granting procedural immunity:

·         The indictment has been formed not in good faith or is discriminating against the MK.

·         The Knesset has already conducted its own disciplinary proceedings against the MK, and there is no public interest in a trial against him.

·         Criminal proceedings would cause serious damage to the Knesset’s work or to the representation of the people, "and, in light of the 'gravity, substance, and circumstances of the alleged offense', the public interest would not be harmed if no trial were to take place", she highlights.

Having requested procedural immunity, the Israeli prime minister mentioned the first, the second, and the fourth ground, insisting that law enforcement authorities acted in bad faith.

"The procedural immunity is granted by the House Committee and then by the Knesset Plenum", Navot emphasises. "Nowadays, with elections due in two months, the Knesset is an 'outgoing' Knesset and there is no House Committee. Nevertheless, there is no legal ban on establishing this Committee even now, if a majority on the Knesset Arrangements Committee decides to do so. If a House Committee is not formed, the request by Mr Netanyahu will not be discussed for weeks or months after the March 2020 election, meaning until a new government can be formed. Court proceedings against Mr Netanyahu would be frozen until then".

Still, she believes that "it would be very hard to prove that law enforcement authorities acted in bad faith in the Netanyahu cases".

'March Elections Will Mark the End of the Netanyahu Era'

The chance of the Knesset Committee preventing Netanyahu from running in the coming elections is slim, opines Professor Yoram Meital, an expert on Middle Eastern affairs at Ben-Gurion University.

The Knesset is not expected to form a new House Committee in the near future and thus the debate over immunity can be delayed for months, as Haaretz highlighted on Wednesday.

Though the prime minister has seemingly managed to postpone the trial, Meital believes that the March vote may spell doom for his political career.

"In my estimation, Netanyahu will run in the next election, but his chance of gaining a majority and forming a coalition government is slimmer than it was in the last election", the professor foresees. "It is unlikely that political rivals, first among them, Avigdor Lieberman, will cooperate with the Likud as long as Netanyahu leads this party. In other words, the next election could shake to the bottom the Israeli political sphere — most likely, it will mark the end of the Netanyahu era".

Nevertheless, the prime minister's possible failure cannot guarantee that Israel will be rescued from the ongoing political crisis, which can backfire on the status of the Israeli legal system, "as a result of Netanyahu's incitement against it", according to the Middle East affairs expert.

As The Jerusalem Post reported on 2 January, the Knesset Arrangements Committee will meet next week to consider forming a temporary House Committee to review the request. Meanwhile, Avigdor Lieberman, the leader of Yisrael Beiteinu (Israel Our Home), signalled that he and his party would oppose granting Netanyahu immunity. Likewise, Benny Gantz called upon MKs and Likud ministers to resist the prime minister's decision, pledging to amend the immunity law if his party forms the next government.