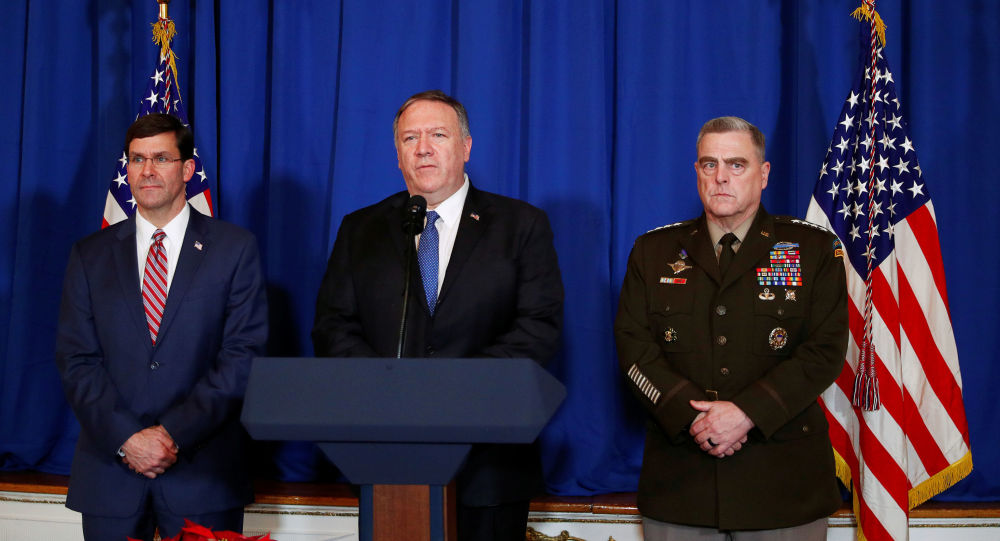 The US carried out “precision defensive strikes” in Iraq and Syria after a US defense contractor was killed Friday near Kirkuk, Iraq. While Washington appears content to continue fueling the weapons industry, Code Pink’s Ariel Gold told Sputnik the US is “playing with fire” instead of focusing on de-escalation.

Gold, the national co-director of anti-war group Code Pink, joined Radio Sputnik’s By Any Means Necessary to discuss the US military’s deadly strikes on a total of five Kata’ib Hezbollah facilities on Sunday following the Friday killing of a US defense contractor and the potential fallout for the region.

“I think the real question here is: what are US military contractors doing in the Middle East?” she questioned. “And we can’t help but remember that if they weren’t there, they wouldn’t be hit.”

As a result, she explained to hosts Sean Blackmon and Jacquie Luqman, the US is now in a position of heightened tensions with Iran, which recently condemned Washington’s so-called “defensive strikes” against Iraqi forces as “direct evidence of US terrorism.”

The Iraqi Popular Mobilization Forces, or Hashd al-Shaabi, issued a statement on Monday which estimated at least 25 individuals were killed and another 51 injured as a result of the US drone strikes. The umbrella organization covers a wide array of militia groups formed in 2014 to fight back against the steadily expanding empire of Daesh, which dominated large portions of Iraq and Syria until it was pushed out of Iraq completely by the end of 2017 with the help of Iranian and, to a lesser extent, US forces.

The US has long claimed the militias operate as “proxies” under Iranian control.

US Secretary of State Mike Pompeo asserted to the American public on Monday that the strikes were carried out because the US “will not stand for the Islamic Republic of Iran to take actions that put American men and women in jeopardy.”

“We will — we will always honor that commitment to take decisive action when that takes place,” he said in an address issued from US President Donald Trump’s Mar-a-Lago resort in Palm Beach, Florida. “And we continue to demand that the Islamic Republic of Iran act in a way that is consistent with what I laid out, back in May of 2018, for what it is that we expect Iran to do so that it can rejoin the community of nations.”

The demands referenced by Pompeo have been slammed by organizations ranging from the Islamic Revolutionary Guard Corps to the European Union and were laid out shortly after the US left the Joint Comprehensive Plan of Action on May 8, 2018.

Gold pointed out that despite Trump campaigning on pulling the US out of “endless wars,” he is clearly beholden to the defense industry, and through actions such as the recent drone strikes in Iraq and Syria and sanctions imposed on Iran, the US is emboldening the same groups they label “terrorists” in the Middle East.

“We are causing more suffering - the first layer of suffering being the direct effect of the brutal, brutal US sanctions, and the second layer being that we are emboldening the most repressive, hardline factions in Iran, giving them legitimacy and … providing means for them to be even more repressive.”

She went on to highlight that even though medicine, which is not subject to US sanctions because it technically falls under the “humanitarian” label regarding trade, the “overreaching” and complex nature of the sanctions makes other countries around the world “terrified to do any business with Iran - including selling medicine.”

Sanctions targeting other areas, such as civilian technologies like internet infrastructure, provide clear examples of how Washington’s policies can backfire. Gold explained that due to the sanctions in the tech field, the government of Iran was able to place the majority of the country on a strictly domestic internet service.

“So when the … brutal, recent protests in Iran broke out and Iran responded with a brutal and horrific crackdown - that included blacking out the internet - they were able to do so because of that change in [the] combination of international and domestic technology to domestic only,” she said. “We are providing them with the tools to make suffering even more severe.”

“I think we can’t avoid looking at who profits from this. Who profits from bombs versus diplomacy?” Gold asked rhetorically. “It’s the weapons industry, which is literally making a killing off of killing.”