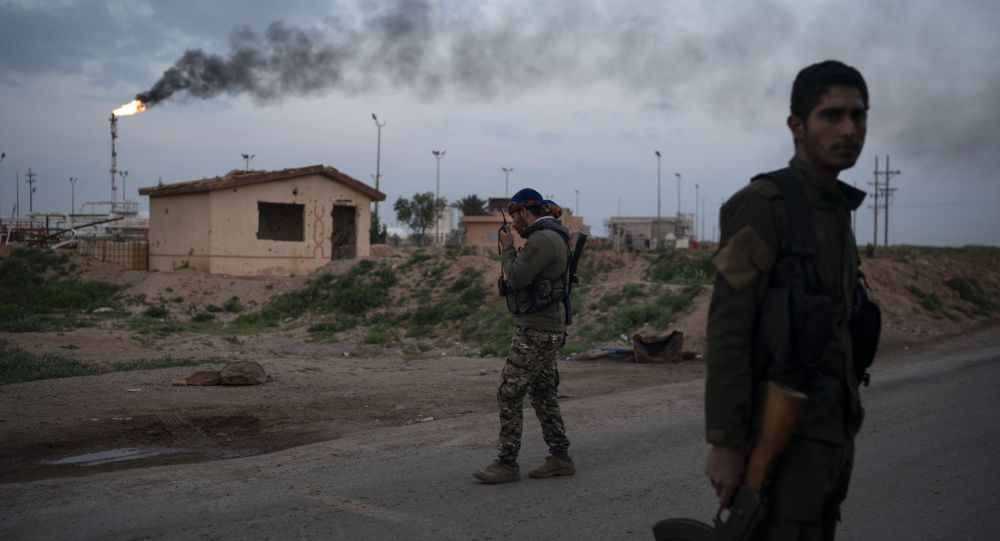 Although the Syrian government has appeared to make strides in its efforts to overcome conflict hardships endured since early 2011, additional difficulties arise as the US has opted to attack the country through economic warfare, Peter Ford, the former UK ambassador to Syria, told Sputnik.

“The last year has been a year of ebbing and flowing, zig zags … and not much forward movement. We ended last year with the final defeat of [Daesh]. They [Daesh] were losing vast villages on the upper Euphrates and at least during the last 12 months, [Daesh] has not regrouped in any very significant way although they continue to lie low … which is at least one small step forward,” Ford told Loud & Clear hosts John Kiriakou and Brian Becker on Tuesday.

“But we’ve seen zig zags, of course, [when it comes to] US presence. A year ago, [US President Donald] Trump was saying that he was going to pull out all of the troops. Well, he was walked back twice on that.”

“But going forward, we’re seeing more economic warfare. It seems that the US, having failed to change the regime in Syria by military force or by proxies, is tightening the economic screws and the main reason why the US is keeping hold of the production facilities in eastern Syria. So, the economic situation is becoming more and more serious and dire in Syria and it’s a major reason why refugees are not going back,” Ford explained.

In late October, the Russian military released a detailed report on US oil-smuggling activities in Syria, proven by satellite intelligence data. According to the Russian military, the Pentagon, CIA, and private military contractors agreed to engage in oil smuggling operations with the Kurds and US-controlled oil companies, resulting in profits of over $30 million per month, Sputnik reported. Also in October, Trump said that some American troops would remain in northeastern Syria to “guard oil” from Daesh militants.

According to fellow guest Rick Sterling, an investigative journalist and member of the Syria Solidarity Movement who visited Syria in both September and October, there is “slow but steady progress” in the country in terms of recovering from the war.

“Just in the last week, the Syrian Arab Army is advancing in [the Syrian city of] Idlib and has made substantial gains; over 20 villages have been recaptured by the Syrian government and the militants in that area, they seem to be in retreat … I was in [the Syrian city of] Homs and you can see major parts of the city that are destroyed but you see construction equipment at work and they’re rebuilding. Even buildings that had been damaged in the conflict - you could see laundry outside the veranda indicating that people are moving into those buildings even though they seriously need reconstruction. Other parts of the city have been untouched by the war … I think it’s very slow but there is steady progress to Syria winning the war,” Sterling pointed out, also noting that “it looks like the Syrian government is intent on recapturing Idlib before they turn their attention to east Syria where the US and its puppets are based.”

Despite the fact that Syria has been ravaged by war since 2011, there are still some parts of the country’s economy that are functioning.

“We tend to overlook the importance of agriculture. Agriculture is one sector that doesn’t get damaged that much in war … this is the mainstay of the Syrian economy … they have a trickle of oil. Of course they don’t get much from tourism these days but even that is seeing some improvement. And then there’s the war economy itself, which surprisingly keeps a lot of businesses in business. But the economy is pretty dire. And I greatly fear that the latest round of sanctions … that Congress just approved [for alleged war crimes] are going to make things worse for ordinary Syrians,” Ford explains, also adding that the US continues to collaborate with the terrorist groups in Syria.

“I'm afraid that in the eyes of the Pentagon and the American security state, the [number one] public enemy is [Syrian President Bashar Al-] Assad … With regard to the dubious groups with which the US is allied, they continue to play with fire never learning the lesson that these groups could turn into monsters that bite the western powers themselves. And so, we’ve seen attempts in recent weeks to begin to whitewash [jihadist group] Al-Nusra Front to portray them as good rebels that are only against Assad,” Ford added.

However, on a positive note, unlike in other cases of US interventionism, Syria continues to stand up against the US government.

“In 2010, Damascus was known as one of the safest cities in the world and then in 2011, as you indicate, the conflict in that country erupted and Damascus itself was threatened, seriously threatened in the early years, but it is more safe now and that’s a sign in some sense, the Syrians are winning … it’s a country that’s standing up for independence and international law and the ability to govern its own affairs and is supported by Russia and China and other countries around the world. What we have seen is the contrast between Libya, [where] NATO succeeded in overthrowing the government and creating chaos, versus Syria which has successfully resisted with the support of allies from Lebanon and Iran as well as Russia,” Sterling explained.

Meanwhile, the Western narrative of Syria continues to be exposed as a “false construct,” Ford noted, referencing a series of WikiLeaks revelations last week that showed that the Organization for the Prohibition of Chemical Weapons (OPCW) released a doctored report on Assad’s use of chemical weapons in April 2018, which is the crux of the Western powers’ Syrian narrative.

Russia Registers 55 Ceasefire Violations in Syria Over Past 24 Hours

Syria; Trump’s Impeachment; Socialism in the US