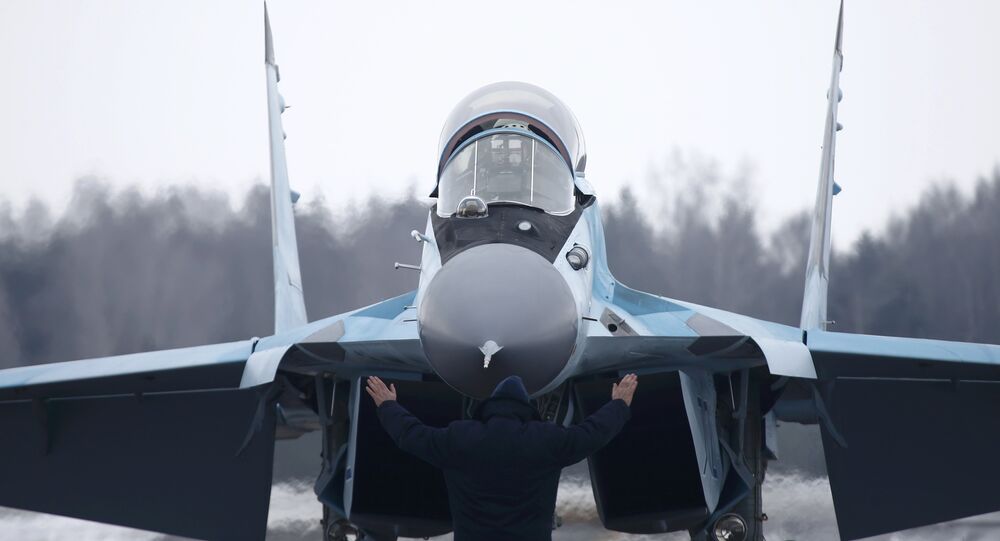 New Delhi (Sputnik): With the signing of the Industry Security Annex agreement between Indian and the US government on Thursday, the contest for the Indian Air Force’s $15 billion fighter jet tender has become more intriguing.

The signing of one of the most critical "foundational agreements" clears the way for Boeing and Lockheed Martin to compete in the forthcoming tender with the F/A-18E/F and F-21 respectively, says former squadron leader of the Indian Air Force (IAF) and prominent Defence Analyst Vijainder K. Thakur.

Indian Defence Minister Rajnath Singh has also expressed hope that the signing of the ISA will enable the smooth transfer of classified technology and information between private entities in the two countries.

The Industry Security Annex (ISA) is considered an essential agreement for any country seeking to receive high-end defence technology from the US.

Since the IAF is looking for a replacement for its Soviet-era MiG-21, MiG-23, and MiG-27 light-medium fighter jets, the government is expected to fill in the void created by these jets.

"The replacement would logically be a reasonably priced medium fighter such as the F-21, MiG-35 or SAAB Gripen. Dassault Rafale, Eurofighter and the F/A-18 would be too expensive and heavy for IAF requirements, considering the limited budget and large purchase quantity," Thakur explained.

Some of the analysts put their weight behind the Rafale. They consider that French jet manufacturer Dassault may lower their quote price in the 114 jet tender since it has already amortised many of its costs after winning the tender for 36 Rafales.

Nevertheless, this October, Indian Air Chief Marshal Rakesh Bhadauria had toned down this argument, saying that to supply more Rafales, Dassault would have to win the tender.

"Our plan is to build 114 multi-role fighter aircraft (MRFA) in the Strategic Partner (SP) model, and that is currently being followed," said Bhadauria.

Former financial advisor to the Indian Defence Ministry Amit Cowshish said that going by the previous experience, "This time more than one aircraft is likely to meet the requirements, which implies that the choice may not be restricted to the US fighters".

Cowshish has conducted dozens of defence deals over the last decade.

Most Indian analysts unequivocally believe that cost will play the most crucial factor in the selection, considering the severe shortage of funds for the modernisation of the IAF.

In 2019-20, ending March 2020, the IAF received nearly a $5.1 billion budget for modernisation that included $3.5 billion for aircraft and aero engines.

With the current state of the Indian economy, the budget may either go down or remain stagnant next year as well.

"There will, of course, be stiff competition among various manufacturers in offering technology transfers, not least because of the size of the order. But this may not be the deciding factor; I guess that, apart from the strategic considerations, finances will play a significant role in the decision-making process," ex- financial advisor Cowshish said.

Taking into account the costs and requirement of the IAF, Defence Analyst Vijainder K Thakur said: "F-21 and MiG-35 would be hot favourites. Their design is of a similar vintage. The MiG-35 probably has greater growth potential, but the F-21's long term costs are likely to be lower."

The IAF has three choices as of now, for stealth fighters. First, the abandoned PAK FA stealth fighter programme with Russia, in which it has already invested in the preliminary phase of the project famously known as fifth-generation fighter aircraft; second, the home-grown Advanced Medium Combat Aircraft (AMCA) programme, and third, the American F-35 jet.

Besides offering F-21s under the Narendra Modi Government's Make in India programme, Lockheed Martin has mentioned in the recent past, that it is indeed open to working with India on the AMCA, as well as the Light Combat Aircraft, the MK2.

Currently, Washington is exporting F-35 to its allies at a price of around $90 million per airframe.

"India would pragmatically be looking at manufacturing technology or Transfer of Technology (ToT) rather than know-how for cutting-edge electronics, materials and engines. Industrial ToT on offer is likely to be similar from all vendors. No country will give away know-how that India's Defence Research and Development Organisation (DRDO) might seek," Defence Analyst Thakur hinted.

New Delhi will have to remain rational while choosing fighter jets to replace MiG-21, MiG-23, MiG-27 light and medium fighters, he added.

Additionally, IAF Chief Bhadauria has been throwing his weight behind the Indian-made Advanced Medium Combat Aircraft (AMCA) project since he took over the affairs of the 140,000 troops strong force.

Considering the past record of the DRDO in developing home-grown products, defence analysts, have opined that the AMCA is still several years away.

"I think the IAF will eventually go for the Su-57, as Russia will ensure that the fighter meets most IAF expectations, the AMCA will take much longer to develop than is currently projected, and no other country is offering a 5th generation fighter to India," Analyst Thakur added.