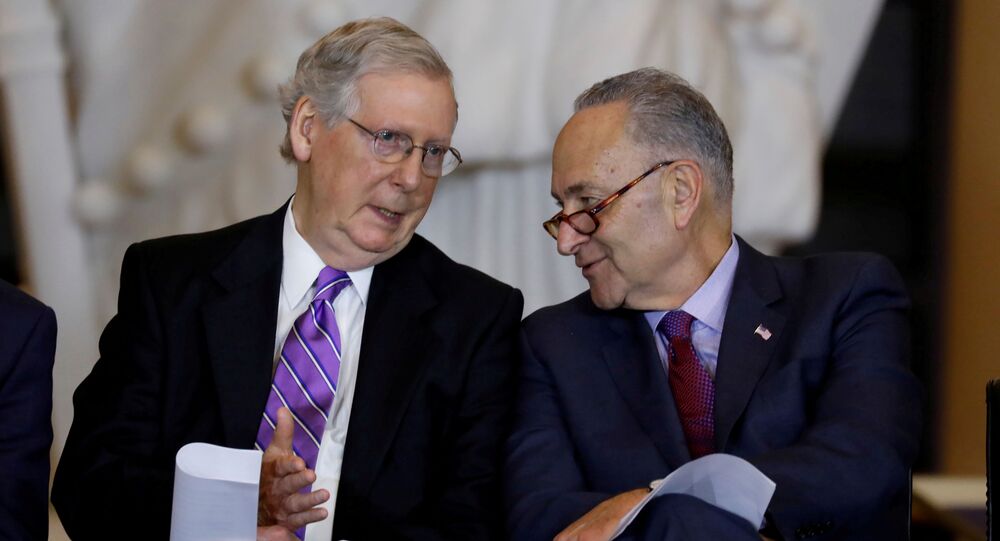 Just days before a full House vote on impeachment, lawmakers in the Republican-controlled Senate are already making their case against bringing witnesses forward. While the GOP and Democrats appear more divided than ever, one expert explained to Sputnik that there is one area both sides of the aisle can agree on avoiding: Russiagate.

Joe Lauria, editor-in-chief of Consortium News, founded by the late Robert Parry, and the author of the book "How I Lost, By Hillary Clinton,” joined Radio Sputnik’s Loud and Clear on Monday to explain why he believes lawmakers are not acting in the best interest of the American people and what steps should be taken if the impeachment process continues.

While leading Republicans, such as Senate Majority Leader Mitch McConnell and Senator Lindsey Graham, appear dead set on a speedy acquittal for US President Donald Trump, Lauria told hosts Brian Becker and John Kiriakou that it would be an “important opportunity missed to not bring various witnesses to this trial,” because doing so would bring Russiagate to the forefront of a national dialogue and pick apart the “Cold War rhetoric” that came about during former special counsel Robert Mueller’s years-long investigation of alleged Russian interference in the 2016 presidential election.

The editor asserted that Republicans are wary of bringing witnesses forward because neither party wants to reveal their respective partisan roles of being guardians of corrupt intelligence organizations. And if pressed into a situation in which they do have to reveal the truth, they will use excuses that hinge on the so-called “good of the country,” Lauria said.

“They are more anti-Russian than they are pro-Trump,” he argued, speaking of the GOP members of the Senate. However, the way in which impeachment advances, at least to the American people, should not be about the upcoming election, but rather “what the FBI, the CIA may have done” and “what this whole Russiagate nonsense was about [and] how it started.”

Lauria pointed out that the sloppiness of the US intelligence agencies has already presented itself in former FBI Director James Comey’s recent admission to being “overconfident” in claiming the agency made no mistakes in its requests for Foreign Intelligence Surveillance Court warrants, one of which was used to surveil Trump campaign aide Carter Page.

“It hides the question of whether Carter Page was in on this whole thing all along as a CIA asset,” he contended. “Those answers will never be given to the American people if the Republicans do not bring witnesses to that trial to defend their president - their Republican president.”

“Trump, frankly, has every right to be fuming about this,” Lauria said, adding that the US president’s lawyer Rudy Giuliani should even be called to testify so that he can present all the evidence he claims to have and expose what partisans fear.

“There are people who might be convinced that the FBI, the CIA were deeply involved in trying to stop a campaign of a president - regardless of which party - and that Ukraine may have been the one who colluded and not Russia,” he explained.

“We’re not going to get these answers if the Senate takes this way out, and they’re going to take that way out.”

Three Bodies Found Beneath the Alamo Amid Controversial $450 Million Renovation