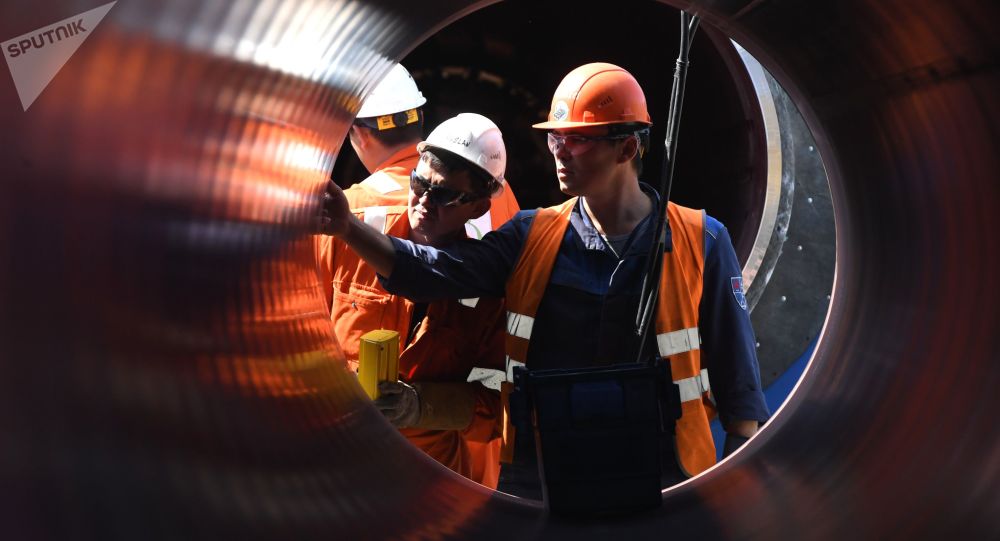 German observers insist that Berlin is not doing enough in terms of criticising Washington's interference in its economic affairs, after the US Congress has introduced a bipartisan bill imposing targeted sanctions on those involved in the Gazprom-led Nord Stream 2 gas pipeline project.

The US bill targeting Nord Stream 2 participants prompted a harsh rebuke from the German Foreign Ministry which tweeted: "Decisions on European Energy Policy are taken in Europe. We reject foreign interference and, as matter of principle, extraterritorial sanctions."

German Chancellor Angela Merkel has not so far commented on Washington's forthcoming measure. However, Markus Buchheit, a member of the European Parliament from Germany's right-wing Alternative for Deutschland, believes that the ministry's criticism towards the US is not enough.

"In his comments, German Foreign Minister Heiko Maas confines himself to half-hearted statements of displeasure, but the threatened US sanctions are in fact a blatant encroachment on our national sovereignty that must be strongly rejected," Buchheit insists.

According to the German politician, Nord Stream 2 is "a crucial component" in diversifying the country's gas supply, "especially against the background of the uncertain transit situation in Ukraine."

"In addition, we cannot and do not want to become even more dependent on American liquefied natural gas (LNG) supplies, which may have played a decisive role in the House of Representatives' decision," he argues.

"The proof will be in the pudding and be delivered no sooner than the moment that gas is actually flowing through the pipeline and arriving in Germany," Beck notes endorsing the foreign minister's commitment to defending the country's national interests. "Germany has the right to choose its own trading partners and should only be accountable to the Germany people.''

Gerhard Mangott, a political analyst at Austria's Innsbrook University, draws attention to the fact that "the German government has not yet issued a formal statement on the US Congress’s initiative to impose sanctions on EU companies collaborating with Gazprom in the Nord Stream 2 project."

"So far we, albeit a very harsh, statement by Foreign Minister Maas," he says. "But even Maas has not hinted at any German response if the US sanctions will become law in a couple of weeks. The US will impose these sanctions regardless of the position of the German government. Any counter action, like tariffs on US LNG deliveries to the EU, need to be approved at the EU level. Germany cannot do it on its own. This is due to current European law".

According to Mangott, the problem is that EU member states are divided on the issue of Nord Stream 2 with Poland, Latvia, Lithuania and Romania vehemently opposing the pipeline.

"Therefore we will not see any actions taken on the level of the EU," he explains.

To add to the controversy, Berlin is "very much afraid" that if it responds to the imposition of Nord Stream 2 sanctions the US may retaliate by slapping more tariffs on Germany’s automobile production – "a branch which is already is in a difficult economic situation," adds Mangott.

"Further estrangement is unlikely, as the EU does not have a common position on Nord Stream 2," he says. "However, US sanctions will boost fissures and cleavages inside the EU."

Meanwhile, Nord Stream 2 is nearing completion and is expected to become operational in the middle of 2020, as Deputy Prime Minister Dmitry Kozak reported on 21 November.

Nord Stream 2's annual design capacity amounts to 55 billion cubic metres of gas. Together Nord Stream and Nord Stream 2 will deliver 110 billion cubic metres of Russian hydrocarbons a year to Europe making Germany an important energy hub. Although Washington has repeatedly threatened to subject German participants of the endeavour to sanctions, Berlin has continued to proceed with project. In October 2019, Denmark finally gave the green light to the project to pass through its territorial waters, allowing for the completion of the project in mid-2020.