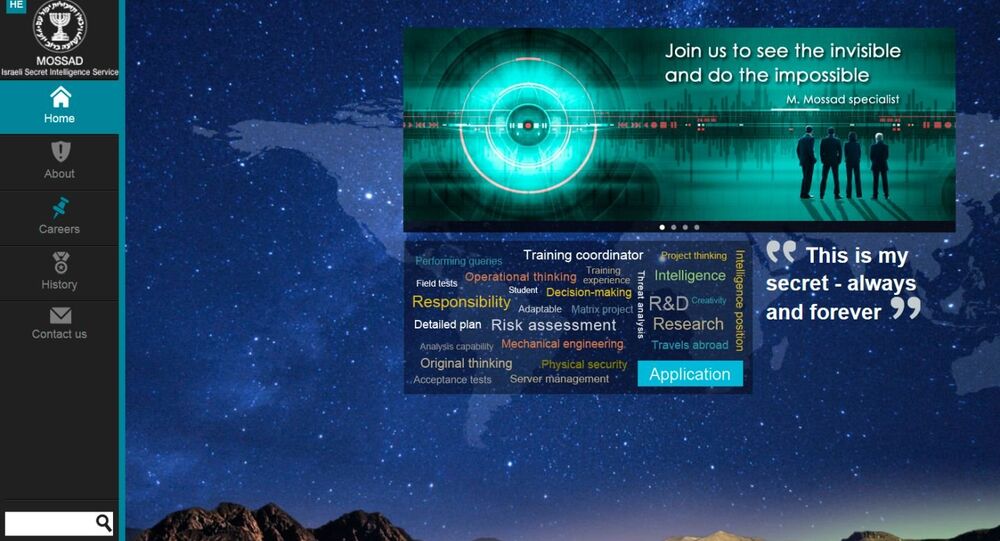 There is much speculation surrounding the Mossad, the Israeli secret service, responsible for intelligence collection, covert operations, and counterterrorism. Yossi Melman, a prominent Israeli journalist and author specialising in intelligence affairs, has busted most common myths surrounding the agency.

Exactly 70 years ago, David Ben-Gurion, the first prime minister of Israel authorised the establishment of the Central Institute for Coordination which later turned into what we know as the Institute for Intelligence and Special Operations, or the Mossad, one of the most mysterious and discussed secret services in the world.

At that time, Israel found itself in a unique position encircled by hostile Arab countries which refused to recognise the Jewish state. The very next day after the publication of the 14 May 1948 Declaration of the Establishment of the State of Israel, five Arab nations invaded the territory of Britain's former Palestinian mandate. Earlier, Arabs had refused to adopt UN Resolution 181, which would divide Palestine into Jewish and Arab states, with some of them maintaining a boycott of Israel until the early 1990s. Under these harsh conditions, the Mossad kicked off operations aimed at ensuring the security of the Jewish people.

Mossad Managed to Score Some Big Successes Over the Years

During its 70-year long history the Mossad has managed to score some big successes says Yossi Melman, an Israeli leading investigative journalist and the world's known bestselling author of non-fiction books on the Israeli intelligence community.

For example, in 1956, the Institute for Intelligence and Special Operations managed to smuggle a copy of the secret anti-Stalin speech by Soviet leader Nikita Khrushchev across the Iron Curtain. The operation brought the Mossad great respect, the investigative journalist recalls.

In 1960, the agency kidnapped Adolf Eichmann, the SS officer who played a leading role in the Holocaust, referred to as the "Final Solution to the Jewish Question" by Hitler. Due to the Mossad's actions the Nazi war criminal was put on trial in Israel, Melman notes, adding that though everyone knew that Eichmann was abducted from Argentina, Israel never acknowledged how it did it. This case hit the headlines worldwide, further promoting the Mossad, the author recollects.

© AP Photo /
The 1961 file photo shows Adolf Eichmann standing in his glass cage, flanked by guards, in the Jerusalem courtroom during his trial in 1961 for war crimes committed during World War II

How Did Mossad Gain Its Reputation?

"Why did the Mossad gain its reputation? Because of the special circumstances of the state of Israel", Melman observes. "Small country, surrendered by enemies, many wars. Some enemies don't recognise the right of Israel to exist, for example, Hamas, Hezbollah, and Iran. So, because of these circumstances, the Israeli military – not just the Mossad – and intelligence services have been committed to doing everything to defend the right of Israel to exist. And if you want to defend yourself, you have to be sophisticated, to be technologically advanced. So that's the main reason".

On the other hand, with Israel being a society of Jewish immigrants, the Mossad could recruit agents who spoke different languages and had different cultural, social and economic backgrounds, which helped work with people across the world, the author explains. The third reason, according to Melman, is the determination of the Israeli secret service to carry out its missions and its high values.

Besides, the Mossad's ability to cooperate with other intelligence services also contributed to the agency's successes, the investigative journalist opines.

"Above all, it's the CIA, but not only the CIA, [Britain's] MI6, Germany's BND, Saudi Arabia's General Intelligence Presidency (GIP) because of the rivalry with Iran and the threats from Iran and even with the Russian intelligence services. I wouldn't say that [this relationship] is as warm as with the CIA, but it's important. And even nowadays it coordinates what happens in Syria between the Israeli Air Force and the Russian Air Force. It's daily cooperation", Melman underscored.

What are Mossad's Primary Objectives?

The Mossad's bold operations prompted both bewilderment and speculations with the major myth being that the intelligence service was "killing people right and left", the author points out, rubbishing the claim.

"It is complete nonsense", Melman says, stressing that assassination operations have always been regarded as a last resort by the agency. "The Mossad killed very few people. Over 71 years of Israel maybe 60 people were killed by the Mossad, when I say killed by the Mossad, I mean outside the borders of Israel. I think no more than 60 maybe 70. I don't know the exact figure because it's secret. So, one a year? It's not a big deal. But it creates a myth; it scares people, it elevates itself into mythological proportions that there's an omnipotent organisation. Sometimes the myth is more important than the reality".

Outlining the objectives of the Mossad, the author underscores that the agency's number one priority is to conduct research and collect and analyse data.

"Over 70 per cent of the manpower of the Mossad is devoted to that mission", he points out. "And there, on the margins, you have these rare operations of assassinations of terrorists and sometimes, in the past, scientists, nuclear scientists in Egypt and Iran".

The investigative journalist highlights that the Mossad is no exception: spooks from other countries are routinely involved in all sorts of cyber and espionage activities aimed at obtaining valuable data or eliminating terrorists. "In this case, the most important rule is not to be caught", he remarks.

"If you are caught then there are troubles because you are exposed, and then other countries are starting to investigate", the author says. "Sometimes, deniability helps other nations because you can tolerate breaching other nations' sovereignty as long as you don't acknowledge it. As long as you leave it obscure, and as long as no harm was done, then you live with it- you turn a blind eye".

One of the Mossad's former goals was the repatriation of Jews but this mission is not important any more since Jewish nationals are now allowed to return to their homeland virtually everywhere including Iran, Melman elaborates. Instead, the Israeli intelligence service is now focused on helping and protecting Jewish communities around the world from Anti-Semitism with the help of local police forces.

Over the Last 70 Years, Israel Managed to Break Isolation

The question then arises as to how the Middle East has changed over the last 70 years with the help of the Mossad.

"Oh, the Middle East has completely changed", the author emphasises. "First of all, Israel managed to break the isolation. We have some sort of not fully diplomatic relations with Arab nations. Still, we have some diplomatic missions or representatives or encounters with more Arab countries, whether it's Morocco, or of course Saudi Arabia, or the United Arab Emirates".

While the Arab nations are maintaining cooperation with Israel, being guided by enmity against Tehran, Israel and Iran also have common interests in the Middle East, the journalist stresses, citing the struggle against Daesh (ISIS/ISIL)*.

Lots of things have changed, and Israel has emerged as a viable and technologically developed nation, by breaking isolation economically, politically, diplomatically, and even from the military and security point of view, Melman concludes.