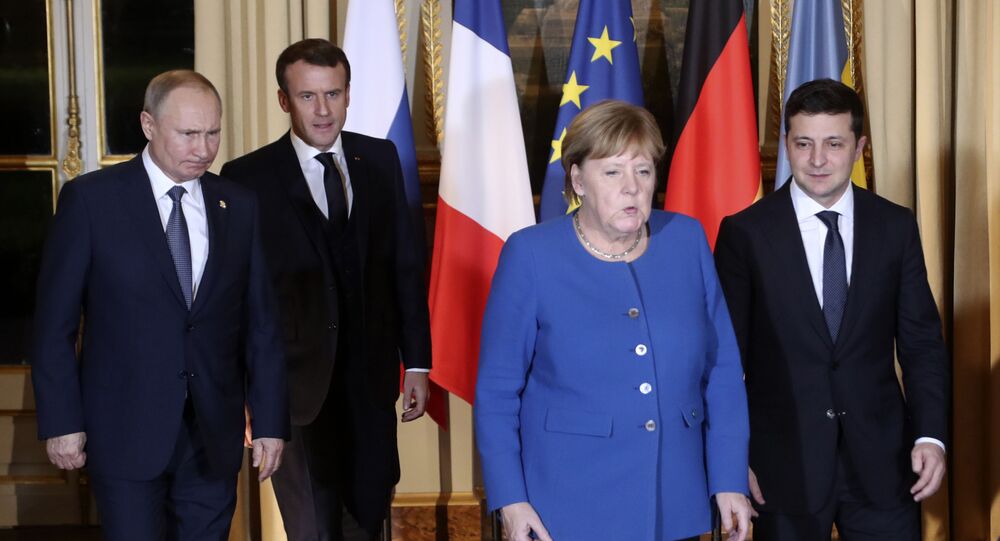 PARIS (Sputnik) – The Normandy Four summit held in Paris on 9 December, the first talks in this format since October 2016, resulted in the leaders of Russia, Germany, France and Ukraine reaffirming their commitment to the Minsk agreements.

After a three year pause in negotiations, the leaders of the four parties met with the goal of discussing progress and further steps to take on the settlement of the ongoing conflict in the eastern Ukrainian regions of Donbass.

Due to the prolonged break in the negotiations, the international community had high expectations for the talks, especially also because this would be the first face-to-face meeting between Russian President Vladimir Putin and his Ukrainian counterpart, Volodymyr Zelensky.

Ahead of the talks, several politicians and analysts expressed their exceptions of the outcomes of the much-anticipated talks.

Gilles Lebreton, a French member of the European Parliament for the right-wing Rassemblement National party, stated that he believed French President Emmanuel Macron would initiate further negotiations with Putin following the Normandy talks.

"President Macron will initiate further negotiations with President Putin. A good reason for this is that it is a way for him to keep control over Angela Merkel, who keeps on inflicting camouflage after camouflage to the French government in the ‘axis Berlin – Paris,' the backbone of the EU. Merkel is dominant in the functioning of the EU but insignificant indeed in foreign policy, and will remain so", Lebreton said.

He also said he believed Putin was interested in launching further negotiations with the Normandy group, which would be beneficial to all sides if they were properly conducted.

Jean-Paul Baquiast, a former top civil servant and political analyst in Paris noted that he believed Zelensky was a key factor in terms of potentially acting as a bridge to improve relations between Russia, Ukraine and the European Union.

"Zelensky holds the keys to the improvement of the relations of the European Union with Russia", the analyst said.

He added that Macron saw the talks as a way to potentially improve France's global image as a political mediator, but that at the same time he would meet a lot of domestic resistance due to "systematic anti-Putinism that has been spread [in France]".

Meanwhile, German Chancellor Angela Merkel was expected to remain deeply pro-American in Berlin's stance in the negotiations, the analyst said.

"Germany might support Macron’s position. Merkel is a non-entity when it comes to foreign affairs, but Germany will basically remain deeply pro-American. German economic interests in the US and the fact that the country serves as an advanced platform for the US Army are two important factors for remaining close to the US positions", Basquiast said.

On Putin's position, Basquiast said the Russia leader would remain firm on his position on Ukraine, but Donbass remained more open-ended.

"On Crimea, Russia will never let go. For the Donbass region, I am not sure, but I think that the Donbass will remain very important for Russia, for various reasons (Russian-speaking population, resources such as shale gas in large quantities). But Russia should be able to maintain its influence without a military presence", Basquiast said.

US political analyst specialising in Russian and Ukrainian affairs William Pomerantz said ahead of the talks that he expected that this was just the beginning of the discussion on the settlement of the conflict in eastern Ukraine and that Putin was in a better position to negotiate at the table.

"The question is who has the better position. I think at the moment it is obvious that it is Putin. Zelensky is limited in what concessions he can make", he said.

Ahead of the talks, leaders held tete-a-tete consultations and then dove into the negotiations, which lasted roughly two hours. Then Putin and Zelensky met for talks and then the four heads continued their discussion at dinner for about another two hours.

Upon the completion of the talks, the four sides adopted a communique in which they confirmed their commitment to the full implementation of the ceasefire in eastern Ukraine.

According to the joint statement, the disengagement of troops in new locations in Donbass is slated for late March 2020.

"They will support an agreement within the Trilateral Contact Group on three additional disengagement areas, with the aim of disengaging forces and equipment by the end of March 2020", the document said.

An updated demining plan will also be worked out, on the basis of a March 2016 Contact Group plan on demining activities.

© CC0
Normandy Four Leaders Hold Presser Following Summit - Video
The Normandy Four leaders also pledged to support "an agreement within the Trilateral Contact Group, within 30 days, on new crossing points along the line of contact, based primarily on humanitarian criteria".

Additionally, the sides agreed to facilitate the release and exchange of conflict-related detainees by the end of the year, based on an "all for all" principle.

Also, the sides made progress on negotiations concerning the Steinmeier formula.

"The sides stressed the importance of incorporating the Steinmeier formula and expressed interests in agreeing on all the legal aspects of granting special status to the Donetsk and Luhansk regions of Ukraine", the document said.

The sides also agreed to meet in the Normandy format in four months, during which time the aim of the talks would be to discuss the organization of local elections in the Donbass region.

Macron, as host to the talks, spoke first and called at the conference the conflict in Ukraine an "open wound" in Europe and stressed that stability on the European continent and "the construction of a new architecture of trust and security" depended on the settlement of the conflict in southeastern Ukraine, within the framework of the Minsk agreements.

Putin called the talks very "useful" and stressed that Moscow would do everything possible to ensure lasting peace in eastern Ukraine, but emphasized that conflicting sides must start a direct dialogue in order for the conflict to end. He also stressed that any agreements on Ukraine must focus on improving the lives of local residents in Donbass.

Zelensky meanwhile assured that Kiev was prepared to commit to fulfilling the reached agreement, noting that concrete steps were needed in order to work toward peace in the region.

Merkel expressed optimism over the sides have reached a consensus on the Steinmeier formula during the talks and said talks would now focus on how to implement it.