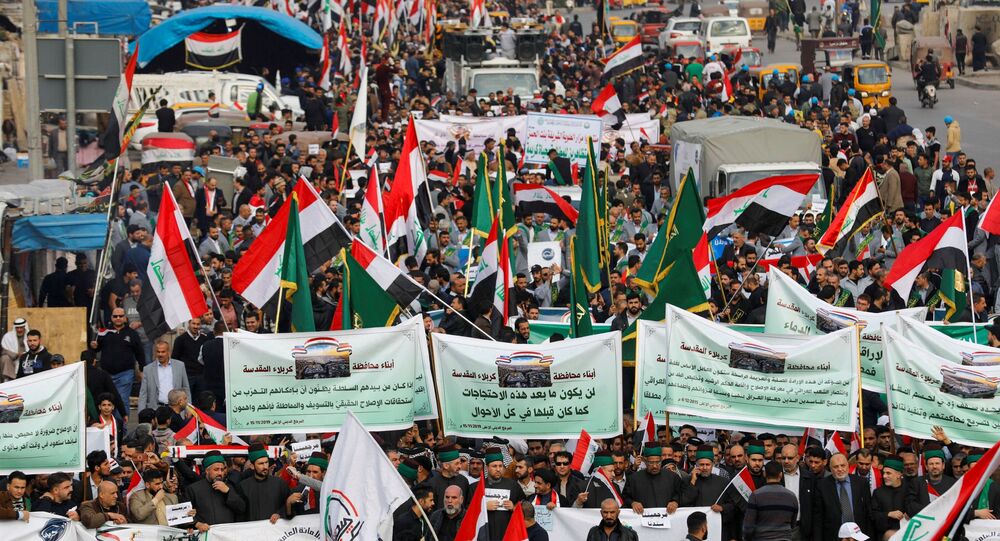 Despite the resignation of Prime Minister Adil Abd al-Mahdi last week, clashes between Iraqi demonstrators and counter-protesters with questionable affiliations have continued, prompting a response from the country’s top Shiite cleric.

Over a dozen individuals were stabbed in Baghdad’s Tahrir Square on Thursday, and according to anonymous sources who spoke with the Associated Press, those who carried out the stabbings were strangers who targeted nonviolent demonstrators.

“At least 460 protestors were killed in October and November in various central and southern cities, including Baghdad,” Ali al-Bayati of Iraq’s Independent High Commission for Human Rights said earlier this week, reported Kurdistan 24.

Eugene Puryear, host of By Any Means Necessary on Radio Sputnik, sat down with Loud and Clear on Friday to discuss the current situation in Iraq and explain what interventionist moves led up to these demonstrations.

Puryear told hosts Brian Becker and John Kiriakou that while a “colonial electoral structure ... was set up post-invasion” and “over $400 billion has essentially been looted from the country,” we are now seeing a “protest movement of people who are looking to reclaim the Iraqi identity” that was, in many ways, lessened following the 2003 US invasion.

In this attempt to “hit the reset button,” he pointed out, even Iraq’s top Shia Muslim cleric, Grand Ayatollah Ali al-Sistani, is calling for “a total consitutional overhaul” and warned that the government’s deadly crackdown on demonstrators could result in an even greater escalation of violence.

Puryear went on to say that a “Pandora’s box” was opened in Iraq following the formation of the post-invasion government through the imprisonment of those accused of nothing more than “political thoughtcrimes” or “not being aligned with the right people.” He explained that this policy of excommunication, to some extent, generated the nuclei of groups such as Daesh.

Rather than accurately perceiving Iraq, the US was living in an imperialistic fantasy world, according to the By Any Means Necessary host.

“It was like a total and complete fantasy world where these people were … in such a belief that this massive US military machine could do nothing wrong; could never fail; could destroy everyone in its wake, and, bizarrely, [they believed] that somehow people would want to have governments imposed upon them by some other country,” Puryear said.

“A million people, maybe, have died in Iraq. If you look at what’s happened in Libya, what’s happened in Syria, so much of this is really the spillover of that invasion - millions of people killed. It really is astonishing when you take a step back,” he stated. “The real results we’ve seen from the wake are absolutely criminal in every possible way and certainly morally reprehensible in every way.”

US Vice President Pays Unexpected Visit to US Military Base in Iraq, Meets President of Kurdistan

Two Mortars Land Inside Balad Air Base in Iraq - Reports