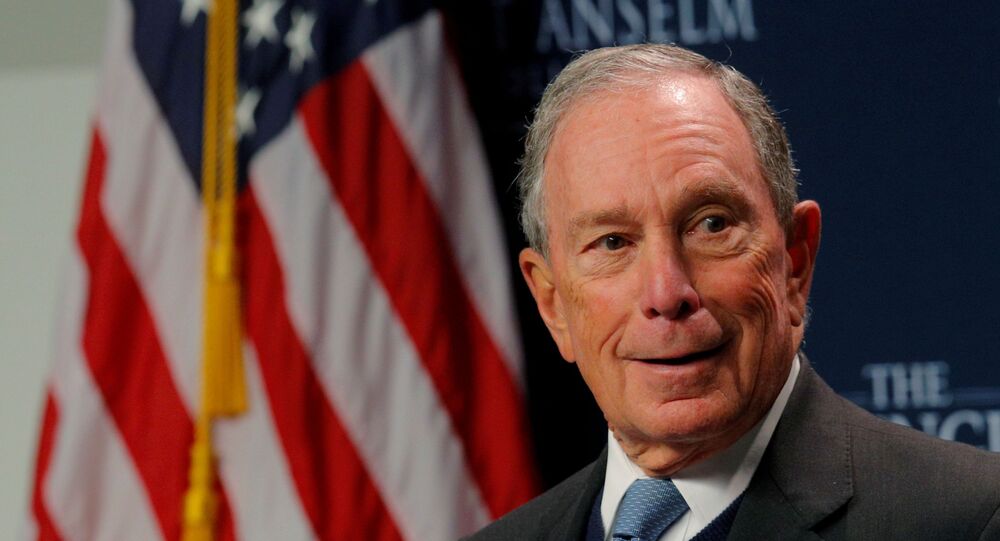 Bloomberg News' memo shielding the media owner and his Democratic rivals from its journalist's investigations raises justified concerns and may damage Mike Bloomberg's credibility among the moderate Left, international observers say, suggesting that the media mogul hasn't much of a chance in the 2020 presidential race.

On Monday, the Trump campaign announced that it would bar Bloomberg News from its events after the media outlet said that it would not investigate its owner, presidential candidate Michael Bloomberg, but would proceed with critical reporting on President Donald Trump.

On 24 November, when former New York City mayor and billionaire Mike Bloomberg officially threw his hat in the ring, CNBC leaked an internal memo sent to Bloomberg News' editorial and research staff stating that the media outlet would continue its "tradition of not investigating Mike and his family and foundation" and would extend the same courtesy to his prospective Democratic rivals.

Bloomberg & His Media Were Never Independent

Patrick Henningsen, a UK-based journalist and founder of 21stCenturyWire.com, says that Bloomberg News' approach comes as no surprise since "all US mainstream outlets are geared towards partisan bias to differing degrees".

According to the journalist, "this latest escapade only goes to prove that Michael Bloomberg and his media empire were never independent" which is likely to "damage his credibility with moderates on the Left".

"It's clear now that despite his seemingly liberal facade, Mr. Bloomberg is just another corporatist magnate seeking to buy his way into power", he notes.

For his part, Socrates George Kazolias, a Paris-based American reporter, media consultant and university lecturer, admits that "it is hard to explain why a press agency like Bloomberg would refrain from investigating Democratic candidates including founding-owner Michael Bloomberg" given that it is the role of the press to look into presidential contenders.

Commenting on the Trump campaign move, the media consultant voiced concerns that "the Republican Party is also excluding Bloomberg from their events" citing a tweet from Republican Party Chairwoman Ronna McDaniel.

Media outlets should be independent and fair, and this decision proves that Bloomberg News is neither.

The @GOP stands with @TeamTrump and will no longer credential Bloomberg representatives. https://t.co/nxWiBbEI0s

​However, according to Dr. Robert Gutsche Jr., associate professor in critical digital media practice at Lancaster University, Trump is no better than any biased media since he himself is opposed to any criticism towards him.

"Say what you will about the press in the US and any political or ideological bias – and some of that might be true – but Trump isn’t hiding his bias: He is in it for himself and opposed to any critical commentary and political action that he believes is against him," the academic underscores.

Meanwhile, Michael Bloomberg's leap on the bandwagon of the 2020 presidential campaign wasn't cheered by his progressive competitors. Thus, Bernie Sanders wrote a series of tweets insisting that "billionaires should not be able to buy our elections and we’re going to change that".

If you had a couple billion dollars, you could announce your candidacy for president and be taken seriously, even if you were the dumbest person on Earth.

Billionaires should not be able to buy our elections and we’re going to change that.

He’s wrong. That's why I'm investing in meeting thousands of voters, taking over 85,000 selfies, and building a grassroots movement that will fight for big, structural change. pic.twitter.com/DZftlFvyqi

​According to Kazolias, Michael Bloomberg does not have "much of a chance": "Any Americans willing to vote for a billionaire are already voting for Trump," he notes. "The Democratic base, unlike its leadership, is looking for something much more grass roots."

Bloomberg's Participation in 2020 Race is Part of 'DNC's Insurance Policy'

For his part, Patrick Henningsen believes that the timing of Bloomberg's joining the race plays an important role.

"Firstly, he's there 'for the ratio' - his presence on the stage will generate some much-needed additional media impressions for what is largely a tedious Democratic race for far, and to build up his personal brand - he's essentially buying hundreds of millions in media exposure by entering a race he knows he has no chance of winning," the journalist suggests.

However, the main reason for Bloomberg as well as Governor Patrick Deval's late entry into the race is "to dilute the field enough that there will be no clear majority, or 'outright winner' through the primaries, which will automatically trigger a second vote by the Democrat's infamous Super Delegates - hand-picked party apparatchiks selected for their loyalty to the establishment," Henningsen observes.

The journalist dubs it "the DNC's insurance policy" to select an "establishment-friendly nominee in the event that Bernie Sanders repeats his performance in 2016".

Sanders' supporters are voicing similar concerns on Twitter. While Michael Bloomberg has declared that his major aims are to defeat Donald Trump and "rebuild the country", some progressives suspect that in reality the billionaire is seeking to thwart Bernie Sanders's campaign.

"Sanders is walking into the same trap which snared him three and half years ago," Henningsen opines.

Who's Worse: Bloomberg or Everyone Else