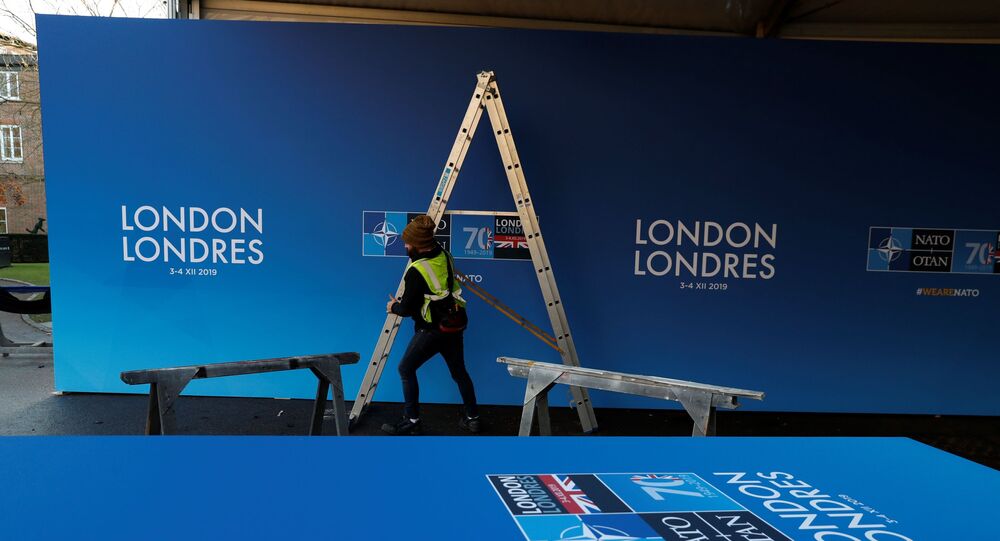 The 70th anniversary of the North Atlantic Treaty Organisation has been overshadowed by a growing rift between the bloc's leaders and the ambiguity of goals of the former Cold War instrument, which have prompted France, Germany and Turkey to call for the military bloc's reform.

On 3 December, Donald Trump lashed out at French President Emmanuel Macron over the latter's November remark, made in the aftermath of Washington's withdrawal from Syria which made way for Turkey's advance, that the alliance was "brain dead". Trump denounced the notion as "very nasty" and "insulting" for the 28-member alliance.

Earlier, the French president refused to apologise for the provocative comment, outlining the bloc's major pain points, including the post-Intermediate-range Nuclear Forces Treaty situation, the relationship with Russia and China, the Turkey issue, and the question of who is the real "enemy" of the alliance.

"I fully stand by what I did" in calling #NATO brain-dead, says French President Macron, with Sec Gen @jensstoltenberg. He says he's "glad" about the controversy it caused because "maybe we needed a wake-up call." pic.twitter.com/3KQnXRT7QL

​"Is our enemy today, as I hear sometimes, Russia? Is it China? Is it the Atlantic alliance’s purpose to designate them as enemies? I don’t think so," Macron asked rhetorically on 28 November, standing alongside NATO Secretary General Jens Stoltenberg. "Our common enemy at the alliance is, it seems, terrorism, which has hit all of our countries."

Rift is Growing Between US and EU

According to Pye Ian, an independent US political analyst, NATO's main problem is that it "became irrelevant nearly 30 years ago upon the dissolution of the Soviet Union and the Kremlin’s firm promises not to attempt a forceful land expansion westward."

The analyst notes that to some extent, Macron's concerns reflect the willingness of Germany, France, Italy and Spain – "at the least" – "to trade openly and freely with Russia, China and their economic allies" in order to deal with the continent's "chronic economic weaknesses".

However, European nations have been essentially blocked from doing so by "sanctions, embargoes, currency attacks, false flag fiascos, perennial threats and other impeding means" weaponised by the US and largely supported by the UK, he notes.

One of NATO's perceived "threats" is China's dominance of 5G telecommunications networks. Earlier, Washington managed to persuade some of its allies to get rid of China's Huawei equipment by threatening to scale down intelligence exchange. According to Ian, the truth of the matter is that China's telecom products "threatens to break up an Atlanticist-preferred global monopoly over communications – and eventually, individual mobile commerce – surveillance capabilities".

At the same time, Trump's tariff policy is deepening the rift between the US and its European NATO allies. On Monday, the US president vowed to impose 100% tariffs on $2.4 billion in French products over Paris' taxes on digital services provided primarily by US high-tech giants. In October 2019, the United States targeted $7.5 billion worth of European exports. Commenting on Trump's controversial punitive policy, Daniel Ives, managing director of equity research at Wedbush Securities in New York, and Thomas Prusa, Professor of Economics at Rutgers University in New Brunswick, come to the conclusion that the tariffs "are not being paid by foreign suppliers but by American taxpayers".

Fabio Massimo Parenti, an associate professor of economic and political geography at the Lorenzo de'Medici Italian International Institute in Florence, Italy, echoes Ian, opining that US and European interests do not coincide like in the past.

"The current clash between US and Europe on economic and military strategy issues, namely, on taxes and NATO's recent debate, are confirming an increasing fracture in the core of the Western system of alliance. I would say that a united North Atlantic Alliance does not exist anymore. The US, under Trump, is rethinking its economic and political position in the world, the same is true for the EU," he says.

Turkey Treated as an Outsider by US, EU

Macron's November rebuke of NATO prompted Turkish President Recep Tayyip Erdogan to outline his own vision of the military bloc's future and highlight the need for the alliance's "renewal". While the Turkish president is citing solidarity and unity as the "building blocks" of NATO, the problem is that Ankara is becoming increasingly at odds with the alliance over the recent years, Ian highlights.

"Despite being a NATO member for decades, Turkey has regularly been treated as an outsider", the analyst remarks, referring to the US and EU's controversial response to the 2016 attempted coup in Turkey, the EU's hesitance to let the country accede, as well as US financial threats against Ankara, which sent the lira down against the US dollar. Given all these, it's hardly surprising that Turkey is turning "eastward", Ian notes, citing Russo-Turkish rapprochement.

Additionally, Ankara is still struggling to promote its security agenda in Syria among NATO member states and has recently threatened to block the alliance's Baltic initiative unless it recognises Kurdish militias as "terrorists". Earlier, in November, Turkey withdrew from NATO's military drill in Norway after Mustafa Kemal Atatürk, Turkey's founder, and Erdogan were displayed as "enemies".

However, Turkey's acquisition of the Russian S-400 anti-aircraft missile system has sparked one of the crucial internal debates of the jubilee summit, according to Ian.

"Turkey’s buying of the Russian S-400 is a bold step taken – by any nation, let alone a NATO member – in declaring the irrelevance of NATO to its stated original intentions as a wider alliance", Ian says. "Naturally, the Russian S-400 retains design and technology that is more difficult to survey, monitor and track than are fifth-generation fighter jets or any other hardware provided by ‘traditional’ NATO members."

Following the row provoked by Macron's harsh criticism of NATO, France and Germany came up with separate plans for how to reform the 70-year-old military alliance. On 20 November, French Foreign Minister Jean-Yves Le Drian and his German counterpart Heiko Maas suggested that a group of independent respected experts may be formed to debate how to strengthen NATO's political thinking as well as the alliance's vision of its values and aims. The initiative was hailed by US Secretary of State Mike Pompeo as “eminently reasonable”.

"That NATO persists as an organisation at all begs the question over NATO’s leading elements intending upon belligerence as means of preventing sustainable economic competition arising from anyone else within the strategically critical energy, mineral and technological sectors," Ian highlights.

According to the political analyst, the alliance's "credible reform should foremost involve its member nations' pledging not to interfere with any other member's global economic interests".

"Anything short of that and NATO’s organisational irrelevance becomes all the more blatant, with perhaps further member nations of the alliance emulating what Turkey has been doing by conducting independent arms and energy trading away from the preference of NATO’s core custodians", he concludes.