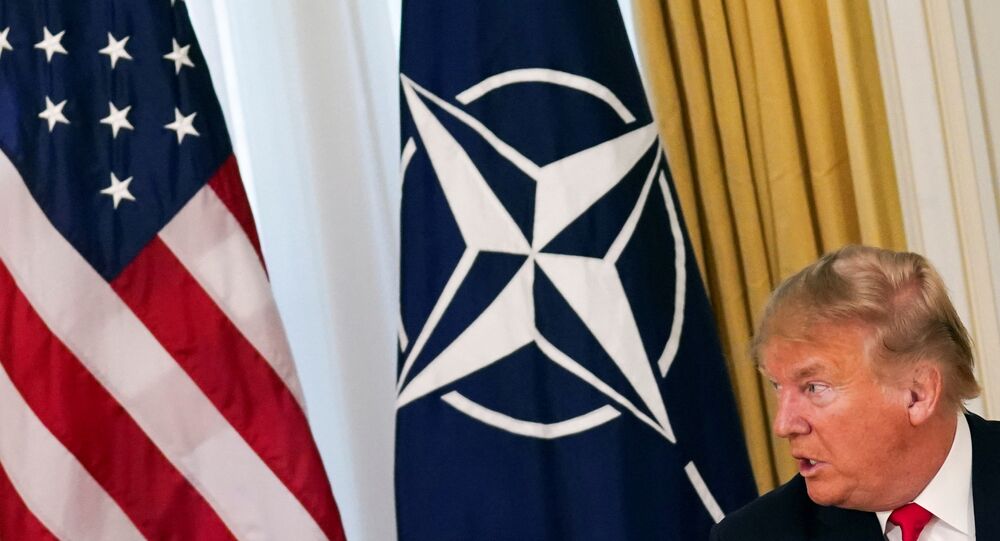 US President Donald Trump is currently in Paris, France, attending a summit celebrating NATO’s 70th anniversary. However, the multiple disputes between members suggest that the alliance is losing strength, Alexander Mercouris, the editor-in-chief of The Duran, told Sputnik.

The North Atlantic Treaty Organization (NATO) is a military alliance between 29 North American and European countries, which was established in 1949 by 12 members amid the beginnings of the Cold War between the socialist Soviet Union and its Eastern European allies and the capitalist Western powers who formed NATO.

“You have a lot of things going on. Firstly, there is the major disturbance that comes with having Donald Trump be the president of the US, a leader of the country that far and away dominates NATO. But secondly, five years into what is now a very prolonged and very deep confrontation with Russia - which lots of Europeans don't welcome and which Donald Trump himself [has] doubts about - there is growing concern about that confrontation and where it’s going,” Mercouris told Loud & Clear host John Kiriakou on Tuesday.

“And there’s also great questions about the whole viability of the entire enterprise, and that isn’t even taking into account the fact that with NATO having been enlarged … the alliance is struggling to reconcile the incompatible views of its different members,” he noted. After the socialist Warsaw Pact alliance, NATO’s counterpart in Eastern Europe, fell apart in the late 1980s, NATO nearly doubled in size as former Soviet allies switched sides and the Soviet Union itself was split into 15 successor republics, including Russia, with the new Baltic republics also joining the Brussels-based security pact.

So, [Turkish President Recep Tayyip] Erdogan and Turkey have a particular policy in Syria which the rest of NATO isn’t happy with,” Mercouris noted. “Turkey isn’t happy with these ideas about protecting Poland and the Baltic states, which it has no real interest in. And, of course, Turkey prefers at the moment to build close relations with Russia,” he explained.

“The ultimate story, I think here, is of an alliance that is well past its sell-by date and which is struggling to provide a coherent reason why it should continue going the way it has,” he noted.

On Wednesday, NATO member states will sign a joint summit statement that recognizes the “rise of China” and the “security implications” that such a rise could have for NATO members.

“China has the second-largest defense budget in the world and has recently displayed a lot of new, modern capabilities including long-range missiles able to reach the whole of Europe and the United States,” NATO Secretary-General Jens Stoltenberg announced Tuesday.

“The reason why China is [being designated a threat is] because, of course, the US -  which to be clear is the hegemonic power at the center of the NATO alliance - has a major quarrel with China It is unhappy with the rise of Chinese influence in the Pacific,” Mercouris told Sputnik. “It is worried about the extent of the Chinese economic challenge. It is dragging its European allies into its quarrel with China. I think the reason that this has happened is because some of the NATO states and the NATO bureaucracy have taken the line of least resistance on this issue, which is to agree with what the US wants.”

"You just can't go around making statements like that about NATO. It's very disrespectful,” Trump added.

“Unfortunately, what is happening is that beneath the surface of all these quarrels, the people who are making the real decisions in NATO are increasingly becoming not so much the big political leaders as the officials” who are part of the NATO bureaucracy, Mercouris said. “And the officials do have all kinds of strategies.”

“There is still, as we have seen so vividly in the impeachment proceedings in the US, a desire for further confrontation with Russia, a desire to move military forces over closer to Russia, a desire to play all kinds of geopolitical chess games against Russia in the Balkans and all sorts of other places,” he continued.

“Because the political leaders are unable and unwilling in some cases to get a grip on this process, the drift toward further confrontation continues. Because that's what the bureaucracy is programmed to do. That will only change if there is a major crisis … or unless some political leader within NATO finally manages to break free of all the other constraints and finally get a grip on the situation,” Mercouris noted.

NATO at 70: Bloc Cannot Hide Infighting Which Has Been Ongoing In Recent Years – Commentator