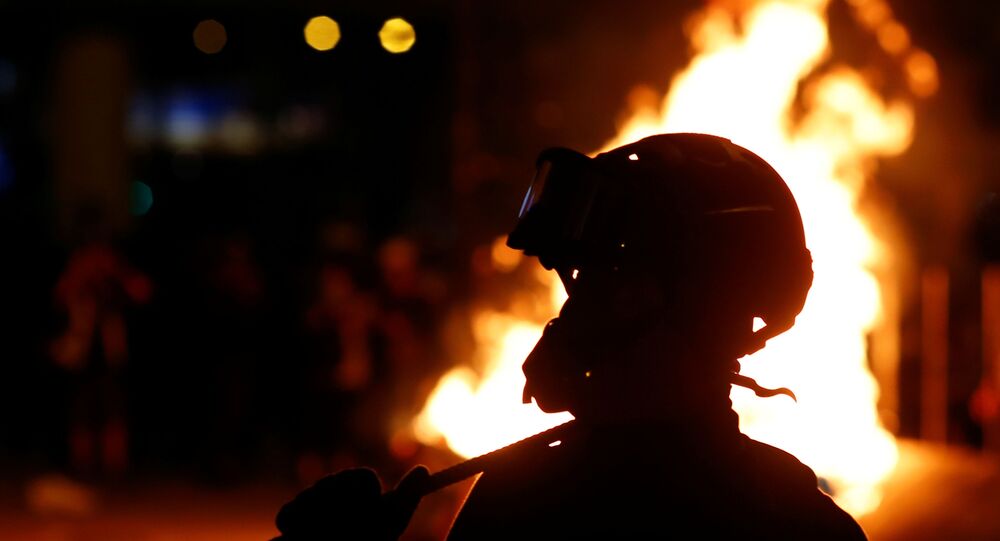 Washington's Hong Kong bill is likely to postpone the signing of the "phase one" agreement between China and the US, says Hong-Kong-based independent strategist Andrew Leung, explaining why the American rhetoric about the violation of basic freedoms in Hong Kong is overblown.

China has introduced sanctions against several American non-governmental organisations and banned US warships and military aircraft from visiting Hong Kong in response to the signing of the Hong Kong Human Rights and Democracy Act of 2019 into law by Donald Trump amid longstanding mass protests in the semi-autonomous city.

On Monday, Trump admitted that when it comes to the Sino-American trade talks the US legislation "doesn’t make it better". Previously, Washington and Beijing agreed to ink a "phase one" trade deal in a bid to bring an end to the bilateral trade war engulfing the two economic powerhouses since March 2018. However, according to sources familiar with the matter, cited by Axios, the negotiations have recently stalled over the US' Hong Kong bill.

'China Needs to Make a Stand'

Andrew Leung, an independent China strategist based in Hong Kong, believes that the US-China row over Hong Kong is "affecting the trade talks, at least initially" because of "these perceived interventions in Hong Kong's affairs and the support of some of the protesters, including the rioter element".

"China needs to make a stand. And this is going to affect the progress of the initial kind of agreement. And so it's quite likely it’s going to be postponed until the end of this year, until the end of December or even later," Leung predicts.

At the same time, the strategist notes that one shouldn't delude oneself into believing that the signing of a trade deal would "solve the kind of tectonic rivalry between the United States as the world's superpower and its rising challenger China."

"This kind of rivalry translates not only to trade, but technology - like Huawei - into Taiwan, Hong Kong, Tibet, but also the South China Sea on the military and also on the diplomatic front, as some of the Americans allies like Australia and also Canada are beginning to ally with the United States to push back against China 360 degrees. So this kind of across the board rivalry is unlikely to be resolved by any kind of trade, temporary agreement", he says.

When it comes to trade Beijing is unlikely to dispel Washington's suspicion that China's now challenging American dominance in many sectors, including artificial intelligence and 5G, even if the People's Republic opens up and protects intellectual property, Leung elaborates.

"China was welcomed into the WTO - because what China produced was just T-shirts and Nike shoes and then translating into cheap products for American consumers. But now China is perceived to be eating Americans lunch at a top table. And that's why all these trade talks are unlikely to resolve all these conflicts," he adds.

'Rhetoric That Hong Kong is Descending Into Suppression is Overhyped'

According to Leung, China's tough reaction to Washington's passing of the US Hong Kong Human Rights and Democracy Act was predictable given that the Hong Kong protests, which turned violent in June 2019, are affecting Taiwan and Tibet and also giving "a convenient stick for the United States to bash China with". Additionally, "there are threats against China's national security," he says.

"The imposition of sanctions [on] the US sends a strong signal that, of course, Hong Kong is different, Hong Kong is part of China," the strategist stresses.

Commenting on the US bill which is aimed at protecting Hong Kongers' freedoms in the eyes of American lawmakers, Leung recalls that before the city's handover 1997, "Hong Kong people were just keeping their eyes on the ground because there was no democracy" under the British rule. Currently, under the Basic Law of Hong Kong, the semi-autonomous chief executive is elected by a broadly representative Election Committee and appointed by the Central People's Government.

"Hong Kong could not select a governor who was sent in from London", the strategist stresses. "So you would look at the degree to freedom - this vastly improved since the handover. And of course, according to international institutions like the Canadian Cato Institute, consistently over the past 22 years Hong Kong [has become] the freest economy in the world. Now, you can't be the freest economy in the world if the society is not free. So, the rhetoric that Hong Kong is descending into authoritarianism, into suppression, is overhyped".

On 3 December, Hong Kong Chief Executive Carrie Lam denounced the US Hong Kong legislation as detrimental to the local business environment. She also highlighted that she saw no need for the US bill given that human rights and freedoms were guaranteed by Hong Kong’s Basic Law.

Protests that started emerging in March 2019 over a local government-proposed mechanism to extradite fugitives to mainland China turned violent in June and since then have been rocking the semi-autonomous city. The Hong Kong protesters came up with "five demands" including the full withdrawal of the currently suspended extradition bill, the inquiry into alleged police brutality, amnesty for arrested rioters and universal suffrage for both the Legislative Council and the Chief Executive.