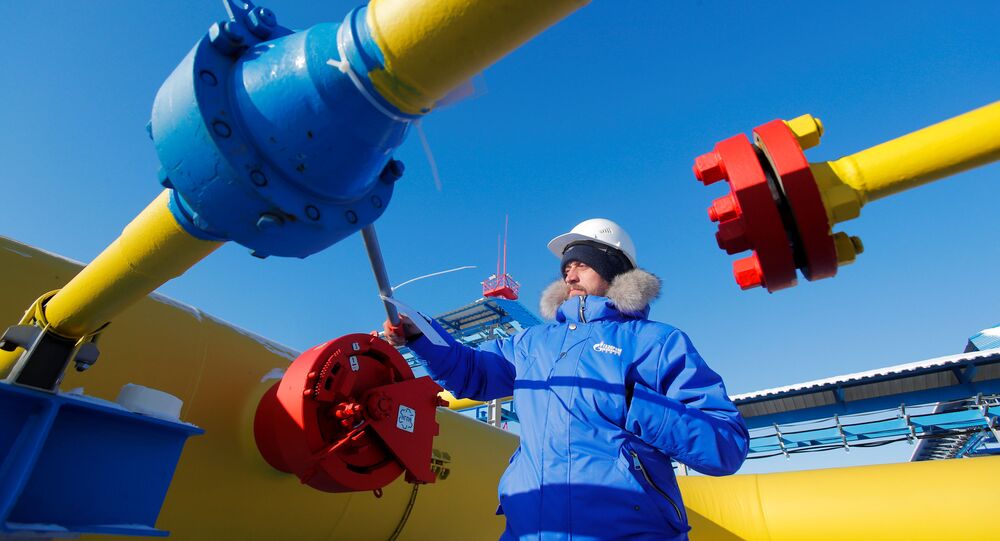 With the completion of a new pipeline connecting Russian gas fields and China’s industrial heartland, the two countries have bypassed US control over the world’s energy markets, giving Moscow new flexibility in European negotiations, which Washington and Kiev have repeatedly attempted to frustrate.

The $400 billion deal between Moscow and Beijing drove the construction of a massive new pipeline from Russia’s remote Chayanda and Kovykta gas fields, the biggest in the country's east, with the Chinese metropolis of Shanghai, crossing the border between Blagoveshchensk, Russia, and Heihe, China, on the Amur River.

The Tongjiang-Nizhneleninskoye railway bridge, completed last week but not opening for traffic until next year, crosses the same gap and is the first road bridge between Russia and China.

Russian President Vladimir Putin and Chinese President Xi Jinping symbolically turned on the pipeline for the first time together on Monday. The megaproject will deliver 42 billion cubic meters of natural gas over the next 30 years.

International affairs and security analyst Mark Sleboda told Radio Sputnik’s Loud and Clear Monday it was the largest deal in the history of the Russian gas industry, which is the world’s largest gas exporter, and a game-changer for Moscow’s foreign policy.

“It is a cross-Eurasian pipeline, and as always, pipelines are economics,” Sleboda told hosts Brian Becker and John Kiriakou. “It’s big money. And it is more than just money, it is also geopolitics, because pipelines are hard energy supplies, and energy supplies like that are national security issues. When pipelines like this are laid, they cement - they are a physical, literal representation of bonds between countries, because both countries become more interdependent on each other, a consumer-supplier relationship around energy, something that every country needs.”

“There’s an environmental aspect beyond the economic and the geopolitical, because this is helping China - as Russian gas supplies are also doing for Europe - to shift away from coal,” Sleboda said, noting that burning the pale black rock is a “huge air pollution problem in Chinese cities” that Beijing has long promised to correct.

“It is also crucial for countries in meeting their carbon targets to help combat climate change, because coal is the dirtiest of the three fossil fuels,” he noted.

Sleboda noted that not only does the pipeline connect to other lines heading westward into Europe, but it will also be connected to the eastern port of Vladivostok on the Sea of Japan by a new branch yet to be built, enabling fuel export via tanker as liquified natural gas (LNG). The ability to shift gas exports back and forth between markets will “prevent Russia from being held hostage to the demands of any one consumer at a time.”

The analyst noted that Russia and the Soviet Union before it were reliable gas providers to Western Europe, which is why Germany has cooperated so readily in building and expanding the Nord Stream 2 pipeline.

“It’s the countries in between, in particular, Ukraine,” that present the greatest obstacle, Sleboda said, noting Ukraine is a “confrontational, divided country with politics that swing back and forth,” and whose political problems have been “holding Europe’s energy supply … hostage.”

The very high transit fees charged by Kiev for gas that passes through the pipeline are paid by Moscow, such that “basically Russia has been subsidizing the Ukrainian economy, to the tune of nearly $3 billion a year, which is about 5% of Ukraine’s GDP, and it’s an even larger share of their national budget, which is only some $40 billion,” Sleboda said. “So Ukraine is extremely threatened by all of this, but gas flows through Ukraine will continue as long as they don’t try to hold the energy relationship between Russia and Europe hostage to their political demands.”

He also noted the imminent completion of the Turkstream pipeline to Turkey, with the possibility of an extension into southern Europe. “So Russia is sending gas connections east, west and south at the same time, and there’s also LNG routes through the Arctic Sea route north as well,” Sleboda said, noting that “Russia really is becoming a gas kingpin and an energy superpower.”

“But more than that,” the ever-growing network of export partners is providing Russia with a “diversification of customers and a multivector foreign policy,” he said.

Sleboda noted that opposition to Nordstream 2 has stirred once again in the US Congress, which remains adamant to hurt Russia however possible but is also paralyzed by the fear of further alienating its own European allies by attempting to dragoon them into buying more expensive LNG shipped from the US. Likewise, he noted the Wall Street Journal’s Sunday story about the Russia-China pipeline claimed the deal was “challenging the economic and strategic clout of the US.”

“How could a pipeline between China and Russia challenge the economic and strategic clout of the US?” Sleboda asked. “That question doesn’t make any sense unless, of course, you recognize that the US is trying to play hegemon to the entire world, where everyone has to have relations through a hub-and-spoke-type relationship through the United States, and relationships between any other two powers are a threat to its control of the world.”