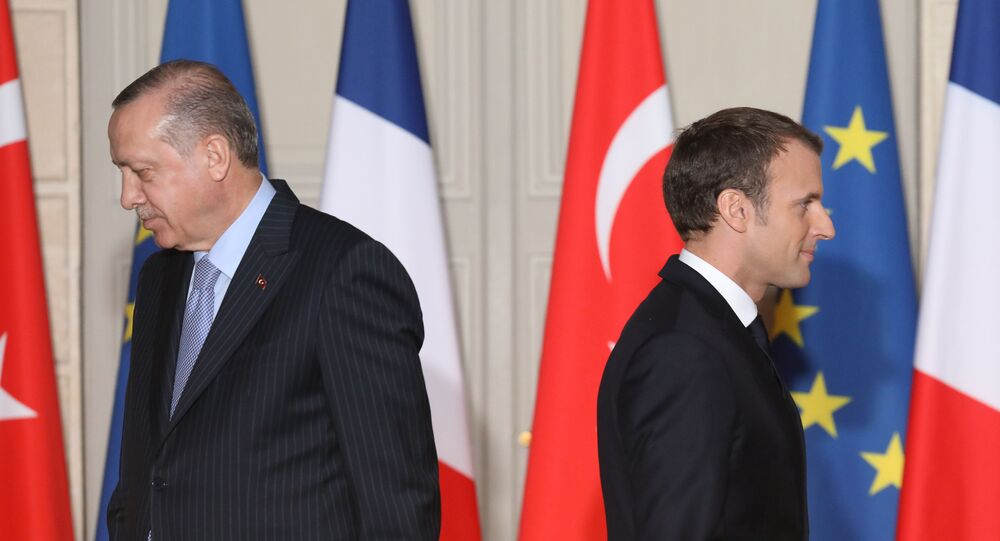 Turkish President Recep Tayyip Erdogan on 29 November slammed French counterpart Emmanuel Macron's comment about NATO during the latter's recent interview with The Economist, claiming that Macron's views on the bloc reflect a "sick and shallow" understanding.

Ali Demirdas, a professor of international relations and contributor to The National Interest has shared his views on the matter.

Ali Demirdas: President Erdogan has slammed Macron because Macron blamed Turkey for weakening the NATO alliance by unilaterally staging an incursion in Syria. Macron puts the blame on Turkey, however, from the NATO perspective he appears to be the one who is undermining the alliance by saying "Russia is not a threat for Europe". (In my opinion, I don’t think Russia is a threat to Europe as both Russia and Europe now need each other).

In 2016, at the NATO Warsaw Summit, Russia has been declared a major "destabilising entity" for Europe. Therefore, by openly calling Russia "not a threat", Macron is technically going against the common defence structure of the NATO alliance.

© AFP 2021 / ATTILA KISBENEDEK
French President Should Check His Own 'Brain Death' - Erdogan on Macron's NATO Comment
In his recent speech, Macron criticised Turkey for its unilateral actions in Syria, but paradoxically he justified France’s presence in Mali and sub-Saharan Africa, while at the same time demanding NATO become a part of France’s "anti-terror" operations. His proposal for NATO involvement in Mali came after President Erdogan asked NATO to take measures in Syria for Turkey’s security.

We need to understand why Macron is making those controversial remarks now. In France, there is an increasing perception that France is losing its influence in its former sub-Saharan colonies. The recent downing of French helicopters in Mali by militants and the resulting death of 13 French soldiers triggered a backlash against Macron. Therefore, by asserting that "terrorism", not Russia, is NATO’s biggest problem, he then can get assistance from NATO which would provide relief in his fight in Africa.

Finally, the recent spat between France and Turkey should be seen as Macron’s increasing uneasiness over Turkey’s rising influence in Syria (a former French colony) and in the Balkans. He has previously stated his concern that "the Balkans are becoming an area of rivalry for the EU, Turkey, and the Russian Federation". At a time when the European Union is becoming anything but a "union", Macron wants to spearhead France’s dominance in Europe. He even clashed with German Chancellor Merkel over NATO’s purpose. Merkel slammed Macron’s remarks about "NATO being brain-dead".

Sputnik: On Friday, the Turkish Ambassador to France Ismail Hakki Musa was summoned to explain "unacceptable statements ... that have no place in Turkish-French relations and cannot substitute for the necessary dialogue between the two countries". What consequences, if any, do you expect for this to have on Franco-Turkish relations? Could the spat impact Turkey's intentions in Syria and Operation Peace Spring?

Ali Demirdas: Summoning ambassadors is not uncommon. On October 31, Turkey summoned France’s ambassador to the Ministry of Foreign Affairs in Ankara to condemn Macron’s remarks about Turkey’s Peace Spring Operation in Syria. Turkish-French relations have survived worse crises.  I don’t think the current crisis is going to have a major negative impact on relations. Finally, France is not in a position to have any impact on Turkey’s Syria policy. Paris simply doesn’t have any leverage over Ankara to do so.

Sputnik: NATO is experiencing problems, including complaints by the US that other members aren’t spending enough on defence and differences over the alliance’s post-Cold War mission, that are expected to come to the fore at the summit in London. Will there be any further split among NATO allies?

Ali Demirdas: Europeans are particularly unhappy with what they consider as Trump’s "bullying" of them. In November 2018, Trump ridiculed the French president "for wanting to build a European army and claimed citizens of France would all be speaking German if it wasn’t for the U.S. in World War II". Europeans now believe America has become very unreliable when it comes to European defence. Therefore, they want to establish their own defence mechanism independent of the US (NATO). German Chancellor Merkel has stated: "The times when we could rely on others are over. This means we Europeans have to take our fate fully into our own hands."

© AFP 2021 / LUDOVIC MARIN
French-Turkish Verbal Spat Over 'Brain Death' Sets Stage for NATO's Upcoming London Summit
The European struggle to get rid of the American "yoke" is underway. The building of the Permanent Structured Cooperation (PESCO), an all-European defence initiative-alternative to NATO, is underway. The only problem is the Europeans lack the military capabilities that would enable them to establish a European army. The only European country that has such capability is Turkey. Interestingly, Germany, France, the UK (not a member of PESCO) and Turkey will hold a quadrilateral meeting on the sidelines of the NATO summit next week. Although the topic of the meeting is officially Syria, I believe Turkey’s contribution to PESCO will be discussed.

Finally, although I don’t expect NATO to disintegrate in the same manner as the Warsaw Pact did, it should be expected that it will gradually lose its functionality.