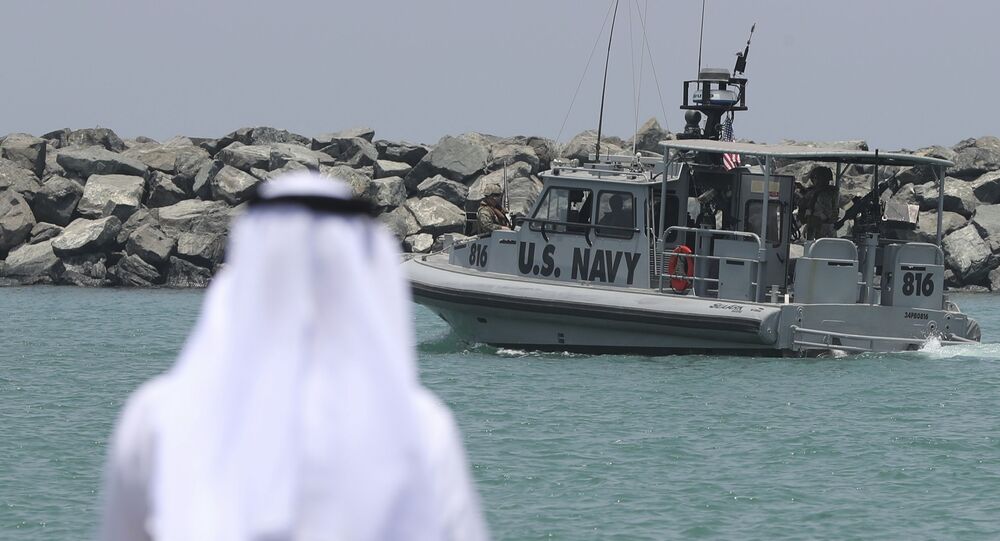 Iran in Crosshairs: Why Some EU States Opt to Distance Themselves From US Op in Strait of Hormuz

The US and Europe are set to maintain two separate security missions in the Strait of Hormuz, one of the busiest sea lanes crucial for energy trade. Analysts Sarah Abed and Alexander Azadgan have explained why some European states started their own maritime initiative instead of joining Washington's operation.

Following a series of mysterious attacks in the Gulf of Oman groundlessly blamed on Iran as well as the 2019 shoot down of an American surveillance drone by Islamic Revolutionary Guard Corps's (IRGC) over the Strait of Hormuz the US and France announced two separate maritime initiatives with a declared aim of ensuring security in the strait where tankers transport about $1.2 billion worth of oil every day.

Europe Doesn't Want to be Dragged Into US-Iran Conflict

In late June 2019, several days after the Islamic Republic downed the American spy drone, US Secretary of State Mike Pompeo came up with the plan called "Operation Sentinel", which was later rebranded to the International Maritime Security Construct (IMSC), in a bid to rally international support in maintaining control over the Strait of Hormuz and other check points in the region.

However, only a handful of states have so far joined the US bloc including Bahrain, the United Kingdom, Australia, Albania, Saudi Arabia, the United Arab Emirates as well as Qatar and Kuwait.  Germany, France and Japan refused to participate in Washington's maritime endeavour with Paris announcing its own security initiative in the region which was joined by the Netherlands on 25 November. According to France's Saturday announcement the maritime mission could start early next year, comprising up to 10 European and non-European nations.

"The main reasons why US allies are declining the invitation to join the US-led naval coalition and are choosing to distance themselves from the super-power are because they do not want to be dragged into a military confrontation between Washington and Tehran, some such as Germany prefer diplomacy, while others such as Japan want to preserve economic and political relations with Iran. In France’s case they still hold out hope for saving the JCPOA [Joint Comprehensive Plan of Action]," says Sarah Abed, and independent journalist and analyst.

In addition, the Trump administration unilaterally withdrew from the Iran nuclear deal a year ago leaving Europe's major states, the signatories to the accords, struggling with the consequences of Washington's move.

"A concern that European nations have is that Washington will exploit the IMSC to carry out their sanctions campaign by interfering with legitimate Iranian commercial shipping vessel missions," he says.

Abed does not rule out that "a few of the nations that have passed on the United State’s call to join their maritime coalition [will] opt for the less intimidating French led option."

Alexander Azadgan, professor of international political economy and editor-at-large with United World International Analytical Center, alleges that the US and Europe are playing a "Jekyll and Hyde" game with Iran "to make the Iranians trust one side and distrust the other."

"For the time being, one of the reasons that Europe is increasingly interested in independence from Washington is basically when it comes to this region in West Asia, our Middle East is all about tapping into the natural gas market to satisfy the natural gas requirements of over 700 million European citizens," he says. "So the difference in their strategy is to maintain somewhat of a friendly relationship with Iran".

On the other hand, the Europeans "want to be able to maintain their national interests without Washington constantly dictating to them and threatening them," he notes citing the fact that US sanctions against Iran dealt a heavy blow to Europe's multi-billion dollar contracts with Iran.

Commenting on likely impact of having two separate naval coalitions in the Strait of Hormuz and the Gulf of Oman, Sarah Abed envisions "a significant amount of coordination between Bahrain and the United Arab Emirates facilities by early next year," adding that both American and French naval missions were founded "under false pretexts."

Apart from Saudi Arabia, Bahrain and the UAE were among the most vocal proponents of punitive actions against Iran following the US withdrawal from the deal. Speaking at the UN General Assembly in late September, UAE Foreign Minister Sheikh Abdullah bin Zayed and Bahrain’s foreign minister Sheikh Khalid bin Ahmed claimed that the JCPOA failed to change Iran's "behaviour" and accused the Islamic Republic of supporting "terrorism."

Focusing on the French-led initiative, Azadgan predicts that it "would attract… some of these anti-Russian, Eastern European countries, who are half way part of Europe and half way trying to preserve their national sovereignty model."

"I don't foresee much cooperation from Scandinavian countries, although Denmark could be a partner," he adds.

"We are seeing the end of Washington's neo imperialism in the Middle East and specifically the Persian Gulf states," the academic says. "[The US] has been trying to extort, extort more protection money from NATO and creating fictitious paranoia about non-existent enemies, in particular Iran, China and Russia, and then get more into the order of things to come in the world. Many countries in Europe are not buying that. And as [it] was becoming weaker, from what you're observing, many countries would want to go back to the national sovereignty model and negotiate with other countries on their own."