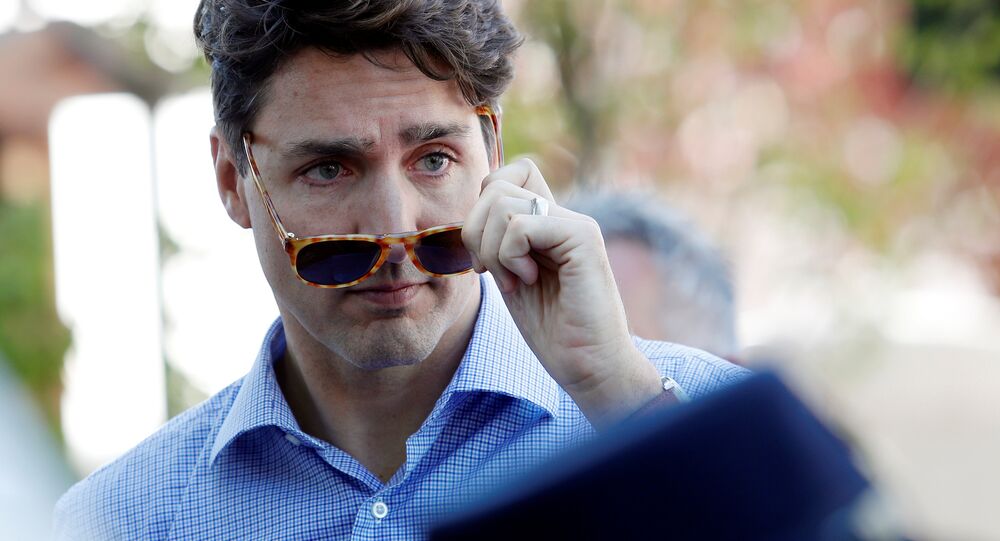 Wexit, the combination of "exit" and "Western", is a movement in Canada calling upon the country's crude-producing regions to bid farewell to the rest of the country and live on their own. Former Canadian Deputy Prime Minister Sheila Copps has explained what's behind the group's agenda.

Following Prime Minister Justin Trudeau's re-election, the Wexit movement has been gaining momentum driven by discontent of Alberta and Saskatchewan, Canada's oil-rich Western provinces, with the federal government’s carbon tax, unemployment levels, delays in construction of the Trans-Mountain Pipeline expansion, and what they see as an unfair equalisation programme.

Trudeau, who is well aware of Wexit, tasked Deputy Prime Minister Chrystia Freeland, a former minister of foreign affairs and "a native Albertan", to tackle the problem. While she admitted that "the election sent a message from the West" and said the federal government was ready "listening really really hard", she fell short of providing details on Ottawa's plans.

On 4 November, Wexit Alberta filed paperwork with Elections Canada in a bid to become a registered party.

"We really do think that we are going to be better off separate from the ruling authorities in Ottawa", one of the movement's leaders, Peter Downing, told CTV’s Your Morning, arguing that the West contributes a lion's share to the nation's wealth while receiving much less back from Ottawa due to the equalisation payments policy.

However, Sheila Copps, who served as a deputy prime minister under the government of Jean Chretien (1993 -2003) and later as a minister of ecology and minister of cultural heritage, believes that the movement is "an instrument in the hands of those who support the oil industry, in an attempt to circumvent the environmental policies of the Trudeau government".

According to her, the group should rather be called "Prexit", as it covers only the oil-rich provinces of the Canadian prairies, and not the entire western part of the country.

The discontent started to grow under the Conservative Party’s Prime Minister Stephen Harper (2006 – 2015) who promised to make Canada an "energy superpower" but failed to build the Keystone XL pipeline and eventually suspended the country's other energy projects amid the oil prices slump in 2014.

© AP Photo / Sue Ogrocki
A section of the Keystone 1 pipeline had to be shut down after just 2 years because of corrosion - the wall had corroded by 95% in one section - but both TransCanada and US federal regulators are keeping the cause of the damage secret, the DeSmogBlog reports.

The former official recalls that under Harper, Conservatives, who commands support in the oil-rich province of Alberta, had not passed a single oil project failing to adopt the country's environment protection standards.

"[However], this province is still rich, only a bit less than before", Copps remarks."If you drive to Calgary, you'll see more SUVs than in any other city in Canada".

For his part, Trudeau is trying to address the needs of both the oil producers and environmentalists by pushing ahead with the Trans Mountain pipeline expansion and laying out a commitment to reach net-zero emissions by 2050.

In 2018, Trudeau's Liberal government purchased the Trans Mountain pipeline for $3.40 billion in a bid to proceed with its extension from Alberta’s oil sands to the Pacific Coast. However, the pipeline project implementation is stalled due to legal challenges from environmentalists and indigenous groups.

At the same time the Canadian prime minister has vowed to step up the fight against climate change. Earlier in 2019, he introduced carbon taxes beginning at $20 per tonne of carbon dioxide equivalent emissions (tCO2e) in 2019 and rising to $50 per tonne. In addition, Trudeau promised to considerably slash subsidies for the fossil fuel industry.

According to Copps, Wexit is stemming from the country's right-wing movement. She recalls that prior to the emergence of the group, Canada Proud, a conservative advocacy entity, was founded in Alberta.

"There was an organisation called Canada Proud that registered and set up four branches. It all started in Alberta, then spread to Saskatchewan, Newfoundland, New Brunswick and Nova Scotia. And the money came mostly from the Manning Foundation, but the operation was supposedly directed against the liberals during the election", she presumes.

On 29 October, Canada Proud called upon "eastern politicians" to "take Wexit seriously", adding that "the future of our country is at stake" in one of its Facebook posts.

The question then arises as to how the new Trudeau government is going to calm the Wexit movement down. According to the former minister of ecology, Ottawa is likely to play the pipeline expansion card.

"They will continue to extend the Trans Mountain pipeline, which will at least help raise prices slightly in Alberta and Saskatchewan", she says. "All income from these investments should go towards the development of a green economy. We must try to carry out the transition to a green economy in these provinces".